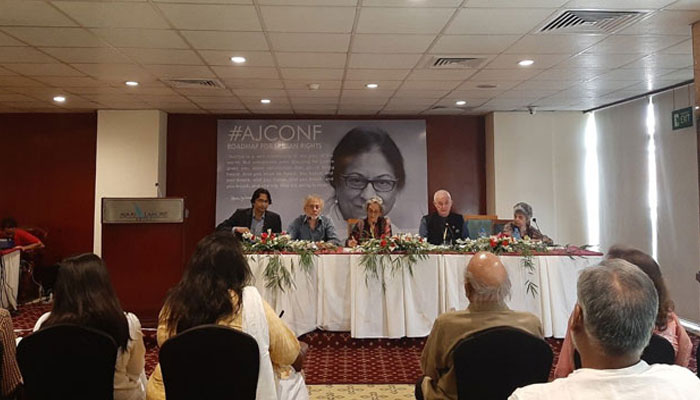 LAHORE: Speakers at the Asma Jahangir Conference here on Sunday termed the current accountability law in vogue in the country a bad piece of law and called for an across-the-board accountability.

Addressing at the Legislative, Judicial & Executive Responsibility towards Accountability session of the conference, former president of the Supreme Court Bar Council Yasin Azad said there was one-sided accountability process going on in the country, smelling of political vendetta.

“Had democracy been allowed to continue in the country, the situation would have been different as even during democratic regimes, the powers did not rest with political forces.”

Terming the NAB law as a bad piece of legislation in violation of the Article 10-A of the Constitution, Mr Azad said under the law, the bureau could keep an accused in custody for six months on pretext of interrogation.

ARTICLE CONTINUES AFTER AD
Mr Azad said the institution of judiciary should strengthen other state institutions but lamented that it had failed to play its due role. He claimed that Justice Qazi Faez Isa case was not filed with the consent of the government. He questioned whether the incumbent government was corruption-free as 80pc of ruling members were from the tainted Musharraf regime. He also asked why treason case against Musharraf was not being persuaded.

PML-N MNA Shaista Pervaiz Malik admitted that her party government had failed to amend the NAB law. She said the judiciary was losing trust of the masses as institutions were transgressing their constitutional role, the establishment was conducting election while the judiciary was meddling in affairs of medical and educational institutions and construction of dams.

PTI Senator Waleed Iqbal said accountability process would be initiated by military rulers but regretted that most of the political leadership had also been grown in the pots of dictatorships and thus inherited the mindset of the dictators in handling its rivals.

Acknowledging the late Zulfikar Ali Bhutto’s two services for the country, giving the 1973 Constitution and making the country a nuclear power, he recalled that the former PM had inducted 5th Amendment to the basic law just to sack the then chief justice Sardar Iqbal. He also recalled Nawaz Sharif’s efforts to become ‘Ameerul Momineen’ through the 15th Amendment.

Claiming that Federal Law Minister Faroogh Nasim had finalised a draft for amending the NAB law, the senator also spoke against ‘misuse’ of the Constitution’s Article 62-1-f and termed disqualification for life of Nawaz Sharif and Jehangir Tareen as (legal) excess.

PPP Punjab president Qamar Zaman Kaira said the establishment always used the corruption card against politicians while the judiciary connived with the dictators to amend the constitution as per their will. He lamented that only financial corruption appeared in the national discourse while corruption in (mis)use of one’s powers and authority was overlooked. He said that civil and military bureaucracy overtook the country after the death of Quaid-i-Azam and Liquat Ali Khan and the governance system was disallowed to function.

Giving credit to his party for removing most of the amendments introduced by the dictators in the 1973 Constitution, he said 18th amendment was not yet being accepted by some forces and being powerful those were openly speaking against it.