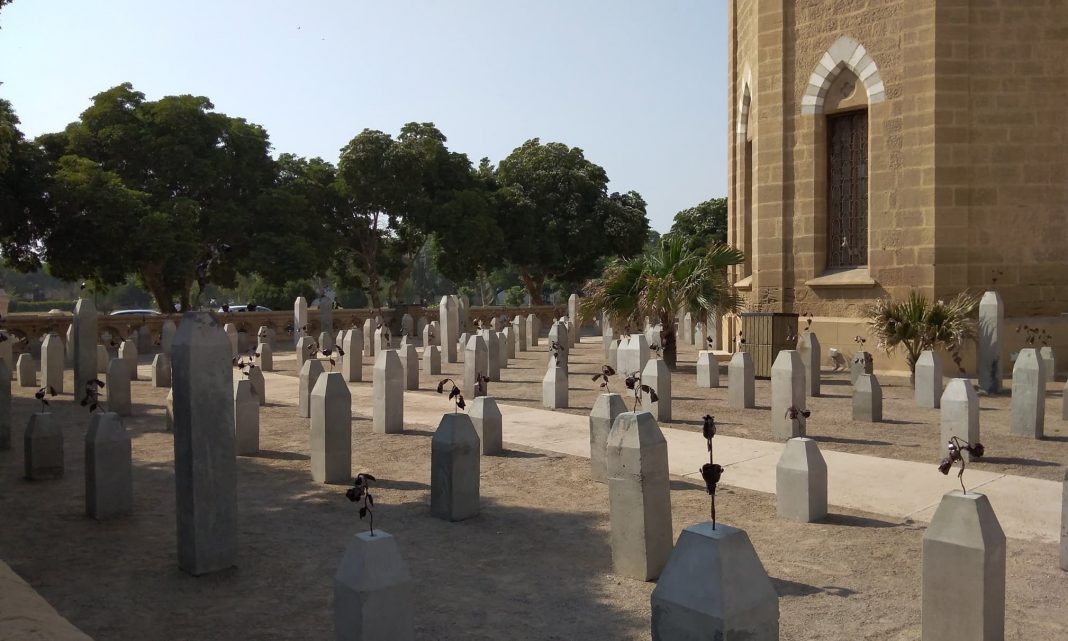 ‘The Killing Fields of Karachi’, an art installation by Adeela Suleiman at the Karachi Biennale 2019 was forcibly shut down on 27th of October 2019.

On Sunday morning, men in plainclothes arrived at Frere Hall where the exhibition was on display and ordered the closure of Suleiman’s exhibit. The installation was part of the Karachi Biennale, organized under supervision of the Karachi Metropolitan Corporation (KMC).

‘The Killing Fields of Karachi’ features 444 gravestones, representing the alleged extrajudicial killings carried out under the supervision of senior police official Rao Anwar. The exhibit also showcased a documentary on Muhammad Khan, father of Naqeebullah Mehsud, the young actor who had been slain in a purportedly fake encounter. His death sparked nationwide protests and eventually led to the formation of the Pakhtun Tahaffuz Movement (PTM).

On Sunday evening, civil rights activist Jibran Nasir and founding member of the Pakistan Institute of Labour, Education and Research, Karamat Ali organized a press conference at the venue to denounce the incident. However the press conference was disrupted and ended abruptly by Karachi Metropolitan Corporation Parks Director General Afaq Mirza, who ordered the organisers to shut it down.

In a statement to the media, Ali said, “We hoped Anwar would be punished for his crimes, but today’s events clearly show he and others like him are being protected.”

KMC Parks Director General Mirza, later speaking to the media, claimed that KMC had not ordered the closure of the exhibition earlier in the day and suggested it was “V Corps”.

Jibran Nasir did not hold the Sindh Government responsible.

“Therefore, the PPP couldn’t have anything to do with this. The police do not have the courage nor do they dare to take a stand against law enforcement agencies.”

THE LAWS AND OUR RIGHTS

This forcible shut down of art exhibitions and press conferences is against the Constitution of Pakistan, which guarantees fundamental freedom to its citizens. Article 19 ( all related articles) guarantee the right to freedom of speech and expression, as well as press freedoms.