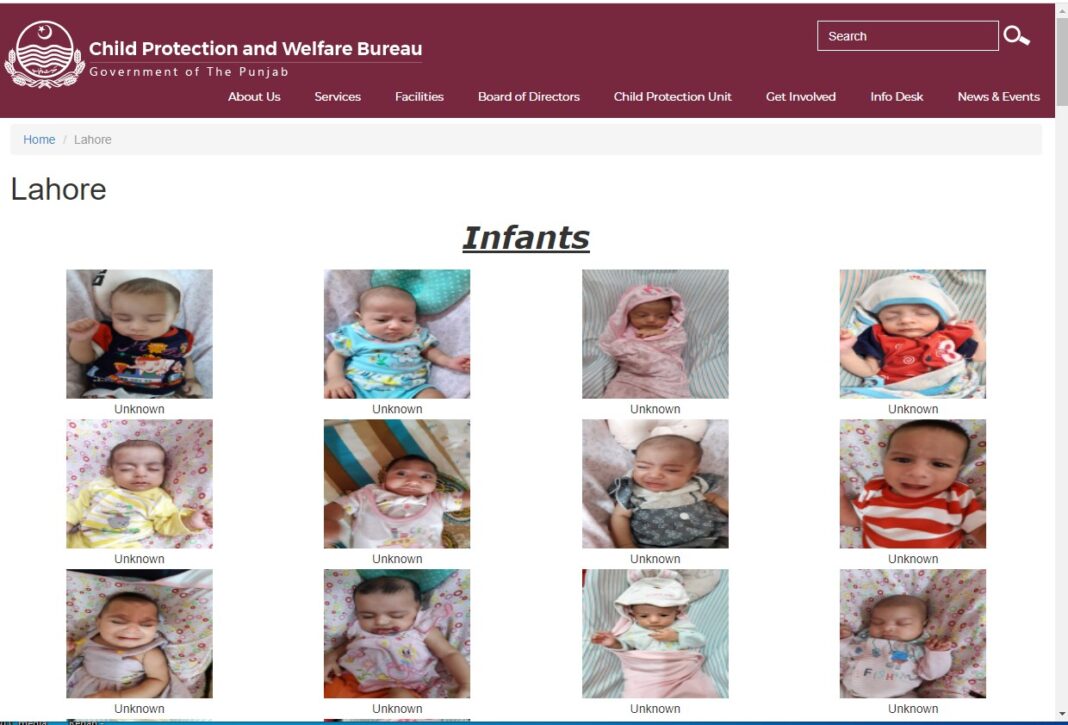 The Punjab Child Welfare Protection Bureau has 200 children in its care whose parents have not been traced over many years, Voicepk.net has learnt.

According to sources in Punjab Child Welfare and Protection Bureau, there were 200 children housed with the bureau whose families were untraceable for many years. These missing and lost children included infants and boys and girls up to 18 years of age.

Some of these children were placed in the care of the bureau over five years ago. The children are housed in the bureau’s facilities in Faisalabad, Gujranwala, Lahore, Multan, Rawalpindi, Sialkot, Bahawalpur, Rahim Yar Khan and Kasur.

In addition to these children with untraced parents in the province, police have not been able to trace missing children in 300 cases.

The provincial police chief gave the figure of unresolved cases of missing children while responding to a question by the Supreme Court about the number of cases in which the provincial police force had not been able to trace missing boys and girls during hearing of a missing girl’s case in Islamabad on January 5.

Inspector General of Police Rao Sardar Ali appeared before the Supreme Court on a court order in the case of Sobia Batool, a girl missing from Sargodha for over a year. The court expressed concern over the failure of Punjab police in tracing out her and directed the police chief to personally supervise her case.

Justice Maqbool Baqir, head of the three-member bench, reminded the police chief about responsibilities entrusted to him by the State. “Mr IG, you have to bring peace to these 300 families,” Justice Baqir told the provincial police chief.

Justice Qazi Muhammad Amin remarked that the police should also identify parents of children begging on the streets, adding that people had forsaken child beggars in their comfortable lives.

Earlier, Justice Amin observed that the search for the Sargodha girl was started very late. Justice Baqir questioned the police chief about the accused had said in the investigation The provincial additional advocate general informed the court that the police had accessed the call data of the accused kidnappers while search for the girl’s recovery was in progress.

Justice Amin told the senior police official that they had to go beyond the past. The present system had failed, observed Justice Amin. Along with the forensics, there were also human resources, the court added. “Had a good SHO (station house officer) been appointed, this case would have been resolved by now,” Justice Amin observed.

Justice Baqir asked the Punjab IG as to why the missing girl was not yet recovered to which the police chief sought sometime and said efforts were underway.  He assured the court that its order would be implemented in letter and spirit. The Supreme Court adjourned the hearing for one more month to allow police to trace the missing girl.