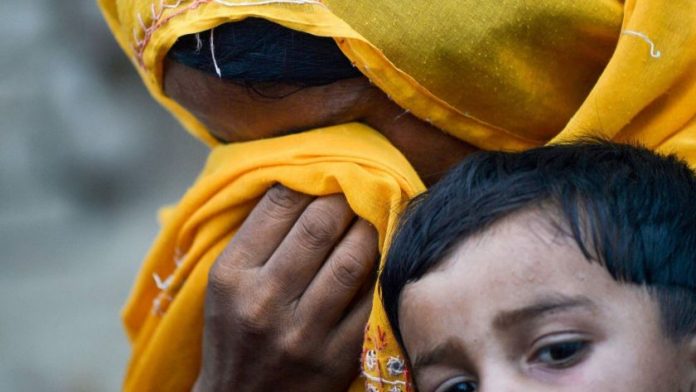 Kausar Leghari is a woman who is desperate for the custody of her children and for this she has been protesting outside the Karachi Press Club for days.

Years ago, Leghari was a victim of domestic violence. Her husband, Ali Ahmed, would regularly torture her, and not give her any money to run the house, feed the family or pay for the children’s schooling. Then Ali Ahmed left her in the lurch to earn and raise the children alone. But now that Ahmed has filed for a divorce, Leghari is fearful that her children, whom she has single handedly provided for, will be snatched away from her.

This is why she has travelled 600 kilometers from her residence in Daharki (a city in Sindh’s Ghotki district) to Karachi Press Club, where she has planted herself firmly near the entrance wall, eager that her demands for the protection and custody of her children be heard by the world.

“My former husband, Ali Ahmed, divorced me and then falsely accused me of running off with another man,” she says. “How can he level such allegations against the mother of his own two children? I have not run away with anyone, I have not been taken away against my will, I am with no one but my children,” she tells Voicepk.net. “My family keeps telling me to return my boys to my husband. They want to hurt me.”

According to the Islamic laws for Sunni Muslims, the mother is entitled to the custody of her child up until the age of seven years for males, and puberty for females. The only exceptions to this include if the mother is deceased or has been determined by the courts to be a danger to the child, or is not a fasiq (sinner) or kha’in (dishonest). A former Justice of the Sindh High Court (SHC) and ex-Advocate General Sindh, Barrister Khawaja Naveed Ahmed argues that legally Leghari’s children cannot be separated from her.

“In our society, it is very common to see homes where the husband abuses his wife and threatens her with snatching away the children if she dares to demand a divorce,” he says. “Most women do not know that if they obtain a talaq or khula, they will not only be awarded custody of their children, but also receive alimony,” he explains. “This is not some common law, but that which is ordained by Sunni Islamic jurisprudence.”

Leghari is going to all possible lengths for her children. After her divorce, her father has been pressing her to remarry, however she has refused as her children are now her only priority.

“My father gave me to Ali Ahmed, and look how I ended up, it was a bad decision,” she laments. “What makes him think he can do better making a second match for me? I do not want to get married again, I am happy with my children.”

Even if a woman remarries after a divorce, Barrister Ahmed states that a child’s custody is awarded to the mother as was exemplified in recent Supreme Court verdicts.

“Objections raised against a mother’s character are rarely ever entertained or proven. Mothers can easily invoke qazaf (the offence of making zina accusations) against anyone questioning their modesty in divorce and custody proceedings.”

However other legal experts contradict Barrister Ahmed and say that some judges rely on Islamic law to deny custody of the child to the mother, as the man she marries is not blood related or is not a mehram of the child.
In the past 17 months, 14,943 cases pertaining to divorce, child custody and alimony were received in family courts across six districts in Karachi. Around 6,000 such cases were brought to court in the first five months of 2019 alone.

According to rights activists and representatives of the Aurat Foundation, a child’s custody should be awarded to the mother while the father should provide child support. Activist and Resident Director at the Aurat Foundation Manhaz Rahman explains that most marriages fall apart due to domestic abuse and emotional trauma. Rahman says men are taught that they are superior to women in all respects and in Pakistani culture maltreatment of women is therefore justified.

Meanwhile for Leghari, day and night become one, as she sits alone, outside the wall of the Karachi Press Club, with her little children, determined to keep them with her.