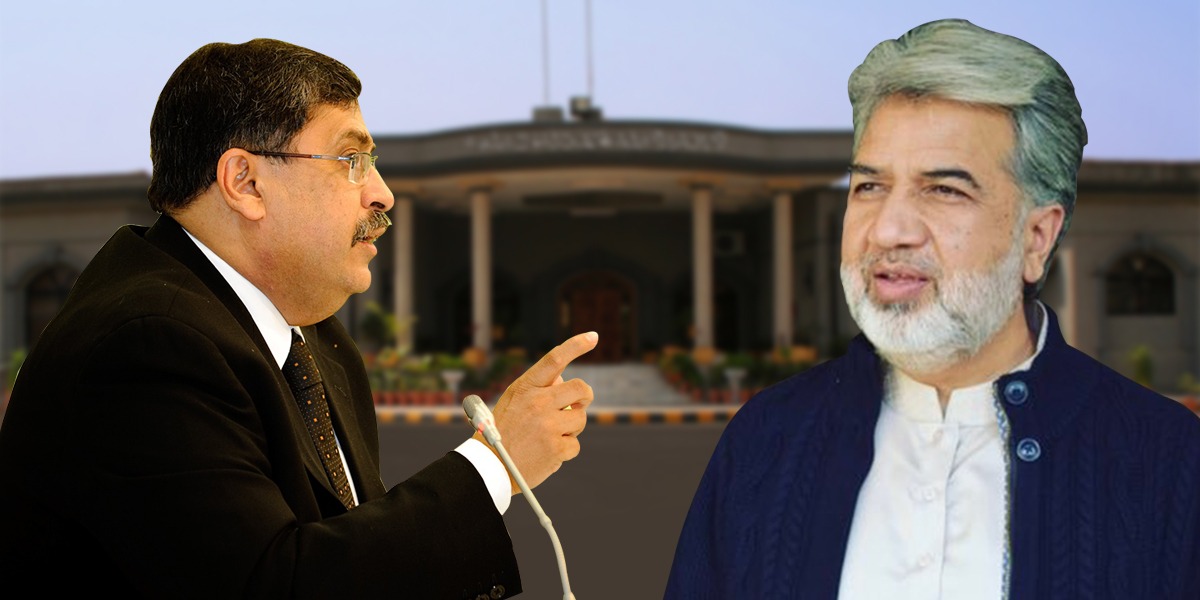 Senior journalists and international media rights organisations have called on the Islamabad High Court to review its decision to indict journalists for contempt over a story on affidavit of former chief judge of Gilgit-Baltistan Rana Shamim.

In the affidavit, Shamim has accused former chief justice of Pakistan Mian Saqib Nisar of colluding with others to deny bails to PML-N leadership prior to the 2018 elections. Ansar Abbasi, Editor Investigation of The News paper, filed a report based on the leaked affidavit in November.

Consequently, Chief Justice Athar Minallah of the Islamabad High Court took notice of the report and issued show-cause notices to Abbasi, The News Publisher Shakil-ur-Rehman, The News Editor Amir Ghauri as well as Shamim under the Contempt of Court Ordinance. In the last hearing, Chief Justice Athar Minallah announced that the court would frame contempt charges against Shamim and the three media persons on January 7.

Following the court’s decision to indict the journalists in the case, senior journalists and international media journalists have rallied behind the accused journalists as their indictment over a verified report would be against the norms of journalism practiced worldwide.

In a tweet on December 30, Steven Butler, Asia Program Coordinator of the Committee to Protect Journalists (CPJ) said the indictment would negate freedom of the press in the country.

“No journalist should face contempt charges for reporting a verified story. Pakistan boasts of press freedom. Freedom of the press means freedom to report the news,” Butler said in his tweet.

In a statement, Reporters Without Borders (RSF) called on the Islamabad High Court to drop its contempt proceedings against the journalists.

“The information revealed by Ansar Abbasi and The News International shines a light on public interest issues that are absolutely fundamental to the rule of law in Pakistan,” said Daniel Bastard, the head of RSF’s Asia-Pacific desk.

“We call on Justice Athar Minallah to rise to the challenge of this affair of state by immediately abandoning the proceedings against The News International’s journalists. Both respect for press freedom and judicial independence – two pillars of democracy that are routinely endangered by pressure from Pakistan’s all-powerful military – are at stake in this case,” Bastard said.

Freedom Network Pakistan has also expressed utter disappointment over the Islamabad High Court order to set date for the indictment of the three media persons in the contempt case.

Iqbal Khattak, Executive Director of Freedom Network Pakistan, said the indictment would set a wrong precedent for investigative journalism in the country. “The court’s decision to indict journalists will hurt press freedom in the country,” Khattak said. He said the media was a messenger in the case and not the person who committed the contempt, adding that involving media in the case was tantamount to shooting the messenger.

The Council of Pakistan Newspapers Editors (CPNE) expressed concern at the court’s decision to indict the journalists in the contempt case.

“It is beyond comprehension to hold the trial of journalists on contempt of court charges as they are duty bound to bring facts into the limelight with no mala-fide intention,” the CPNE office-bearers said.

“Safeguarding of laws and their interpretation is the responsibility of the judiciary but such actions against journalists are tantamount to suppressing the freedom of expression at the international level,” the CPNE office-bearers said. The CPNE requested the court to review its decision of framing charges against the journalists.

Zaffar Abbas, Editor of Dawn paper, requested IHC chief justice Athar Minallah to review his decision to charge journalists for contempt. “Sir, journalism is not a crime. If I had access to this affidavit, I would have done exactly what Ansar did—do a story after proper verification of its authenticity,” he said in a tweet.

Azhar Abbas, Managing Director of Geo News, called the court’s decision a defining moment for all journalists who would now also face court action on a verified report.

“Quite a defining moment for all journalists, Editors and News Directors. What kind of a precedence will be set if a journalist is punished for publishing a story even after verification,” Azhar Abbas tweeted.

“However, a journalist was not bound to verify the content of an interview or sworn statement like an affidavit as in this case because the person making the claim is responsible for its veracity,” he told Voicepk.net. It would be a great setback for media freedom in the country if the court punished these journalists, he said.

“These journalists have followed the rules of journalism practices followed all over the world and if the court still act against them, it would definitely be a setback for all journalists,” he added.

Chief Justice Athar Minallah has often highlighted the importance of media freedom for the rule of law in the country.

“There is no concept of an independent judiciary without a free media and freedom of opinion,” Justice Minallah said recently in his address at the Asma Jahangir Conference in Lahore.

“The state and its agents cannot be allowed to use power and authority to silence voices and to retaliate against critical reporting or dissent. Only informed citizens having access to an independent and free press can ensure progress, prosperity, and security of the state,” Chief Justice Athar Minallah wrote in his detailed order on journalist Rana Muhammad Arshad’s petition against the Federal Investigation Agency in November last year.