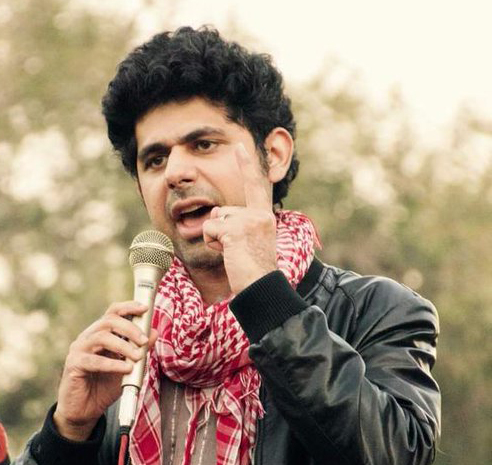 After social activist Ammar Ali Jan evaded police arrest last evening on a detention order, the news provoked strong condemnation from human rights activists and organisations as he announced that he would approach the courts on Monday for cancellation of the detention order.

In light of a detention order issued by the Lahore Deputy Commissioner, police tried to arrest Ammar Ali on Main Boulevard in Gulberg as he was leaving Charing Cross which was the venue of the students’ march. “I would have been in prison by now if my comrades did not resist attempts to arrest me,” Ammar Ali Jan said in his tweet.

“We will not move an inch back from our politics that is to strive for free education, student unions, better and respectable life for the poor and marginalized,” one of his fellow activists, Haider Butt, said in his tweet.

“Whatever they do, we will not stay silent,” said Ammar Jan’s wife and fellow activist Tabitha Spence. “We believe the future belongs to all of us, not just those with money or from the right place. We will never stop struggling for meaningful equality, democracy and justice, no matter where we are.”

According to the Deputy Commissioner’s detention order dated 26th November, Ammar Ali Jan posed a grave threat to public safety and maintenance of public order based on a letter of the Lahore DIG operations and other evidence. “The Superintendent of Police, Civil Lines Division and in-charge, District Intelligence Bureau, have recommended Ammar Ali Jan’s detention order 03-MPO 1960, for a period of 30 days in order to keep the law and order situation in the city,” the order said. The order said Ammar Ali Jan should be arrested and his custody placed under the Superintendent of the Kot Lakhpat Jail.

On Friday, Ammar Ali Jan was participating in the Students Solidarity March along with other activists at Charing Cross. Police officials were closing in on Ammar as the march was reaching its conclusion,” said Haider Kaleem, activist and journalist, who was driving Ammar Ali Jan’s car. Kaleem said that they left the venue in a car upon getting information of the detention order of Ammar Ali Jan from a fellow journalist. However, police officials followed the vehicle and four policemen on motorcycles signaled them to stop on Main Boulevard as the car slowed down due to a jam in traffic. Kaleem said a police van had also arrived on the spot by then. We locked ourselves in the car and did not come outside. However, police officials forced one door after lowering a window pane of the car. Kaleem accused police officials of manhandling him, Haider Butt and Ammar’s wife.

Ammar Ali Jan said police officials misbehaved with his wife saying ‘such behavior is totally unacceptable under our cultural norms’.

According to Ammar Ali Jan, the police negotiated with them for some time as a huge crowd had gathered around them. “The police officials allowed us to leave on condition that we report to the police station within two hours,” Ammar Ali Jan said.

Police stopped Ammar and a group of activists after #StudentSolidarityMarch and manhandled them pic.twitter.com/xQukztdTwo

The social activist said he was surprised by the detention order as he had assured the district administration and senior police officials in a meeting that the march would be peaceful and there would be no anti-state statements. “The march participants only talked about what is written in the Constitution and about ending the class structure in the education system. If that is unacceptable then they should change the Constitution,” he said.

“(Such) tactics nor will we stop our campaign for a classless education system. We are proud to support the youth in their struggle for justice,” Ammar Ali Jan tweeted, adding that senior lawyers will plead our case on Monday at the Lahore High Court.

In February last year, Ammar Ali was arrested from his residence after participating in a protest against the killing of Pashtun Tahaffuz Movement leader Arman Looni. He was later granted bail in the case.

The arrest order against Dr Ammar Jan has sparked condemnation and fury across the board. Human rights defenders and students bodies have raised their voices against this act by the government and say the demonstration had been peaceful with no reason for any police crackdown or arrests.

In a statement, the Human Rights Commission of Pakistan condemned the detention order, calling for the notification to be withdrawn immediately. “For the state to intimidate citizens who are asking for fundamental rights is a cowardly tactic,” the HRCP said.

HRCP condemns the notification issued by the DC Lahore, ordering one month’s detention of academic @ammaralijan. The order must be withdrawn immediately. For the state to intimidate citizens who are asking for fundamental rights is a cowardly tactic. #FreedomOfAssembly

In a tweet, senior journalist Munizae Jahangir said it was shocking that the Punjab government would issue arrest warrants for Ammar Ali Jan only because he held a peaceful Students Solidarity. “Is this the same PTI that called itself the party of the youth and claimed their right to protest violently even in 2014,” she said.

Shocking that Punjab Govt would issue arrest warrants for .@ammaralijan only because he held a peaceful #StudentsSolidarityMarch2020 https://t.co/cveXjGRQu8 this the same PTI that called itself the party of the youth & claimed their right to protest violently even in 2014?Shame!

Similarly, South Asians for Human Rights (SAHR) said the body was deeply concerned that in Pakistan activists, progressive intellectuals, critical journalists and the political opposition are targeted and harassed for exercising their rights. SAHR chairperson Dr Radhika Coomaraswamy called on the Police to immediately remove the detention order and stop the harassment of activists. “We further call on the Government of Pakistan to ensure the protection of activists who are being subjected to unlawful detentions and address impediments in exercising the constitutional rights,” she said.

Dr Radhika Coomaraswamy said the constitution of Pakistan recognizes freedoms of assembly, association and speech and it is disturbing to note that the rights of these persons are violated under the guise of danger to public peace.

Awami Workers Party, Punjab, also strongly condemned the arrest order. “We believe this is an intimidation tactic to deter not just Ammar Ali Jan but also to silence dissent in the country. We demand that the FIR should be taken back immediately,” the party said in a tweet.

Awami workers party Punjab strongly condemns the arrest order of Dr Ammar Ali Jan. We believe this is an intimidation tactic to deter not just Ammar Ali Jan but also to silence dissent in the country. We demand that the FIR should be taken back immediately #ReleaseAmmarAliJan pic.twitter.com/5eQbq81HDd

“We are in the midst of overlapping crises- health, climate and economic- and everything about how the dominant order functions is quite clearly defunct and needs to be completely transformed,” says Tabitha. “That’s why they are scared of young people asserting their rights and insisting on meaningful democracy, from the campus to the workplace.”

With additional information by Haider Kaleem and Hamid Riaz