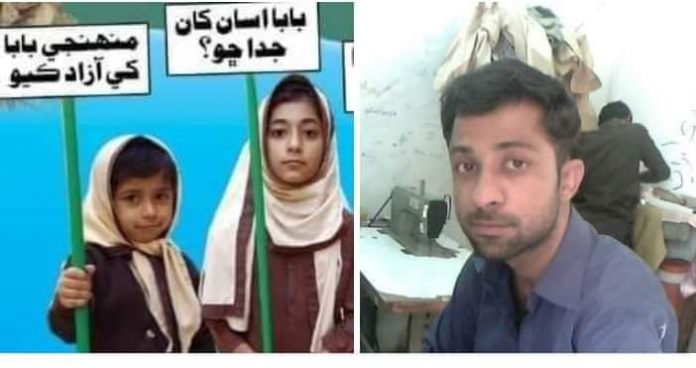 Rafique Umrani was a tailor by profession and a father of five. But for his family he might as well be dead.

On September 17, 2017, Umrani was abducted by plain-clothed officials from Nazar Street, Larkana, and to this day, his whereabouts remain a mystery. His family, including his young daughter, have been consistently protesting for his release, but to no avail.

In fact, the number of missing persons has been increasing in Sindh, much like Balochistan, and men are being picked up without any warrants by unknown people, without their family’s knowledge. Some have been released but others are still missing, some for years.

“Enforced disappearances are a flagrant violation of the law and usurp the fundamental human rights of the citizens,” says a protestor Norri Joyyo.

Hani Baloch has also suffered the abduction of a loved one. A few years ago her father Abdul Wahid Baloch was abducted by unknown people from their home in Karachi, for the release of whom she led a nationwide march, and now her fiancé Naseem Baloch is missing since a year.

But even Hani herself was abducted about a year ago. “A few days after my fiancé’s abduction, I was also picked up by plainclothes men,” she says. She was released after three months, but Naseem’s whereabouts remain unknown.

Both Hani and Naseem are educated citizens of the country – Hani is a medical student, while Naseem is a lawyer. Hani alleges that she has been receiving threatening phone calls asking her to stay away from protests, but she refuses to back down.

“Abducting people in the dead of night is in direct conflict with the constitution of our country, if these people have committed a crime then they should be produced before a court of law and be allowed to plead their case properly,” says Veerji Kolhi, Special Assistant on Human Rights to the Chief Minister of Sindh.

“Such actions tarnish the image of our country and must be halted,” he remarks.