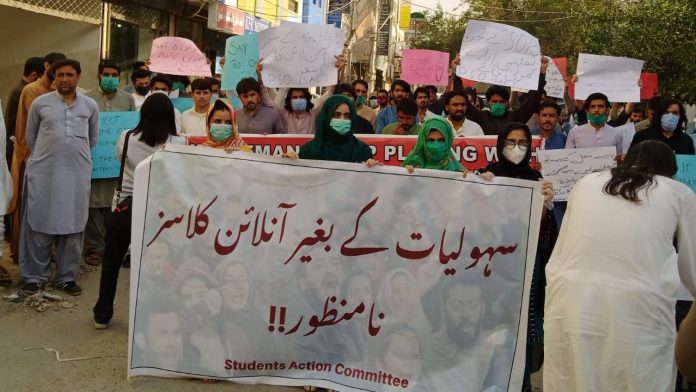 Despite the threat of Coronavirus, hundreds of university students staged protests in more than 35 cities across the country against the system of online classes and fee hikes.

The demonstrations were held on the call of Progressive Students Collective, Baloch Student Alliance, and Revolutionary Students Federation. According to the organizers, Tuesday’s protests were symbolic and they did not mobilize a large number of students on purpose, in order to observe as much social distancing as possible along with following other SOPs too.

Haider Butt, who organized the protest outside Lahore Press Club (LPC) said that the students had been knocking at all doors and had aired their issues about virtual classes since the start of lockdown.

“Authorities have made promises with us multiple times to get the issues of students resolved but no concrete steps have been taken by them,” says Butt. “The non-
serious attitude of the government has pushed students in a catch-22 situation where they are risking their health to save their future.”

According to Pakistan Telecommunication Authority (PTA), only 37 percent of the country’s population has access to 3G/4G internet services. Talking about this digital divide, Dr Ammar Ali Jan formerly an Associate Professor in Lahore’s FC College said that either the government provides free internet access to all the students or it must immediately halt online classes and delay examinations otherwise the future of these students will be at stake.

The other important demand put forth by the protesting students was a reduction in university fees. The students said that since the campuses have been closed the universities do not have to spend a hefty amount on utilities and non-academic facilities. They demanded that this reduction in expenses should also be passed on to students by slashing their tuition fees.

Echoing this demand of students, Dr Ammar Jan said that the lockdown has adversely affected the economic situation of millions of households in the country.

“Charging full fees from the students in this situation is clearly an injustice. Many students have been compelled to leave their studies,” he said. “This is an injustice not only with students but also with the future of this country.”

In Quetta, dozens of students gathered outside the Quetta Press Club to demonstrate against online classes. The students said that they have repeatedly contacted the Higher Education Commission (HEC) and told the officials about their grievances about the virtual classes but absolutely nothing has happened.

Muzammil Khan, the convener of Students’ Action Committee said that the officials sitting in Islamabad were completely ignorant of ground realities in Balochistan and FATA.

“Almost 80% of Balochistan does not have internet connectivity but the government decided to start online classes in the province,” Khan said. “We called for a complete and immediate halt of the virtual classes until the government provides mobile internet service to the entire province. We also demand that university fees should be reduced by at least 70 percent.”

In Karachi, also, students have also taken to the streets to express solidarity with others over the issue of online classes. A number of students carrying different placards and
posters gathered outside the Karachi Press Club to record their protest against the unequal opportunities of learning.

The protesting students said that although in Karachi internet connectivity is relatively better they can understand the problems being faced by the students residing in far-flung areas of KP and Balochistan. Muhammad Ali, a Karachi based student activist told Voicepk.net that in some areas of KP’s tribal areas and Balochistan, people have to travel a lot just to make a simple phone call.

“Now you can imagine yourself how difficult it would be for a student from these areas
to join the online classes,” he said. “The concept of online classes is basically flawed and not feasible with the current resources given to universities and students.”

Students of Gilgit Baltistan (GB) have been facing severe difficulties in getting online education because of the unavailability of internet connectivity due to the mountainous terrain in the region.
The Special Communication Organization (SCO) – a telecommunication wing of Pakistan
Army- is responsible for providing the stable internet in the entire region, but in many areas, people find it difficult to make even a simple phone call let alone use the internet for educational purposes.
Many students studying in the different universities of the country have come back to GB after the lockdown imposed in March. These students are now unable to join the online classes started by their universities. According to such students, they have now started feeling that if regular classes do not resume, their futures will be destroyed.
They have urged the government to allow other telcos to operate in the area and end the monopoly of the SCO so that the people of the area can get better internet connectivity at
cheaper rates.