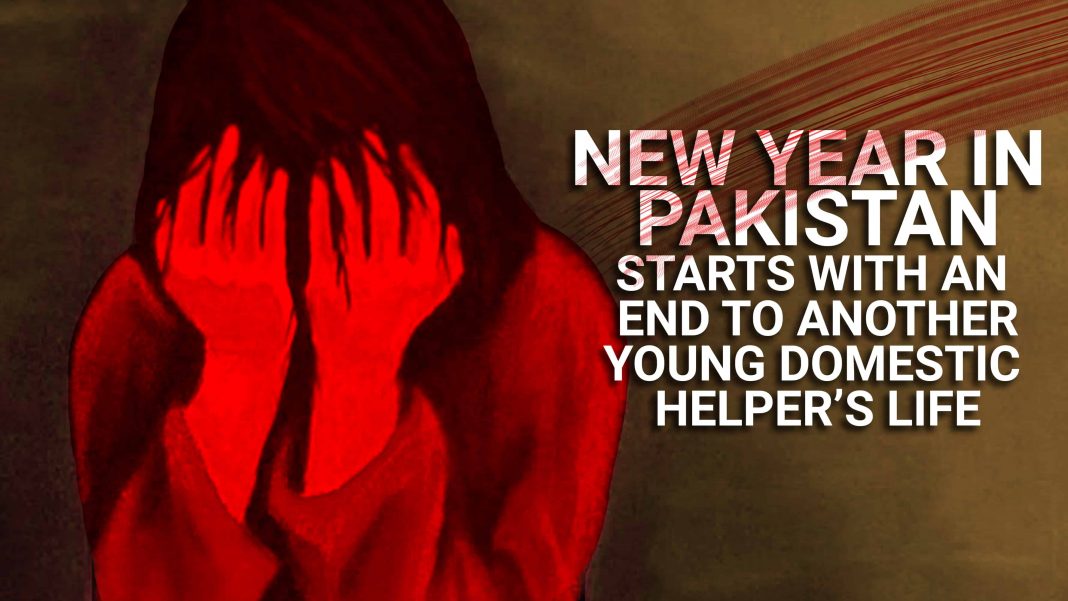 LAHORE: Sana, a 15 year old domestic helper was allegedly tortured and killed by her employer on December 31 in Chung, Lahore.

Investigation officer Ejaz Rasool states that police found bruises and visible marks on the recovered body of the deceased teen, indicating severe and regular physical torture which was later confirmed in the autopsy report on January 3.

Sana’s father, Jamshed Ali, said he had his daughter employed at Dr. Humera’s house in Park View Society as a domestic helper through Zahida Bibi, a resident of Thokar Niaz Baig.

Jamshed stated that when he tried to contact Sana 15 days after she began her employment, Dr. Humera made excuses of her being busy. But after insisting upon speaking to her, Jamshed got to know that Sana did not want to work for Dr. Humera anymore. Jamshed promised Sana to take her back home on January 1, 2020 after returning the remaining advance of Rs. 60,000 that was acquired from Dr. Humera.

Jamshed got a call from Zahida Bibi on the evening of December 31 that his daughter had passed away.

After reaching Dr. Humera’s house with other relatives and looking at the bruises on the body of the deceased girl, they called the police. Jamshed then filed a complaint against Dr. Humera and her husband Junaid for allegedly torturing his daughter to death.

The police collected samples from her body and sent them for forensic examination while the accused Dr. Humera has been arrested and is being held at the Lytton Road Police Station, Lahore.

The 15-year-old was a resident of Hajra Shah Muqeem, Depalpur. According to Sana’s parents, Dr. Humera stated she worked at Mansoora Hospital.

Dr. Humera initially told Sana’s parents that she fell down from the stairs and was given medicine for the injuries. The autopsy noted 26 injuries on the deceased’s body which could not have been the result of falling down stairs. According to investigation officer Ejaz Rasool, Dr. Humera later confessed that she “used to hit Sana for not doing the chores as per instructions sometimes.”

Swabs have also been sent to the Punjab Forensic Science Agency to determine whether or not the girl was also subject to sexual abuse. Results are still pending. Dr. Humera is currently being charged with Section 302 of the PPC for qatl-i-amd (willful murder).

While speaking to voicepk.net, Ejaz Rasool said “This is not a problem of the law but because of a brutal and upsetting mindset that exists in the society”. The police is continued their investigation and vows to follow all aspects and details of the situation so that deceased’s family gets justice through courts.

Khalid Mahmood, Director Labour Education Foundation and member of the child rights movement in Pakistan has been working on child labour problems for more than 8 years. In a statement to voicepk.net, he said “We suggested the government the minimum age limit in labour laws should be at least 18 years because if Article 25-A of the Constitution says that the state should provide free education to children till 16 years of age then how can they allow the children aged 16 years and below to work as domestic helpers or brick kiln workers?”