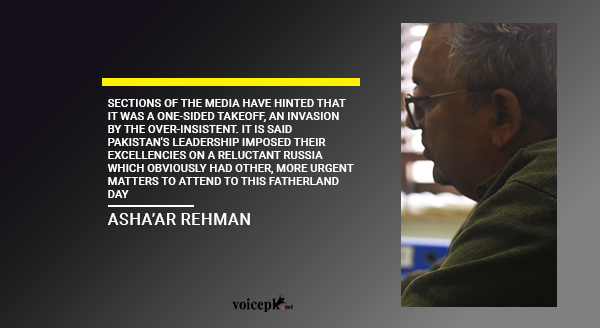 Spring frost has set in the flowers Prime Minister Imran Khan placed on the Tomb of the Unknown Soldier in Moscow to mark the Defenders of the Fatherland Day. The stage has been removed as quietly as it was installed, and both chairs and the pretence of a meeting are gone.

The Russian capital bears little proof of the recent invasion by a Khan into its territory. Imran Khan came, he saw and he left everybody confused.
“There’s been very little coverage of the visit by the Pakistan ruler,” says Saleem, a Pakistani national man working with a private firm in Moscow which is said to be dealing with the feeling of both national pride and uncertainty.
Saleem doesn’t want his real identity made public for it could affect his business. He first came to Russia in the 1980’s and over these long years, he has often been surprised by a dearth of media reports about visits there by official Pakistani delegations. Even then the silence over the meeting between Vladimir Putin and PM Khan is telling, felt as it is against all the noise the ‘forced’ tour has created in Pakistan.
Sections of the media have hinted that it was a one-sided takeoff, an invasion by the over-insistent. It is said Pakistan’s leadership imposed their excellencies on a reluctant Russia which obviously had other, more urgent matters to attend to this Fatherland Day. The Kremlin website had this to say about the union where the two leaders sat close to each other and discussed for three hours issues unbeknownst to the media:
“Talks between Russian President Vladimir Putin and Pakistani Prime Minister Imran Khan started in Moscow on Thursday, February 24, 2022. The main topics of the conversation were bilateral cooperation between Russia and Pakistan, as well as an exchange of views on regional topics…”
So generic as this?No mention of the heavyweight delegation that included government ministers and businessmen, not to speak of the journalists who got to spend a couple of ideal days in the koh-qaaf neighbourhood without having to indulge in any kind of news-making activity? The visit enjoyed a nod by a whole galaxy of foreign affairs experts conferring at Islamabad’s call, Foreign Minister Shah Mahmood Quraishi said upon return to Islamabad. The minister who has surely had more fruitful tours from the capital to hometown Multan appeared in no mood to lose face and more points in the intra-ministerial contest underway inside the Khan cabinet.
In Lahore, another important member of the delegation to Russia, Prime Minister’s Adviser on Commerce and Trade, Abdul Razzaq Dawood said there would be no immediate effect of the Ukraine operation on Pakistan’s business. According to Dawn, the adviser said the country’s total export volume with Moscow was less than $1 billion.
“The good thing is that the door has been opened with Russia and negotiations on such issues have commenced. A meeting has also been scheduled with the Russian trade minister for next week. But the improvement in trade may take around six months,” he explained. Quite matter-of-fact from the minister but maybe not sufficient enough to suppress the drone of negative voices generated by a get-together in Moscow which couldn’t quite mature into a meeting.
There is a surprise at the flight away from the US-Western influence towards Russia and others and a lot of it is pleasant. Yet a general feeling is that the quest for oil and energy lost whatever purpose it had when it became clear that no meaningful dialogue on bilateral issues was possible during the Ukraine-Russia emergency. The details about what’s cooking in the Russo-Pak kitchen will be keenly awaited as the Russian trade minister gets to discuss the issues with Islamabad’s representative, next week according to Minister Dawood.
Unless Mr Dawood is repeating the original mistake: Rushing to discover new paths of friendship in times of war.

Religious debate leads to protest & violence at private college in #Peshawar. Students blocked traffic, damaged college property, & some received minor injuries. College administration blames outside provocateurs & warns of expulsion for those involved. No FIR has been filed yet.