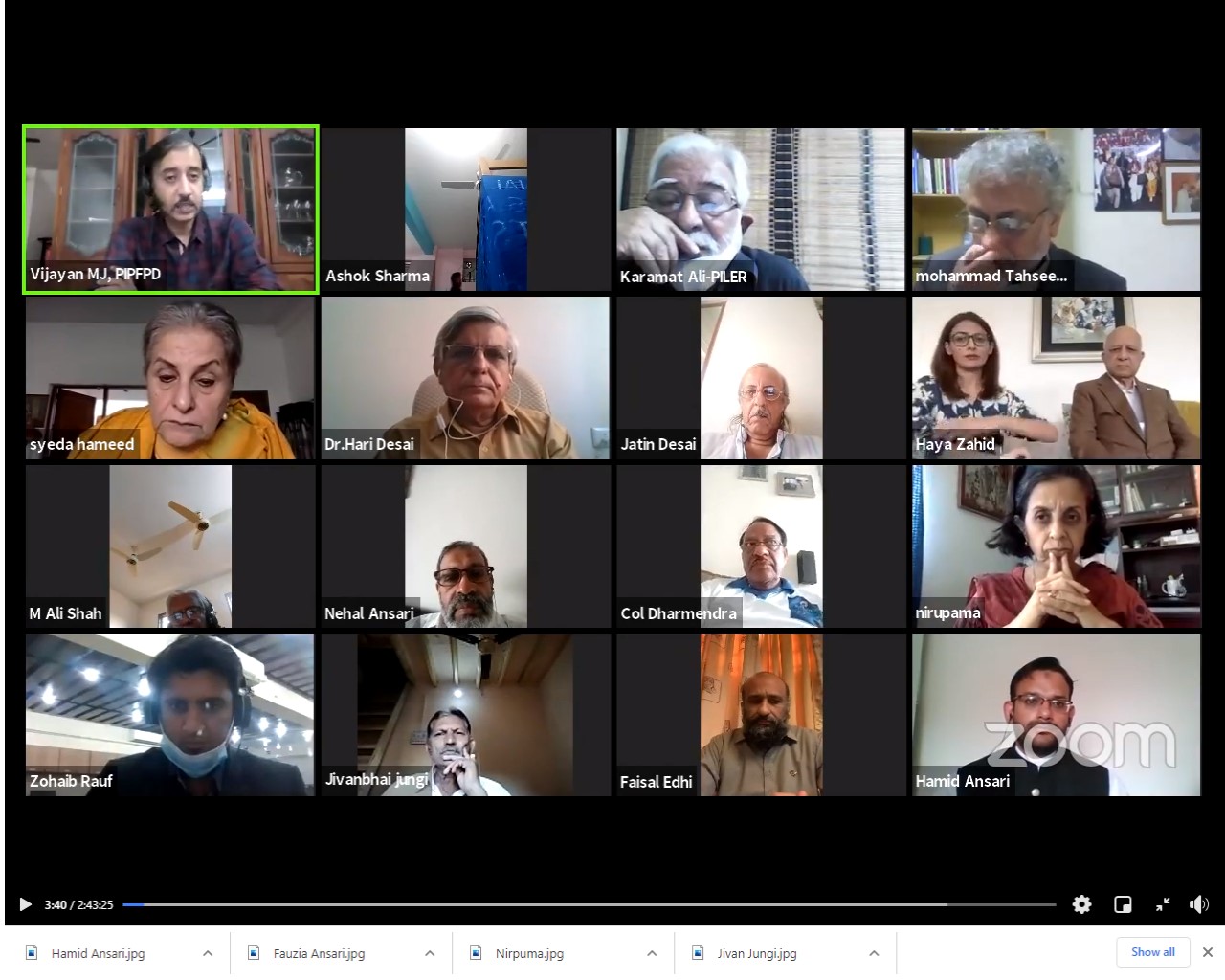 Human rights activists and experts while discussing the plight of Pakistani and Indian prisoners in either country’s jails, have called for the revival of the joint judicial commission on prisoners.

The demand was part of an eight point resolution adopted during the discussion on cross border ‘Prisoners of Contention’ organized by the Pakistan-India Peoples’ Forum for Peace and Democracy (PIPFPD) whjc was held to mark Human Rights Day on Thursday, December 10, 2020.

Apart from the resolution, demands included monthly exchange of prisoners’ list, putting names of prisoners of both countries on the government websites, release of fishermen and women prisoners and prisoners with non-serious charges in wake of COVID-19, allowing prisoners to meet families through online access, implementation of providing consular access within three months as provided in 2008 agreement, confirmation of a prisoner’s nationality within three months if there was consular access, and dead bodies of prisoners to be repatriated within a week of death.

Relating his own experience, Hamid Ansari said, “I was captured in the Pakistan prison on false charges of espionage, but it was my identity and nationality that became my crime.” Ansari was repatriated to Pakistan in December 2018. He said there was a need to repatriate all those criminals who did not have serious charges against them. However, Ansari said many innocent prisoners like himself have been imprisoned on false charges. He said the government in Pakistan had accepted later that he was not an Indian spy. “There are many wrongfully convicted prisoners who continue to languish in prison for years before their cases are even heard. A prison is a place which is now turning into a recruitment centre. Many are innocent and when they reach such places, they are in a rage against the system, and they are easy targets for high end criminals. Jails are not rehab centers. There are rehab centres for hardened criminals. There are people associated with anti-state activities but when they were released they had to go to a rehab centre.”

Ansari said that the perception was if a person was behind bars they are a criminal whether they were guilty or not.

“I was also discriminated against because I was an Indian and I was told so by prison officials,” he said. “There are many prisoners who are repeat offenders, and half the reason is that they do it on purpose because they feel life inside is easier with free food and shelter.”

Hamid Ansari’s mother Fauzia Ansari narrated her ordeal in finding her son. She said the biggest problem at the government level in both countries was lack of communication. “Collecting evidence that he was in Pakistan at all was equivalent to finding a needle in a haystack,” she said, adding a lead was found on a Facebook profile. “If we leave these things to the Government, they have few resources,” she said. Nirpuma Subramanian said that Hamid Ansari was a unique case, as he was repatriated soon after completing his sentence. But consular access was fraught with several problems in almost all such cases. She said there is a constant suspicion on spies from the other side, so they are jailed on that side and their own country needs to work for release. “Being a spy is the first thought that the other country begins at,” she said. “Under the 2008 Agreement which was a landmark agreement and at least two sides exchange lists and they know which prisoners belong to which country. We don’t know if that number is comprehensive but at least there is a number out there. Now the governments know they will be provided consular access,” Nirpuma Subramanian said.

She lauded Fauzia Ansari’s initiative in using social media and emails in trying to find her missing son. “In this day and age the government doesn’t realize that there is technology to make these things happen easier,” she said. “But they won’t use it because fundamentally they use prisoners from each side as pawns, they are used as hostages.”

Jivan Jungi from the National Fishworkers forum (India) said that “politics between the two countries have made the situation of fishworkers dangerous. “Earlier, they used to release the people who used to cross the borders but now the laws are becoming stricter…don’t these people have any rights?” Muhamad Ali Shah from the Pakistan Fisherfolk Forum said the incidents of arrests have increased since the 1980s. “There is a partition of seas, but the colour of the seas are the same. These victims of arrests are sometimes released only when there is an exchange of prisoners from both sides,” he added. Haya Zahid said that in January 88 prisoners in Pakistan had not received consular access. “The Indian side has nominated members for the Joint Judicial Commission on Prisoners but the Pakistani side has not. On this human rights day, they should be pressurised to revive the commission.” She said 279 Indian prisoners in Karachi’s Malir jail had served their sentences. Faisal Edhi from Edhi Foundation Pakistan said, “Many of the fisherfolks who are arrested are illiterate. They are not able to facilitate their cases to the governments. We should be able to help them. The people whose relatives are in Indian prisons are very distressed.” Towards the end of the session, Syeda Ahmed praised I A Rehman and late Asma Jahangir and Dr Mubashar Hassan for their contribution and role in setting up the PIPFPD. Muhammad Tahseen said that it was sad that they were living in countries where poor prisoners are used as pawn.