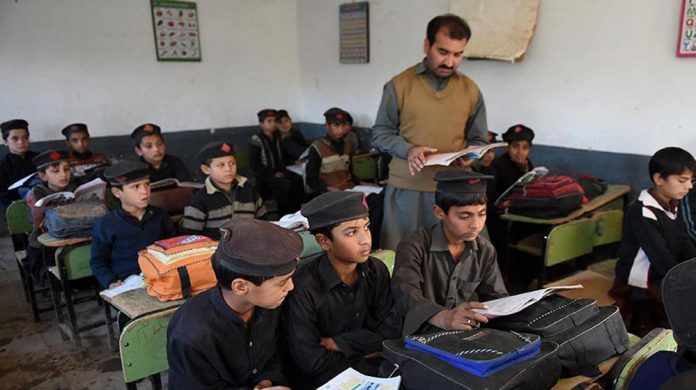 In Khyber Pakhtunkhwa, all educational institutions have been closed since the start of the lockdown in March. During this time, because of the closure, some private schools have laid off their teachers from the jobs as well.

One of these is Haider Hayat who used to be a teacher in one of Swat’s private schools. Today unemployment and lack of jobs has pushed Hayat to work as a street vendor and sells corn and chickpeas to make ends meet.

Hayat said that since the last four months, he and other teachers have been hoping that the government would open private educational institutions just like it has opened other places.

No other source of income has led him to take this path.

“Today I sell corn to the same children, whom I used to teach at school earlier,” says Hayat. “This is all the respect I get from society for being a teacher.”

Hafiz Shabbir Ahmed of Tank has a story similar to Hayat. Ahmed has two Master’s degrees in Urdu Literature and Islamiat. He was also working at a private school and was the sole breadwinner of the household but lost his job due to the situation created by lockdown.

Ahmed had to take debt for the treatment of his parents. To pay off the debts and to earn the livelihood, Ahmed now works at a tea stall.

“Since March, I am jobless. My financial condition has gone from bad to worse. My brother is a paralytic and I don’t have any money for his treatment,” says Ahmed.

Syed Nadeem Shah, Joint Secretary, Private Education Association, Khyber Pakhtunkhwa, said that other sectors have been opened in the country but the government is still reluctant to open private educational institutions. He said that 8,000 private educational institutions have been closed in Khyber Pakhtunkhwa in which around 100,000 teaching and non-teaching staff is employed.

“The government has given a huge relief package to the construction industry but it has completely ignored the teachers, who are the builders of a nation.”

It is important to note that this kind of sacking violates the directions given by the KP Private Schools’ Regulatory Authority which has barred private schools from laying off any employees during the lockdown.

Meanwhile when KP’s Minster for Education, Akbar Ayub was asked about the government’s action against the firing of teachers from private institutions, he said that he was unaware of any such instance and he could only take action if anything would come into his knowledge.