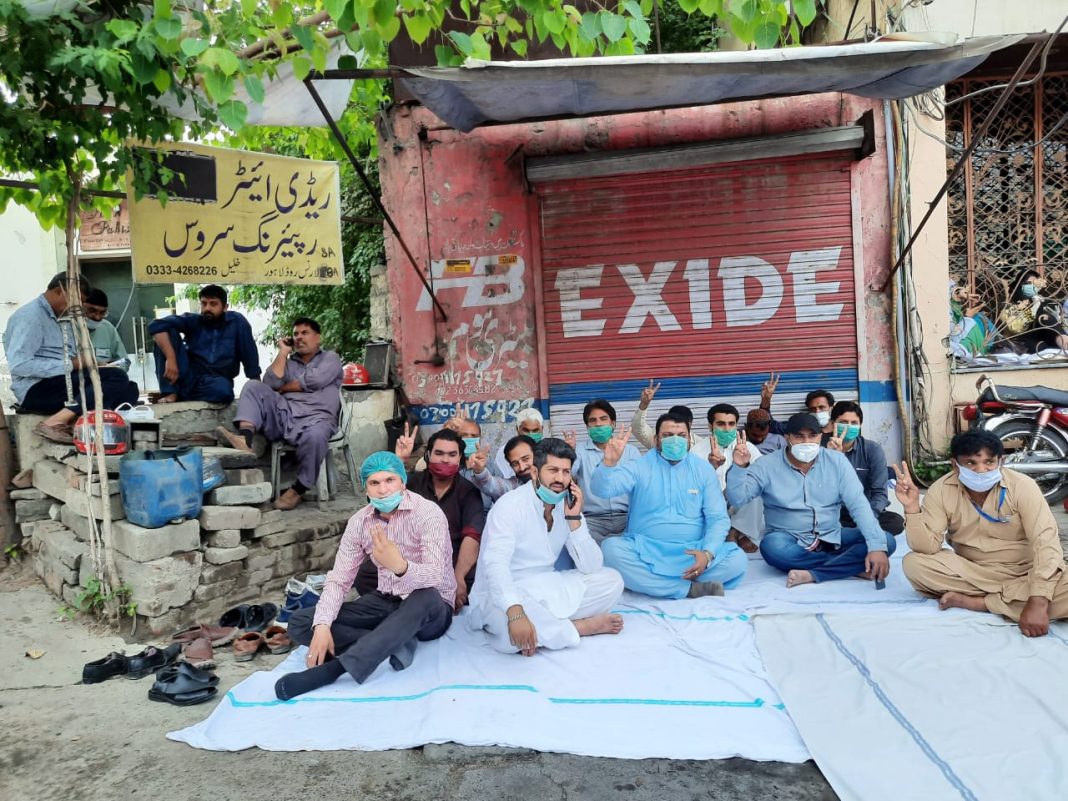 Healthcare workers in Pakistan are getting increasingly restless with their situation: ever since the Coronavirus pandemic hit the country, they have been repeatedly asking for Personal Protection Equipment (PPEs), but to no avail.

On April 7, doctors in Quetta went on a strike after clashes with the police. They too had been asking for PPEs. As a result, dozens were arrested, and several were injured.

On April 16, police baton-charged against the medical personnel during their protest held outside the Health Secretariat.

Now, the Young Doctors’ Association (YDA), and other healthcare professionals have gone on a hunger strike.

Irked by the neglectful attitude of the Government, the President of the YDA Punjab, Dr. Salman Haseeb emphasized that despite their hunger strikes and protest demonstrations, doctors and nurses are still performing their duties, and tending to patients – while also knowing that cases of COVID-19 were rising fast among health professionals.

“The virus is spreading among doctors and nurses at an alarming rate in Punjab,” he said, worried about the situation. “Out of the 25 positive cases in hospitals, it is the paramedics, nurses, and doctors who make up around 47 percent. All these claims by the government about supplying doctors with PPE are false.” And if anyone tries to speak out about the issue he or she ends up being targeted.

“They being locked up in decrepit buildings (for demanding safety equipment) to humiliate and demotivate them,” says Dr. Salman. “And now, the virus is spreading among the families and relatives of health professionals.”

Although negotiations were held between the YDA and the government, Dr. Salman alleged that the government was not serious nor adamant about resolving the issue.

“They respond to everything with a “no”,” he said. “We tell them that we are not receiving PPE, and they say otherwise. We tell them that doctors and nurses are not given adequate provisions in quarantine centers, they claim the opposite; we tell them that the number of daily testing being done in the province is very low – that there are so many cases that are asymptomatic and are mingling with others, spreading the virus further and that we need to scale up our testing capacity, but the Government flat out refused. We asked them to screen doctors, nurses, and paramedics, and they claimed that all health professionals would test positive in that way, so there was no need to screen them.”

President of the Pakistan Medical Association (PMA), Dr. Ashraf Nizami also denounced the lack of PPE and other safety equipment for medical professionals. He stated that it was the duty of hospital administrators to ensure adequate safety for all employees.

“The principal superintendent and other administrative officers should comply with and fulfill, what I believe, are justified demands by medical professionals,” he said. “Security comes first, and if government authorities cannot provide medical professionals with security, then they do not have the right to work there. “The PMA believes that medical professionals should be facilitated according to their satisfaction.”

On the other hand, Punjab Minister for Health Dr. Yasmin Rashid stated that the Punjab government had already disbursed PPEs to all hospitals in the province and that in this regard, the protest had no basis. Doctors around the world contracted the virus, she claimed, despite using PPEs and taking precautionary measures – reasons why there was so much worry amongst health professionals in Punjab.

Dr. Yasmin Rashid added that she did not think the protest was right.

She also said that many medical workers around the world have tested positive for COVID-19 despite using protective kits and this was why doctors were anxious.

Meanwhile, the protest was joined by nurses as well. Sobia Ishaq, spokesperson of the Young Nurses Association (YNA) as well as part of the Grand Health Alliance panel said that the Government has not done an iota to help them out – despite WHO recommendations.

“According to WHO levels 1 and 2, we need gloves and masks, emergency kits, PPE kits, shoes, and goggles,” she said. “At level 3, we need complete isolation. Here we are purchasing surgical masks out of our pocket – what has the government given us?”

She said that the virus was spreading like wildfire among medical personnel.

“We are losing people every day,” she said. “These people must be given the status of a ‘martyr’ (Shaheed),” she said.

She also added that despite the protest they would still be working.

Across the world, governments have been utilizing the full extent of their resources to help the health sector. But in Punjab, as doctors continue their protests concerning lack of safety equipment, dozens of questions and concerns are raised.

Because of the pandemic unraveling too fast, PPEs have been in shortage since the beginning of the outbreak here.

In Pakistan, the Coronavirus came only a few months after the health authorities decided to close the country’s top health professionals’ regulatory body – the Pakistan Medical and Dental Council (PMDC). For the 200,000 practicing doctors, this was already something controversial.

Now, with no PPEs, the brewing resentment between doctors and the Government has come to ahead.

The country is already under-resourced. Hospitals are already suffering from a shortage of equipment and beds, even staff in some cases. This pandemic has more or less leeched the health system dry.

There is also far too little being spent on the health sector in Pakistan. In the GDP, only around 2.9 percent is being spent. It is no surprise then that the doctors, who claim they are severely under stress, have had to take to the streets in a protest.