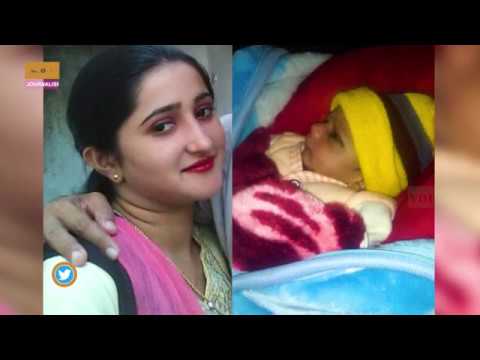 Even days after his death, Sughra Bibi folds and puts away her grandson’s clothes as if he is still alive.

One month old grandson, Hussain Ali and his 21 year old mother Aimen were brutally murdered on February 9, by his own maternal uncles before being buried in the open field.

Hussain was mercilessly bashed against the ground by his uncles, his mother was shot in the face and the belly.

Even then Sughra Bibi believes that both mother and child were alive when they were buried because when their bodies were unearthed, Aimen lay holding her one month old baby close to her chest.

The incident took place in Kot Addu, a subdivision of Muzaffargarh, where Aimen was staying at her in-laws after the birth of her son.

Aimen’s brother-in-law Tariq says that after they abducted her, Aimen’s brothers took her to their farm lands in Alipur, killing them that very night. Mercilessly they were thrown inside a ditch, first the mother then her child.

That was the only funeral they got.

The police say that Aimen’s brothers, Awais and Farooq are both known criminals. They have been charged for grave offences in nearly 10 separate cases.

Even though the FIR against the brothers was lodged for Aimen and Hussain’s abduction, the police is now adding honour killing charges to it.

Voicepk.net spoke to the culprits who are currently in physical remand. They unashamedly admitted murdering Aiman and even Hussain Ali for honour.

Aimen had been fearful for her life ever since she had eloped with Mukhtiar Hussain a year ago – offending her two brothers Awais and Farooq. The two felt that their honour had been defiled and had been promising revenge.

But when Aimen bore a baby boy, she saw a ray of hope. Maybe upon seeing their nephew, her brothers’ hearts would melt. She cherished dreams of mending their relationship and being accepted by them after she ran away and married Mukhtiar Hussain of her own choice. Mukhtiar himself lived in a different city where he worked as a clerk, and so Aimen lived alone.

On the night of February 9th, Aimen’s worst fears were realized when her brothers arrived at her doorstep, strapped with weapons, and abducted her and her child.

Now plagued with misery, Mukhtiar Hussain has resolved to go to any extent to ensure that his wife’s brothers are punished.

In 2016, Pakistan passed a law that made honour-killing non-compoundable offense, however since 2017 there have been a reported 1000 incidents of honour-killing in the country.

2,300 survivors of #DomesticViolence came to the Violence Against Women Center (VAWC) in Multan last year to escape abusive & violent partners.

More on the #16DaysOfActivism here: https://voicepk.net/2022/11/16-days-of-activism-domestic-violence/

Helplines for Women seeking aid and shelter below 👇