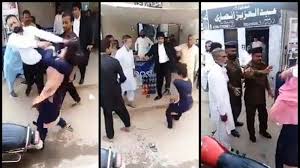 LAHORE: “These people should be taught such a lesson that they never do this to any woman ever again,” says Amrit Shahzadi. Her voice is heavy with emotion, but she does not break down. Shahzadi’s issue surfaced on social media after a video went viral in which she was being ruthlessly beaten up and pushed around outside Shakargarh court.

(What does one do then if a woman starts to irritate?)

Want to join the discussion?
Feel free to contribute!