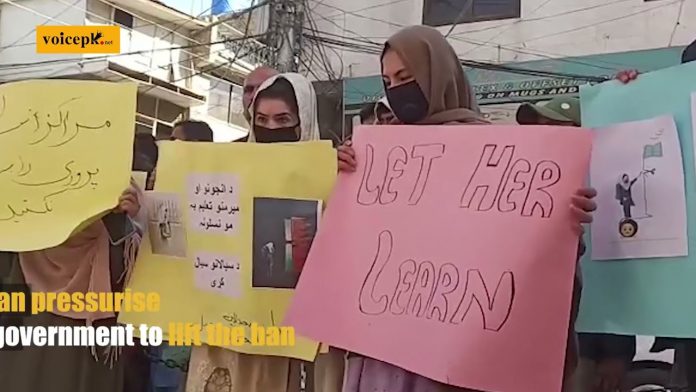 Scores of students and rights activists in Quetta protested against the Afghan-Taliban government’s decision to impose a ban on women’s university education.

The incensed demonstrators marched through the streets chanting slogans in support of Afghan women and their battle against the Taliban’s tyranny.

Several women were part of the protest carrying placards and banners against the ban on women’s education.

The protestors said the Taliban government came to power in the name of Islam but is now “trying to distort the history of Afghanistan”.

The indefinite ban meant only for female students was placed on Dec 20 by the Afghan ministry of higher education.

However, many male students walked off the campus in solidarity of their women classmates.

Internationally, the move has been severely condemned terming it a clear violation of Afghanistan’s obligations under international law.

Afghan women, who have been fighting brutality since the Taliban takeover in August 2021, are continuing to resist these new regressive orders as well.

Now they also have support from male students and over 60 faculty members of universities across the country.

The Taliban-led government in Afghanistan first banned girls from attaining secondary education in September 2021. The situation for Afghan women has been getting worse despite repeated requests from the international community to provide equal opportunities to Afghan women.

The Taliban have also recently resorted to public flogging of women.

On Thursday, December 22, the regime’s representatives publicly whipped 25 people in the Badakhshan province, 20 in Uruzgan, and 10 in Kunduz province, sources privy to the incident told Voicepk.

An eyewitness said that the Taliban whipped 21 men and 4 women on charges of theft, selling drugs, or forging documents in Faizabad. Each person received between 30 to 39 lashes.