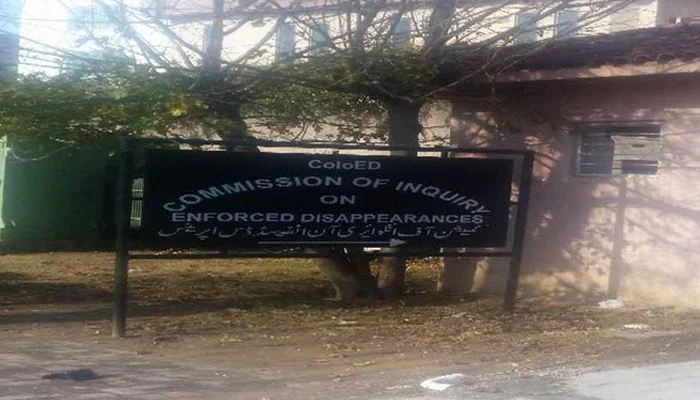 ISLAMABAD: The Islamabad High Court (IHC) has said that despite a decade of its existence, the Commission on Inquiry on Enforced Disappearances (COIED) has not been able to effectively achieve its objective of bringing an end to impunity against ‘enforced disappearances’.

Meanwhile the COIED has witnessed a drop in reported cases of missing persons in the first five months of the year while half of such cases (151) were reported from Balochistan.

The above court observations came in its June 23 order over a petition for the recovery of Zahid Amin, who is missing since 2014. “The COIED was constituted almost a decade ago and its main responsibility was to recommend to the Federal Government proposals to bring an end to the impunity against ‘enforced disappearances,” Chief Justice Athar Minallah wrote in his order.

The chief justice observed that it has become obvious by now that COIED has not been able to effectively achieve its object.

“The Commission is a burden on the exchequer and it ought to justify its continued existence,” Chief Justice Athar Minallah said.

The court reprimanded the COIED for holding public functionaries accountable over non-implementation of the production order. The CJ said It was alarming that the production order in the case was issued by the COIED on September 14, 2020, but despite a lapse of considerable time, no action has been proposed against the public office holders who were responsible for its compliance.

COIED told to submit report over inaction against functionaries

“The COIED is, therefore, directed to submit a report and explain why no action has been taken nor recommendations made to the Federal Government so as to hold those public functionaries accountable who have failed to comply with its production orders.”

The Chief Justice said the court has repeatedly observed that ‘when a citizen is no more traceable and the investigation leads to the conclusion that it is a case of “enforced disappearance”, then it becomes the obligation of the State to effectively trace the missing citizen in order to rebut the presumption of involvement of the State’.

“When there is sufficient evidence to conclude that it is, prima facie, a case of “enforced disappearance”

then it becomes an obligation of the State and all its organs to trace the disappeared citizen. This obligation will remain effective and perpetual till the victim has been traced or credible information gathered through effective investigation regarding his/her fate.”

In addition, the IHC order said, it becomes a constitutional obligation of each organ of the State to hold those public functionaries accountable who are responsible and who have failed in their duty to protect and trace the citizen who has gone missing.

“It has been consistently noted that the proceedings before the COIED are not of adversarial nature. The Commission has to demonstrably show utmost empathy towards the petitioners and all other loved ones of missing citizens. It is the duty of the Commission to reach out to them and through its conduct, assure them that the proceedings are not a mere formality nor an eyewash.”

The IHC directed that the COIED inform the Court why meaningful and effective actions have not been taken nor recommendations made to the Federal Government to proceed against the public functionaries who have failed to comply with the production orders on the next hearing on July 4.

Separately, the COIED has received 315 new cases of missing persons in the first five months of this year while disposing of 341 in the same period.

Interestingly, one-third (126) of the disposed of cases were adjudged as of not being of enforced disappearance. The highest number of deleted cases (83) belonged to Khyber Pakhtunkhwa, followed by 32 cases in Balochistan, six in Sindh, five in Punjab, one in Islamabad Capital Territory.

Out of the 315 news cases, half of such cases (151) were reported from Balochistan. Khyber Pakhtunkhwa reported 102 cases of missing persons. Punjab and Sindh each reported 21 news cases while Islamabad witnessed 10 cases. No new cases of enforced disappearance were reported from Azad Kashmir and Gilgit-Baltistan.

Justice (r) Javed Iqbal has headed the commission since its formation. The Pakistan Tehrik Insaf government gave him a three-year extension as COIED chairman in August 2020. International and national human rights organisations have criticised the COIED for not prosecuting even a single government functionary in cases of enforced disappearance lodged with the commission since its establishment over a decade ago.