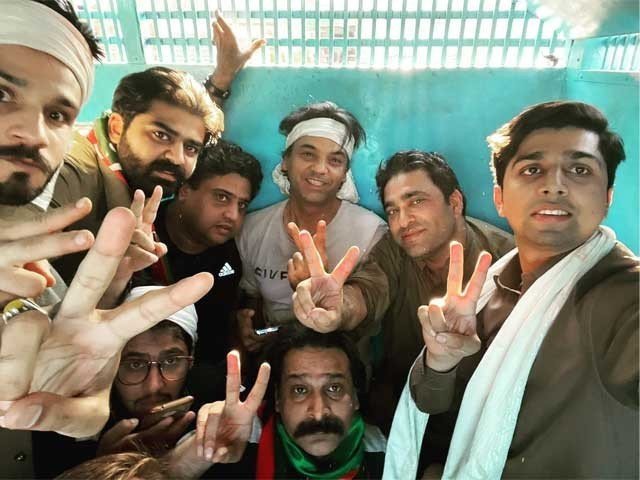 Usman Dar, a leader of Pakistan Tehrik Insaf, was briefly detained along with several party workers in Sialkot over attempting to hold a public gathering on a church school ground despite protests by the local Christian community.

The PTI had announced holding of a public gathering at the CTI ground in Sialkot on May 14 in which former prime minister and party chairman Imran Khan was to deliver a speech as part of his series of public gatherings culminating in the party’s Azadi March to Islamabad. The Christian community opposed the PTI’s decision of holding a public gathering without their permission on the CTI ground, owned by the Presbyterian Church.

In the morning, a contingent of police stopped PTI members from erecting structures in preparation for public gathering in the CTI ground. PTI workers laid before a crane in a bid to stop authorities from removing stage and chairs set up in the disputed ground. Police fired tear gas and baton-charged party activists resisting the move. Usman Dar and several party supporters were detained and taken away in a police van.

According to local reports, Usman Dar and party workers were released in the afternoon following negotiations between the district administration and party officials.

In videos circulated on social media, Usman Dar, a former special assistant to Prime Minister on youth affairs, is seen arguing with Sialkot District Police Officer (DPO) Hasan Iqbal who had come to the venue with the police force. In a video message on his twitter handle, Usman Dar is seen inside a police van along with party workers. He appealed to people and party workers to come out on the streets of city in support of Imran Khan’s arrival there.

In a video, DPO Hasan Iqbal cab be seen telling Usman Dar that the police were not against any political activity, adding that holding a rally was a legal and constitutional right. “But forcibly holding a rally on a property belonging to a minority community without any due process would be inappropriate,” DPO Iqbal said.

DPO Hasan Iqbal told local reporters that the Christian community had filed a petition in the high court against holding of a political gathering on the ground. He said the high court had directed the Sialkot deputy commissioner to listen to both parties and decide accordingly. He said the deputy commissioner had also provided alternatives to the PTI leaders for holding the rally.

In a press conference, PTI Punjab president Shafqat Mahmood said the venue of the public gathering has been changed to the VIP cricket ground, a few kilometres away from the CTI ground.

Responding to police action at CTI ground, Imran Khan said he was undeterred and would proceed to Sialkot to attend the public gathering.

“I will be going to Sialkot today, let there be no doubt. What Imported Govt did in Sialkot against our ldrship & workers is outrageous, but not unexpected. This bunch of criminals out on bail & their convict mafia boss in London have always used fascist tactics against opponents,” the former prime minister said in a thread on twitter.

Imran Khan said they “use and abuse” democracy when in opposition and “totally destroy all democratic norms when in power”, but the people had now risen against them.

“Our govt never stopped any of their jalsas, sit-ins, rallies bec we are committed to democracy. I will be in Sialkot today & I am calling on all our ppl to come out & protest in their areas/cities after Isha prayers against this fascist Imported govt,” Imran Khan said in the thread’s conclusion.

Federal Information Minister Marriyum Aurangzeb said the government had not barred Imran Khan from going to Sialkot as he claimed in his tweet. “The dispute over venue is between the Christian community and the PTI,” she told reporters in a press conference in Islamabad.

“Why was Imran Khan insisting on holding a rally in the same place by spreading religious hatred,” she asked, adding that why the PTI rejected the proposal to hold the public meeting at other proposed venues. She said that this was clear manifestation that Imran only wanted to create a scene and stage a political drama.

Dr Majeed Abel said the campus was used for holding an annual event of the mission. “The campus cannot be used for any other purposes,” the pastor said. He said as soon as they received information that the PTI had started political activities at the campus, “we approached the Sialkot DC to overcome this crisis”.

“We are working on it and also approaching other forums,” he said, expressing the hope that the federal, provincial and local governments would deliver justice and provide assistance in not letting the school be used for political purposes.

However, Shanila Ruth, a PTI MNA on the minority reserved seat, said the Shahbaz Sharif government was exploiting the peaceful Christian community, claiming that ordinary Christians did not object to holding of a political public gathering there. She said certain Christian leaders had allowed PML-N leader Maryam Nawaz to make political speeches from the pulpit of churches previously.