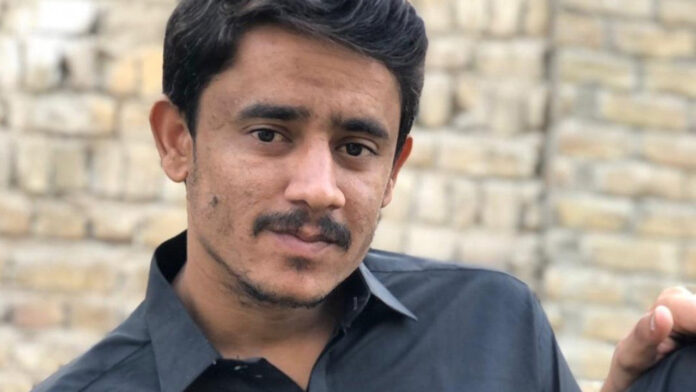 The Lahore chapter of the Baloch Students Council (BSC) has accused security forces of picking up a Baloch student, Bebgar Imdad, from the Punjab University (PU) hostels in the early morning of April 27. In a video that went viral on social media, plainclothes men can be seen dragging Imdad out of the hostel premises and shoving him into a white Toyota Hilux Vigo.

According to a statement by the BSC, Imad is a student of National University of Modern Languages (NUML) Islamabad and was visiting his cousin at PU to spend the Eid holidays. The Council has further alleged that the PU’s Chief Security Officer was part of the raiding party.

Following Imdad’s arrest, the BSC staged a staged a sit-in outside the university’s Vice Chancellor’s office, calling for his immediate release. The council claims that no first-information report (FIR) was lodged against him, and his whereabouts are currently unknown.

Condemning the young student’s detention, rights activists believe Imdad was arrested in light of yesterday’s terrorist incident at the Karachi University, in which three Chinese teachers and their Pakistani driver were killed in a suicide bomb blast by a female militant of the Balochistan Liberation Army (BLA).

However, Baloch students have complained of harassment at campuses across Pakistan for years.

Similarly, in February this year, security forces picked up Baloch students in Lahore immediately following a terrorist bombing incident at Anarkali Bazar. The attack was also claimed by a Baloch separatist organization.

Hafeez Baloch, a student of the Quaid-e-Azam University Islamabad, was also picked up by security forces from his hometown Khuzdar in February. He was booked for terrorism after weeks of detention without an FIR.

The BSC says that harassment on campuses and racial profiling on the pretext of security is part of a new, unwritten state policy to deprive Baloch students of quality education.

Pakistan's media watchdog #PEMRA banned all TV coverage of the recent rape incident at #F9Park in Islamabad after some media channels, reportedly, revealed the victim's identity.