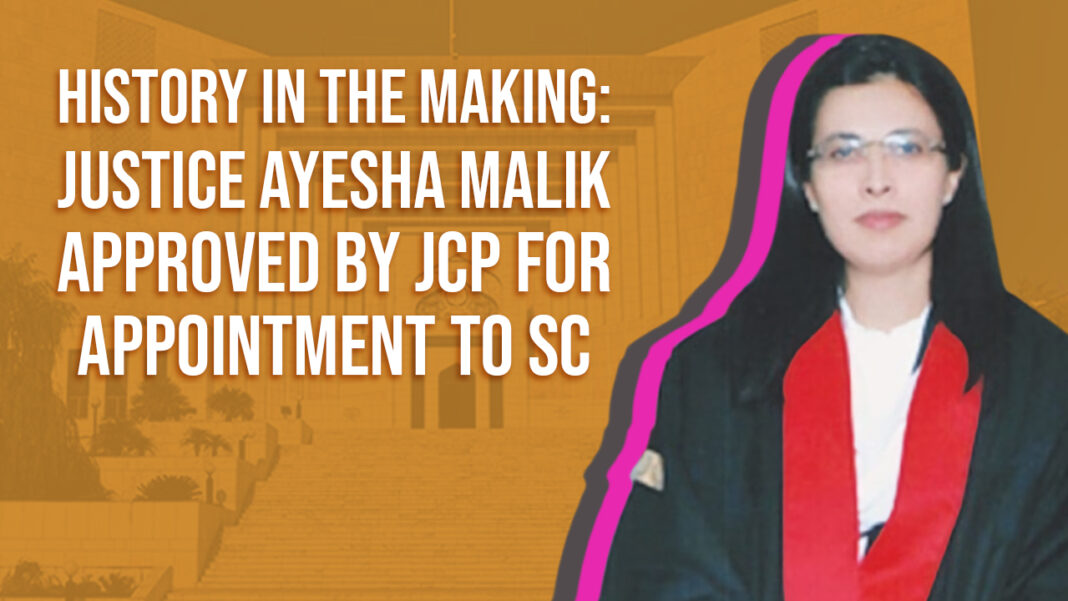 The Judicial Commission of Pakistan (JCP) has made history by approving the appointment of Justice Ayesha Malik as the first female judge of the apex court, despite stiff opposition from lawyers bodies. She was fourth in the seniority list in the Lahore High Court (LHC).

Lawyers on Thursday observed a nationwide strike of court proceedings on the call of the Pakistan Bar Council (PBC) and the Supreme Court Bar Association of Pakistan (SCBAP). The apex body of the lawyers was of the view that seniority principle should be adhered to strictly while elevating judges to the Supreme Court.

Now, the name of Justice Malik will be forwarded to an eight-member Parliamentary Committee on Appointment of Judges for the confirmation. The Committee can rescind the confirmation of the judge by a three-fourths majority of its total members.

Justice Malik, 55, will serve as a Supreme Court judge till June 02, 2031, and is scheduled to serve as the Chief Justice of the apex court after the retirement of Justice Yahya Afridi in January 2030.

This was the second time that CJP Gulzar Ahmed had nominated Justice Malik’s name for appointment as an apex court judge. But the his first bid to bring her in the Supreme Court remained futile as the JCP did not approve her name in its September 9, 2021 meeting. The vote for her confirmation was tied with four members of the JCP voting in her favor while the remaining four voted against. Justice Qazi Faez Esa did not attend the meeting as he was not in the country then.

How consensus evolved this time around

There has been one change in the formation of the JCP since its last meeting: Retired Justice Dost Muhammad’s tenure as a member was completed on October 10, 2021, and he was replaced by Retired Justice Sarmad Jalal Osmany. In today’s meeting, the new member agreed with the CJP’s nomination and voted in favour of Justice Malik’s appointment.

Who is Justice Ayesha Malik?

According to the LHC’s website, she completed her basic education in Paris and New York, and did her Senior Cambridge from the Karachi Grammar School, Karachi. She then did her A’ Level from Francis Holland School for Girls in London. She completed her B.Com from the Government College of Commerce & Economics, Karachi, and studied law at Pakistan College of Law, Lahore. She went on to do her LL.M from Harvard Law School, Cambridge, Massachusetts, U.S.A. where she was named a London H. Gammon Fellow 1998-1999 for outstanding merit.

She was appointed as an additional judge of the LHC on March 27, 2012, and was confirmed as a permanent judge in 2013.

As a judge, she had adjudicated many important cases pertaining to civil liberties, women’s rights and constitutional matters.

In 2016, Justice Malik stopped the transfer of two sugar mills owned by the families of then Prime Minister Nawaz Sharif and Chief Minister of Punjab Shahbaz Sharif.

In 2017, Justice Malik ordered the Election Commission of Pakistan (ECP) to ensure that all mandatory information and declaration such as Educational qualifications, current occupation, and Dual nationality, NTN number etc. of the candidates are collected. However, the Supreme Court suspended that order.

Justice Malik through her judgments tried to protect the weaker segments of the society, especially women, from the patriarchal legislation and practices.

In January 2021, She abolished the two finger test (TFT) for examination of sexual assault survivors by declaring it illegal through a historic judgment. She also declared that the TFT violates the dignity of the female victim and was contradictory to Articles 9 and Article 14 of the Constitution.

All major lawyers’ bodies including the PBC and SCBAP vehemently opposed the appointment of Justice Malik as a Supreme Court judge, terming it against the principal of seniority as laid down by the apex court in the Al-Jehad Trust case in 1996.

Senior lawyer and former president of the SCBAP Hamid Khan argued that non-adherence to the seniority principle always had negative consequences for country’s democracy. He said that out-of-turn elevations are sometimes misused to manage and incentivise high court judges in order to get favourable judgments from them.

However, women lawyers’ collective Women in Law (WIL) Initiative Pakistan has strongly opposed the demand for strict adherence to the seniority principle in judicial appointments.

The WIL urged the legal fraternity, Bar Councils, Bar Associations and other stakeholders to withdraw the demand for adhering to the seniority principle and to refrain from taking any measures that would render current judicial nominations contentious.

The WIL compiled a list of those judges who have been appointed as Supreme Court judges in violation of the seniority principle. According to the list, a total of 41 judges have been appointed to SC bypassing the seniority principle since 1947 till date and out of these 41 jurists, 20 were elevated to the apex court after the Al Jehad Trust case judgement.

Out of the last seven appointments of judges in the Supreme Court, the rule of seniority was overlooked five times and junior judges were appointed as a top court judges. More recently, Justice Muhammad Ali Mazhar, who was fifth in seniority, was elevated as Supreme Court judge.