“We came to know of our father’s death in Indian jail through a police officer who came to verify his nationality to our house last month,” said Jafar Alam, eldest son of 45-year-old Pakistani fisherman Ameer Hamza who was imprisoned in India for violation of territorial waters four years ago.

Human rights activists pointed out that a joint judicial committee on prisoners between India and Pakistan has been dormant for about 8 years, adding that this has added to the misery and plight of hapless fishermen and civilians of both countries imprisoned in each other’s jails. 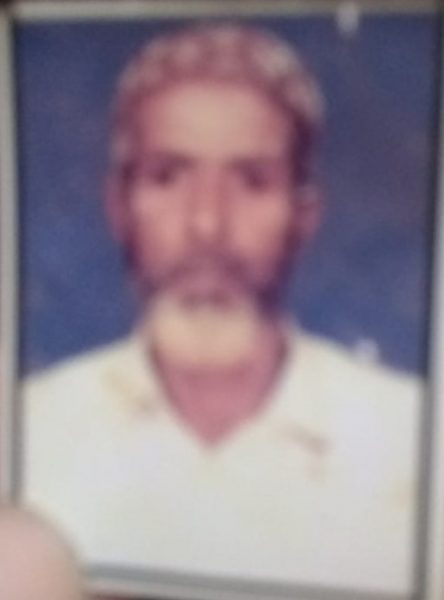 Ameer Hamza, son of Safar Ahmed, was among seven Pakistani fishermen on board the fishing boat Al-Najam when they were arrested by Indian Navy on charges on of violation of Indian maritime boundary in November 2017, Jafar Alam, the eldest of Hamza’s nine children, told Voicepk.net on the phone from his home in Karachi.

“We were told about his death when a police official came to their neighbourhood with a picture of their father,” he said, adding that the relatives recognized that the picture was of Ameer Hamza and the police official told them that he had passed away in an Indian jail.

The Indian government had intimated Pakistan about his death last month. The Sindh police confirmed Hamza’s nationality after a ground verification visit to his home at Ali Akbar Shah Goth in Korangi locality. Jafar Alam said none of his father’s companions had returned home or had any word of their wellbeing in India.

Alam said that his family knew nothing about the whereabouts of their father all these years. “We were told about his death when a police official came to their neighbourhood with a picture of their father,” he said, adding that the relatives recognized that the picture was of Ameer Hamza and the police official told them that he had passed away in an Indian jail.

Alam said his mother had passed away eight years ago and their 45-year-old father was the sole breadwinner of the family. The family was living a hand-to-mouth existence since their father was arrested by Indian security forces, he added.

Human rights activist Saeed Baloch said imprisoned fishermen are being treated as prisoners of war by both of the countries. “The high commissions in both countries are not informed of the arrest of the Indian or Pakistani fishermen so that consular access can be requested,” he said.

According to the Fishermen Cooperative Society, Hamza succumbed to constant ill-treatment by the Indian jail staff. In March, an Indian fisherman Ramesh Taba died in Karachi prison. He had completed his prison sentence in Pakistan in July 2019 yet he was not released and repatriated from Pakistan and died as a detainee, according to Jatin Desai, the former general secretary of the Indian chapter of Pakistan-India People’s Forum for Peace and Democracy (PIPFPD).

The India-Pakistan Joint Judicial Committee on Prisoners, formed in 2007 for the expeditious release of prisoners of the respective countries in each other’s jails, is dormant since its last meeting in 2013. The 8-member committee consists of four retired judges from each country.

“Pakistan-India Judicial Committee on Prisoners is currently dormant,” Foreign Office Spokesperson Asim Iftikhar said in his written response to the question of whether Pakistan had notified its members of the joint judicial committee.

The Indian government has notified its members but Pakistan has not given names of its members, according to Muhammad Tahseen, convener of the Pakistani chapter of PIPFPD.

In July, the Indian Foreign Affairs Ministry proposed to organise an early visit of the Indian members of the Joint Judicial Committee to Pakistan.

“The Indian members of the joint judicial committee used to visit jails in Pakistan and vice versa Pakistani members visited jails in India to inquire about prisoners from their respective countries,” he explained. “The members used to check whether the nationality of the prisoners have been confirmed and if it has been confirmed whether consular access has been given or not,” Tahseen added.

Similarly, the joint judicial committee members also used to monitor delay in repatriation of prisoners who had completed their sentence as well as an intimation to their families, Tahseen said.

Baloch, who is also general secretary of the union of the Fishermen Cooperative Society, said the visits of the joint judicial committee helped families of imprisoned fishermen stay abreast of their loved ones. During jail visits, committee members used to meet imprisoned fishermen and inquire from officials about their term of sentence and consular visits, he added. “Since the lapse of the joint judicial committee, condition of Indian and Pakistan prisoners has worsened to an unspeakable level,” he said.

Talking about Ameer Hamza’s companions, Baloch said the families of the six other fishermen arrested along with Ameer Hamza have yet received no word from the federal government about their whereabouts in India.

PIPFPD convener Muhammad Tahseen called on Pakistan and India to immediately revive Pakistan-India Judicial Committee on Prisoners on humanitarian grounds in order to provide relief to scores of elderly, women and children languishing in each other’s jails.

Mirwais Nabi always dreamt of becoming #Afghanistan’s pop music sensation but his dreams shattered after the #Taliban took over. His office was attacked and all musicals instruments were vandalized leaving him no choice but to fled his homeland

Although Punjab Chief Minister Usman Buzdar recently announced a Rs 5.5 billion package for prisons in the province a proposed revamp of the 127-year-old jail laws is still pending cabinet’s approval for over 11 months.

On October 10th a Mortar bomb attack in Kech, Balochistan killed two children and wounded another. Family members of the deceased have been demonstrating outside the Governor House Balochistan to demand swift justice for their children

A sessions court in Islamabad has indicted 12 people, including #ZahirJaffer, the main accused in the #NoorMuqadam murder case. All the accused inside the court pleaded not guilty.