“When Madeeha Gauhar was baton-charged and incarcerated in jail for two weeks, it was because she had participated in the historical protest by women activists in Lahore during the martial law rule of General Zia-ul-Haq,” says her husband, and famous playwright Shahid Nadeem. The pair complemented each other, both being icons of the stage, and worked together to create the internationally well known Ajoka theatre – a platform for not only providing entertainment but constantly battle against the clampdown on freedom of speech and expression.

Shahid Nadeem sat down recently with Voicepk.net to remember his late wife, a fiery presence on the scene of resistance against the status quo and human rights violations. Like so many other women who are today known to be the pioneers of the women’s rights activism in Pakistan, Madeeha too was among the founders of the Women’s Action Forum in 1983, ceaselessly campaigning for the repeal of discriminatory laws against women and religious minorities. But it was not as if Gauhar was shielded from the repercussions.

“Madeeha was sacked from her government job from the Samnabad Government College for Women, as an English lecturer, after she took part in the protest of 1983,” says Nadeem. His eyes twinkle with fondness and admiration as he remembers the forceful personality. He shares a picture of the protest of February 12, 1983, which shows an undeterred Madeeha Gauhar fending off the batons of the charging policemen. The 1983 protest was iconic – along with Madeeha, poet Habib Jalib, the late Asma Jahangir, I. A Rehman and Tahira Mazhar Ali were just some of the eminent people who were jailed, adds Nadeem.

And just like all these fighters, Madeeha was a force to be dealt with. She just never gave in to State policies that allowed for any kind of restrictions.

“Madeeha also quit working for the state-run Pakistan Television (PTV) in their dramas as a leading actress, because of repressive and extremist policies towards women imposed by the military regime as part of its Islamisation process,” says the playwright. He says the struggle of women activists was later turned into a play Neelay Hath on PTV, written by Shahid Nadeem himself.

Restrictions imposed on female news anchors and actresses were ludicrous in those days. There were strict rules of ‘hijab’ or head covering imposed upon actresses, says Shahid Nadeem and goes on to reminisce a bizarre and ridiculous situation.

“I still remember Madeeha was playing the character of the heroine Sohni in the historical romance ‘Sohni Mahiwal‘ on PTV,” says Nadeem. “There was a scene where Sohni jumps into the river to meet her lover, but the PTV authorities insisted that Madeeha wear a dupatta on her head when they shot her coming out of the river!” Such were the rules imposed.

On the other hand, Madeeha’s own dramas always spoke against rigidity and oppression of any kind. If Asma Jahangir fought oppression through her profession as a lawyer, Madeeha Gauhar fought against it through her art.

Gauhar was born in Karachi in 1956 to Khadija Gauhar, a journalist and novelist with progressive leanings, and Ali Gauhar, an army officer from Khyber Pakhtunkhwa. She did her schooling at the Convent of Jesus and Mary in Lahore, and her graduation from the Kinnaird College for Women.

“Interestingly”, says Shahid Nadeem, “Madeeha had her brush with censorship while at college, when the performance of her play, Jungle Da Rakha – which was about the fall of Dhaka – was not allowed to be played by the GC Dramatics Club.”

Madeeha went to England to complete another post-graduation in Theatre Sciences from the University College of London. Shahid Nadeem says she did her research thesis on the Indian theatre scene, mostly because there was no notable serious theatre being done in Pakistan at that time. She also directed Badal Sircar’s ‘Stale News‘ at the drama department of the Royal Holloway College in the United Kingdom. Like many others of Sircar’s plays, Stale News reflected the face of oppression.

in 1983, Madeeha not only made her mark as a social activist as she protested alongside other women, against the Zia ul Haq’s Law of Evidence, but she also helped form the Ajoka Theatre, which in Punjabi means ‘theatre of today’.

Shahid Nadeem smiles as he remembers how Madeeha staged Ajoka’s first play on the lawn of her mother’s home in Lahore. The theatre group committed to performing socially meaningful theatre, which pioneered the movement of alternative productions in Pakistan.

Ajoka Theatre elaborates on the oral tradition of Bandh and Nautanki. As a director, Madeeha did not restrict herself to conventional classical Western theatre techniques, in fact, she incorporated authentic local elements with contemporary sentiments.

Although she was not a native speaker of Punjabi, Madeeha Gauhar still decided to do plays in the vernacular languages – in Punjabi and Urdu – to connect with the common people of the land, says Nadeem. “She believed that actors perform their best in their own native languages,” he says. “Ajoka Theatre has about 50 original plays in Punjabi and Urdu to its credit.” 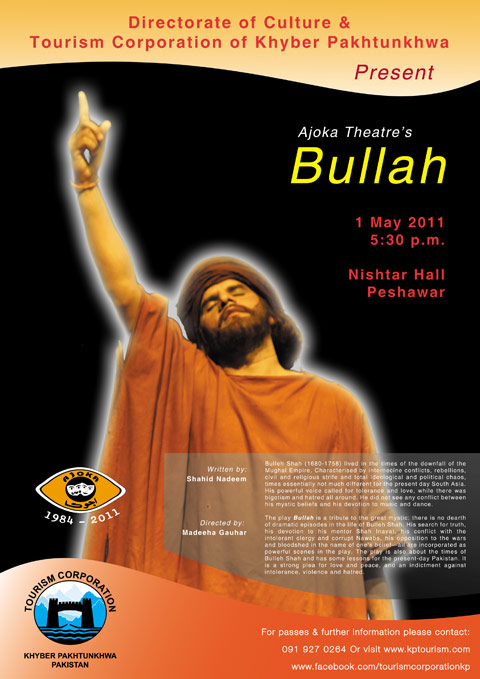 Among the dozens of plays Gauhar directed for Ajoka Theatre, some of the names include Badal Sircar’s Jaloos, adaptations of Brecht’s plays including The Caucasian Chalk Circle, The Good Person of Sezuan and The Three-penny Opera. One of Brecht’s plays The ResistibleRise of Arturo Ui, was adapted as Bala King.

Ajoka Theatre became the first Pakistani group to perform in Indian Punjab state and Indian-occupied Jammu and Kashmir state, Nadeem says. In an interview, Madiha Gauhar had said that the Ajoka troupe had performed in places from Kashmir to Kanya Kumari, meaning entirely all states of India –  an achievement unparalleled given the hostility between the two nuclear-armed neighbours.

Nadeem says Gauhar became an early member of the Pakistan and India People’s Forum for Peace Initiative launched by human rights icons Asma Jahangir and IA Rehman. Through her theatre group, she fostered greater contact between artists of both nations.

“Ajoka and Madeeha Gauhar both garnered great appreciation and love from the Indian audience of all hues,” says Shahid Nadeem. “Even in times of heightened tensions between the two countries, New Delhi allowed the Ajoka troupe to perform in India. Even leaders from the ruling Bhartiya Janta Party came to watch performances of Ajoka Theatre plays in India,” he says.

Once some BJP activists began to protest outside the playhouse in black masks. They demanded that Madeeha carry a ‘memorandum back to Pakistan’, which Madeeha calmly denied. Instead, she insisted they watch her play. Ironically, the activists were enthralled by her production and actually praised her for helping to make peace between the two countries.

In another incident, activists from Shiv Sena had also refused to let the play Manto be staged but Madeeha received support from the rest of the theatre community who ensured that it did and there was even a second screening at the JNU University the same night.

Before she died, Madeeha Gauhar went with the Ajoka troupe to perform three plays as part of the Hamsaya Festival in Indian Punjab in 2017. Nadeem says plays from the Ajoka Theatre have been translated into Indian languages too, adding that the Indian Academy of Letters has included a play he wrote for Ajoka in the anthology of Punjabi language plays. The plays from Ajoka Theatre call for a just, humane, secular, and equal society.

Shahid Nadeem says a host of Indian artists participated in the memorial organised by Ajoka Theatre to pay tribute to the late icon in Lahore in 2018.

Shahid Nadeem says Madeeha Gauhar felt strongly towards issues of women rights, adding that the controversial ‘Burqavaganza’ play in 2010 was intended to highlight the increasing attempts towards enforcing the veil in the country. He says initially the play was well received and even notables like late Justice Javed Iqbal, son of Allama Iqbal, watched the play at the Al Hamra auditorium in Lahore.

But soon enough the right-wing Jamaat-e-Islami party started agitating against the play, forcing the government to impose a ban.

“The play became such an issue, that it was even brought up in parliament and a government official told the Senate committee that it was banned as it had hurt the sentiments of a neighbourly country, Afghanistan, where the Burqa was a major part of female attire,” Nadeem recalls.

But Madeeha never backed down. In defiance of the ban, Madeeha sought the help of the Human Rights Commission of Pakistan (HRCP) which allowed the staging of her play in its auditorium.

The playwright says the play was later renamed Hasina Ki Kahani, Khubro Ki Zabani, and managed to perform in other parts of the country.

When asked how Madeeha Gauhar would have reacted to the controversy surrounding the Aurat March, Shahid Nadeem says she would have been on the streets with the participants of the Aurat March to show her support.

“She might even have produced a play about Aurat March in response to the controversy,” he says. Nadeem says Madeeha had produced a play on the assassinated Governor of Punjab, Salman Taseer, in Al Hamra even as supporters of the assassin were holding protests and demonstrations in the city.

“Even today Ajoka Theatre is striving to continue Madeeha’s legacy. The COVID pandemic and renewed hostilities between India and Pakistan had stopped cross-border cultural activities,” Nadeem says. “But artists on both sides are in touch with one another online. Hopefully, as the COVID situation improves in both countries, one will see a revival of the exchange of cultural troupe between the countries.”

Among the many recognitions, that Madeeha Gauhar received, were the Prince Claus Award in the Netherlands in 2006, the International Theatre Pasta Award in 2007, and she received Tamgha-i-Imtiaz in recognition of services to Pakistani theatre in 2003. She was also bestowed with the Fatima Jinnah Award by the Government of Punjab in 2014.

With Madeeha’s passing on April 25, 2018, Pakistan became bereft of yet another driving force. Madeeha Gauhar not only spoke out boldly, but she also created a platform for those who sought to hear the things she said, bringing together those who could be encouraged to carry on the battle forward.