Ahead of its planned long march this month, the Pakistan Federal Union of Journalists (PFUJ) has submitted a 19-point Charter of Demands to the Prime Minister over resolution of their issues amidst a media crisis in the country.

In a statement on 31st March, the PFUJ said the Charter of Demands urges the federal and provincial governments to immediately take concrete measures for the revival of media industry and safeguarding the rights of working journalists and media workers, who are faced with retrenchments, layoffs, financial hardships and threats to life and property, besides becoming the victims of unchecked Coronavirus pandemic for being the frontline workers.

Speaking to Voicepk.net Nasir Zaidi, Secretary General of the PFUJ, said the charter lists demands in three broad categories relating to the financial crisis in the media industry; issues of media freedom and safety of journalists, and difficulties faced in the face of the COVID pandemic in the country. “The Charter of Demands is addressed to Prime Minister Imran Khan,” he specified. 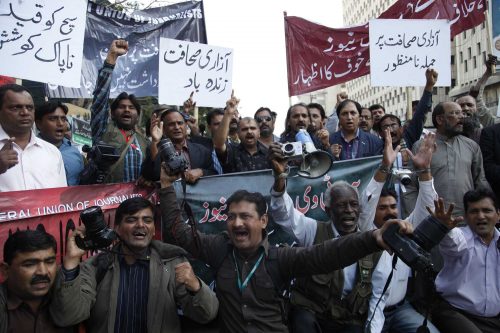 Demands to deal with financial crisis

1.Federal Government should immediately call /arrange a meeting of all the stakeholders of media industry (owners, Representatives of PFUJ and Ministry of Information and Broadcasting and representatives of Information Departments of all the provinces including AJK and GB) to chalk out a comprehensive consensus plan to solve the financial crisis in the media industry.

2. Federal Government should play its role in safeguarding jobs of Journalists and media workers and direct the owners of all the media houses and newspapers to immediately stop the process of retrenchments and re-employ/restore the services of those journalists and media workers who were fired/terminated from the jobs for the last few years and in case of failure government advertisement should immediately be stopped.

3. Wage Award for the Newspaper employees announced in January 2019 be implemented without any further delay. The government should immediately create effective mechanisms for the implementation of this award, including making government advertisements conditional with its implementation.

4. A service structure similar to the wage award for print media, should also be devised for broadcast and the digital media and implemented across all media categories.

7. Soft small loans and life insurance packages should also be designed and health card schemes and quotas in the Prime Minister Housing Scheme for journalists and media workers should also be announced.

8. The labor departments in all regions should be tasked by the government, to conduct surveys in media houses, assessing the working conditions and compliance with all labour laws. Media houses should additionally be assessed for measures taken for job, life, health security of journalists/media workers.

9. Federal and Provincial Governments should devise a balanced and merit based comprehensive advertisement policy

10. PFUJ demands for the appointment of more judges in the Implementation Tribunal for Newspapers Employees (ITNE), in all the provincial headquarters for speedy disposal of cases of newspaper employees.

11. PFUJ demands that all draconian laws designed and used for gagging the media and intimidating the journalists be repealed or amended. We demand that the government revisit these rules and regulations and laws, including Article 19 and 19-A, which should be revisited by the parliament immediately to further strengthen the freedom of expression and right of access to information.

12. Government should desist from misusing PEMRA law and imposition of censorship on the media.

13. The government should immediately withdraw the Removal and Blocking of Unlawful Online Content Rules 2020, which are clearly designed to control digital / and social media and make amendments in Prevention of Electronic Crime Act (PECA) 2016 in consultation with the stakeholders including PFUJ.

14. Federal and Provincial governments are called upon to direct police and law enforcing agencies to make foolproof arrangements for providing safety and security to life and property of journalists and media workers and immediate arrest of killers of Journalists and media workers for the last 20 years in the country. A compensation of Rs 2 million (per family) for those journalists/media workers who were murdered, should also be announced besides free education and health facilities to children and families. Moreover, the governments should also identify and arrest all those state and non-state actors who are involved in the kidnapping of the journalists in the country as without the arrest of the criminals, whether state actors or non-state actors, the government cannot claim that its hands are clean.

15. The government should direct the police and other law enforcing agencies to stop registering treason cases and under Anti-Terrorist Act on false allegations and take action against the responsible ones.

16. Sindh government should reopen murder cases of journalists Daniel Pearl and Wali Babar for speedy justice to bereaved families besides stern action against the responsible police officers for their negligence in leaving loopholes in investigation/prosecution.

17. All the provincial governments should take the measures for establishing press clubs at district headquarters’ level.

18. Given the fact that media workers have had to constantly put themselves at risk for the public, to bring news and reports from the field, they should be recognised as frontline workers and given priority status for immediate access to the coronavirus vaccine.