As the world struggles to give a unified response to the rapidly escalating crisis in Myanmar, disturbing images of the brutal crackdown against pro-democracy protestors have jolted the international community.

The most recent incident that shocked the global community was on Tuesday morning, when a video of a nun kneeling in front of armed police personnel, begging them not to shoot protestors, went viral on Twitter. Despite their pleading, however, there was shooting and the nun says she saw a youth being killed in front of her own eyes.

The global community has responded only by imposing limited sanctions on high-ranking military officials involved in the coup, but these efforts have done little in persuading the ruling military junta from relinquishing power or even softening its intense, oft-deadly, crackdown on pro-democracy citizens.

The police, paramilitary and armed forces have used batons, tear gas, rubber bullets, and even live ammunition to disperse rallying protestors. International news outlets such as Al-Jazeera have reported that the total death toll is believed to be over 50.

Despite the brutal repression mass, public protests are only growing in size. The current wave of protests has been compared to the Saffron revolution of 2007 when Buddhist monks led a popular rebellion against the ruling junta, which resulted in the partial restoration of democracy after almost half a century of military rule.

Myanmar, previously known as Burma, much like the rest of the region gained its independence as a consequence of the Second World War. But decades of foreign rule, first at the hands of the British and then the Japanese, had ethnic flashpoints emerge in a country with over 130 officially recognized ethnicities.

These flashpoints eventually boiled over into full-fledged rebellions by various minority ethnicities occupying the peripheries of the country, plunging the new-born country into political chaos.

In the midst of seemingly perpetual political instability, Myanmar’s military, called the Tatmadaw, positioned itself as the sole force for stability and guarantor of the supremacy of the majority Burmese population.

The first coup came in 1962 when the elected social-democratic government was overthrown by the military before it imposed martial law in the land. The martial law regime later transformed itself into a single-party authoritarian socialist set-up resulting in the imposition of punishing sanctions from the international community.

The first coup helped formalize the position of the military in the political framework of the country. For the next 49 years, Myanmar was ruled either directly by the military or through hybrid regimes largely propped up by the army until the Saffron revolution which catapulted Aung Sang Su Ki’s National League for Democracy (NLD) into office, heralding the birth of democracy in the country.

The country’s democratic experiment did little to challenge the over-arching might of the Tatmadaw which enjoyed formal political powers guaranteed under the 2008 constitution drafted by the Junta itself. According to the constitution, the military enjoys a 25 percent representation in the parliament and has retained control over the interior and defense ministries.

In addition to wielding political power, the military also retains control over large swathes of the economy through two conglomerates and is an informal partner in almost all large-scale investments pouring into the country.

The February 1 coup came in the backdrop of the 2020 general elections in which Aung Sang Su Ki’s NLD won almost 80 percent of the popular vote. However, the ruling junta claimed that there was widespread voter fraud in elections which forced the generals to step in to restore “true and disciplined democracy” in the country.

The leader of the coup General Min Aung Hlaing has declared that the military will hold ‘free and fair elections after a year of emergency and will let the democratic process resume. But this is a claim which has been ridiculed by rights activists across the region.

Though the exact reasons behind the coup remain unclear, reputed experts have speculated that the rising popularity of the NLD party has threatened the hegemony of the military, and it has chosen to respond by preserving its political and economic interests.

A Revolt for Democracy

Despite the brutal crackdown, the citizens of Myanmar have not allowed themselves to be pushed back. Instead, they have mounted a fiery response to the assault on their basic democratic rights.

Initial protests began with the simple act of banging pots and honking horns as an act of social solidarity. Today they have blown into a mass rebellion for democracy. 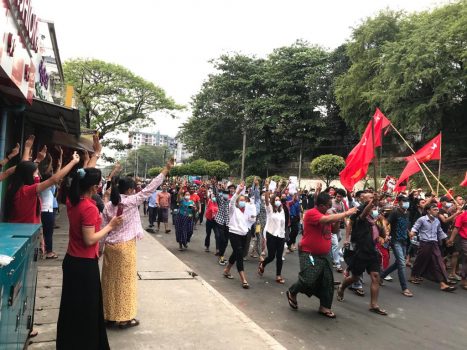 The first physical protests for democracy erupted on the streets of Myanmar on February 6, only around a week after the coup. Even though it was a small procession the core demands resonated with a vast majority of the young population of the country.

HC* (name changed for security reasons), a journalist based in Yangon, where this protest took place has described the situation as ‘extremely unpredictable’ and despite the public gathering their courage to protest, she says there is also a constant atmosphere of fear. As with every such dictatorship, censorship has taken place too.

“All those from the journalist community are being really careful,” she told Voicepk.net, in an exclusive interview. “Some of them are not staying at home, they are seeking shelter in other places so they are not tracked down. Some are getting away with this dodging, while others are being easily nabbed.”

HC herself says she is living in fear and believes anything could happen at any time.

“Recently, up to 28 journalists, I believe, have been arrested, while five media organizations’ licenses have been revoked, and three media outlets have been raided. Properties are being ransacked. We have no idea about what will happen next. They can come to get us any time…we have no idea.”

All the journalists who have been reporting from the ground, now do not dare to go out.

“The situation is really bad, and we can be arrested any time.”

HC describes that as people are trying to push back, the military has not bothered to soften its stance even a little. “What is happening now, is that turmoil is growing, not just in Yangon, but in all other cities – it’s catching,” she says. “Security forces are opening fire, and there is tear gas shelling. It can also happen anywhere.”

The worst situation is being faced by those who are vulnerable, such as the elderly and the children.

“The shops, supermarkets, and malls are all closed,” she says. “Only the small stores are open but within a certain time frame. The main market however is all closed down. People have to really rush to buy within that certain time.”

Probably West Myanmar is a relatively safer region, spared by the military, as those who live there have not yet joined the protests.

HC describes that hundreds of people have been arrested for their pro-democratic stance, taken to prison and tortured, even killed – all on a daily basis.

­­­The Civil disobedience began after teachers and doctors from government enterprises refused to go to work under the military regime. Within days the youth also joined and the whole country particularly the urban youth was up in arms. Over 50 people have died so far in the ensuing violence but protestors maintain that they are “willing to die for democracy.”

Now even students and home-makers have joined the pushback. As for Su Kyi, she has not been seen in public since February when they held her in detention.

There are close to a million street children in cities across Punjab, says Sarah Ahmad, chairperson of the Punjab Child Protection and Welfare Bureau, announcing a renewed push against child beggary during Ramzan.

The Chinese pharma following the US Dept of Health & Human Services’ recommendations to hold back J&J vaccines, which use the same tech as CanSinoBIO, after six women under 50 developed rare blood clots