Conflict-hit parts of Balochistan have much lower coverage for healthcare, especially for maternal and child health services than the other parts of the province, according to a case study on Healthcare in Pakistan’s Violence-affected Areas, published in BioMed Central’s Conflict and Health journal.

Speaking to Voicepk.net, former Balochistan chief minister Dr Abdul Malik agreed with the findings of the study, saying that the health and education infrastructure was non-existent in many parts of the province.

He said non-availability of skilled health force – especially lady health workers and doctors – was the major cause in the high infant mortality rate in the province which was one of the highest in the country.

‘Health infrastructure not a priority for present govt’ 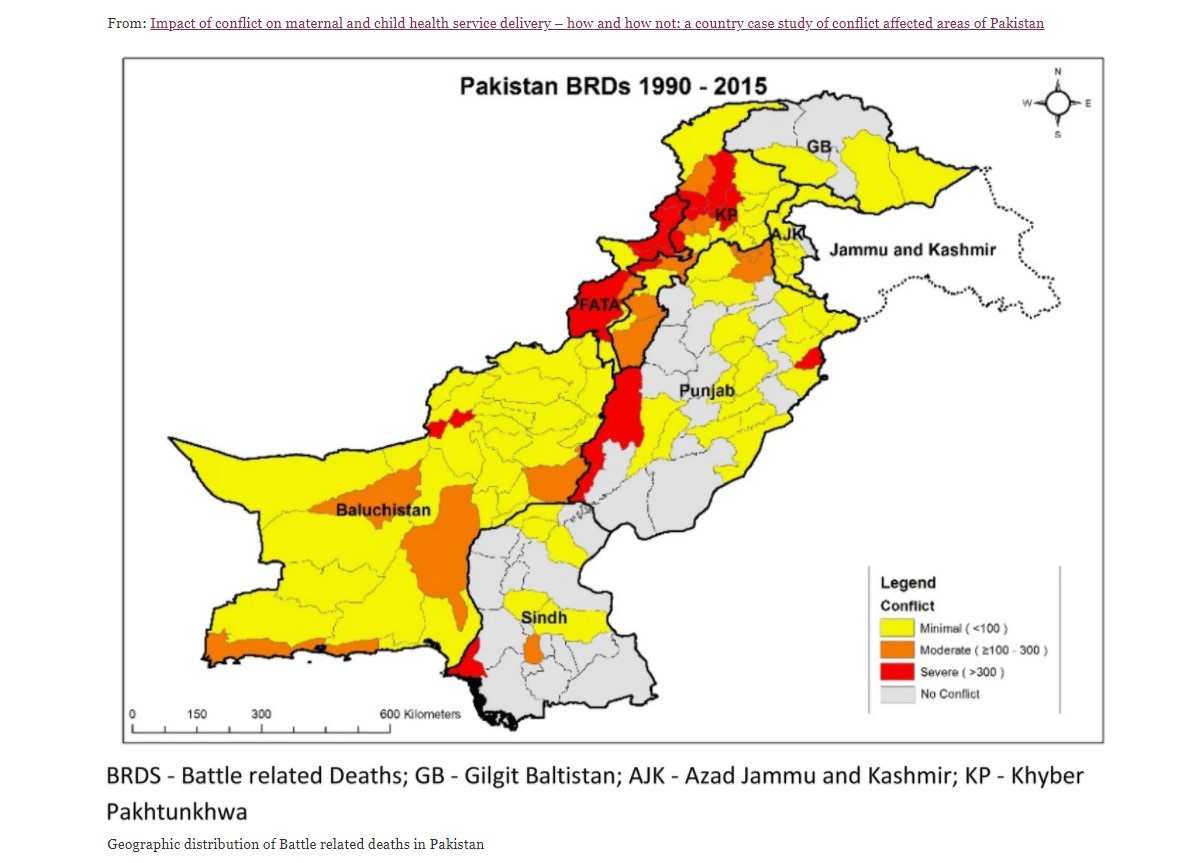 “The present government has brought spending on health down to two to three percent of the budget,” he said, adding that now the focus was on building roads and highways instead of healthcare and education facilities across the province.

“The provision of healthcare infrastructure in Balochistan is a challenge which cannot be met until successive governments allocate and prioritise spending on health and education in the provincial budgets,” he said. 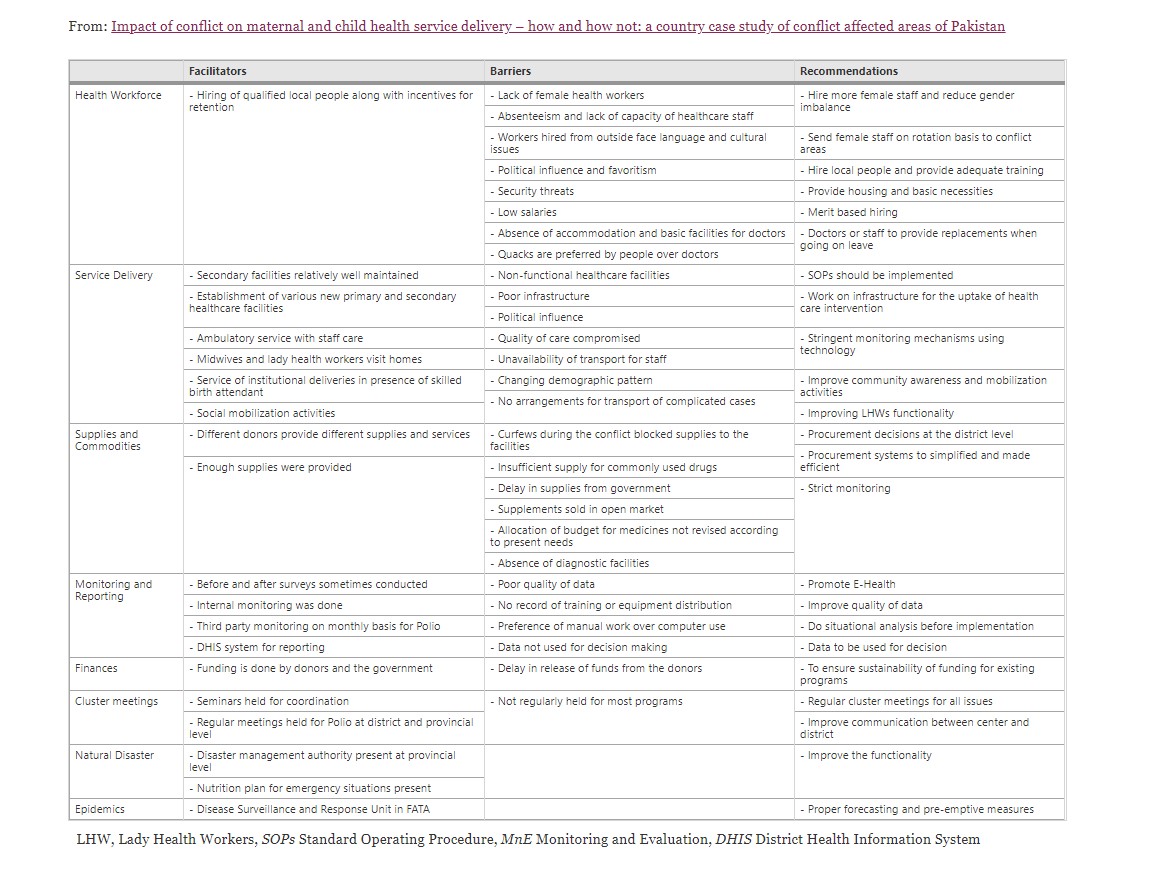 Researchers at Aga Khan University and the Centre for Global Child Health at The Hospital for Sick Children in Toronto, Canada, conducted the case study in two areas of Pakistan: Balochistan – with a specific focus on the Makran belt that includes the districts of Gwadar, Keich and Panjgur – and the former FATA region (now tribal districts of Khyber Pakhtunkhwa) due to the chronic nature of conflict in these areas. 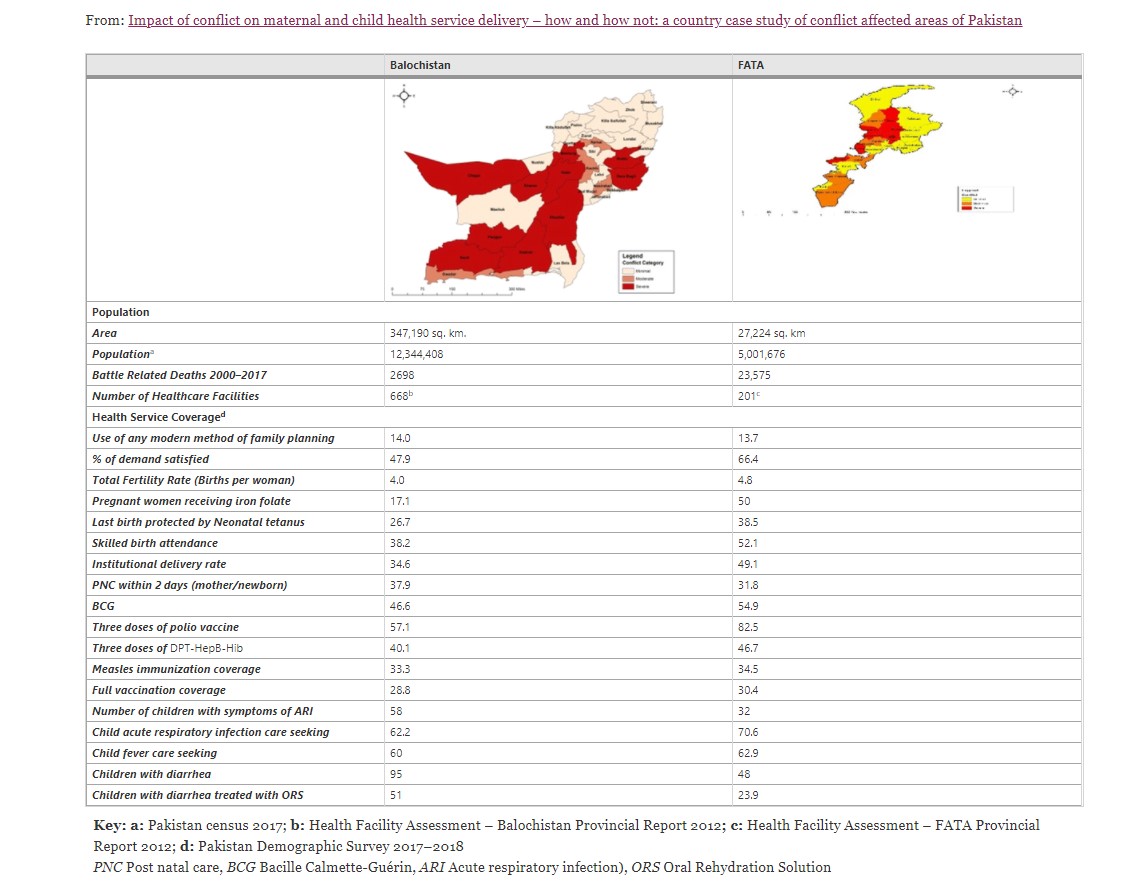 The study consisted of a qualitative and quantitative analysis of the provision of reproductive, maternal, newborn, child and adolescent health and nutrition services (RMNCAH&N) comparing coverage in districts facing minimal, moderate and severe levels of conflict.

Researchers added that roadblocks and curfews in conflict-hit areas further exacerbated supply chain challenges and compromised healthcare by restricting the availability of essential medicines and commodities.

Stringent government regulations on NGOs working in FATA and Balochistan were also impeding efforts to expand access to healthcare.

Another major bottleneck in delivering health services was the non-availability of health professionals of all cadres, especially female health workers.

On a positive note, the study pointed to the success of a health workforce strategy adopted in district Keich in Balochistan.

This involved sending senior staff on rotations between the district center and far-flung areas for a week in a month, thereby helping expand access to healthcare in remote areas.

“At present, we have broad guidance on aiding women and children that do not take into account the long-lasting impact of persistent conflict on the local population and the healthcare infrastructure.” AKU researchers Zahra Ali Padhani, Sultana Jabeen, Arjumand Rizvi, Uzair Ansari, Malika Fatima, Ghulam Akbar, Wardah Ahmed and Zulfiqar A. Bhutta are co-authors of the paper.

One of the major bottlenecks in delivering health services was the non-availability of health professionals of all cadres and especially female health workers, the study stated.

There have been incidents of harassment, target killing, security threats and kidnapping of the health workforce specifically the polio workers. There have also been instances of land mines explosions, snatching of private vehicles of healthcare workers, hence they were reluctant to travel in their own vehicles and travelling in government vehicles made them prone to attacks from anti-state elements.

“It’s like that there is no law and regulation in FATA, so the majority of the appointments are due to political influence,” one UN official told the study authors.

The other major reasons apart from security issues included lack of housing facilities, unavailability of electricity, water, food and other basic necessities; hence it was difficult to attract workers even with higher salaries to work in these areas.

Hiring outsiders is an issue, as they were reluctant to serve these areas and also have socio-cultural and language issues leading to reduced acceptability from the community. The political interference also affected health workforce availability, as people hired on political influence were less qualified, irregular on duties and lacked experience.

The experienced and senior grade staff moved to major cities and the reliance in these rural areas was on junior staff.

“There is no security, no environment to work, no place to live and our health facilities are in pathetic condition. Why would anyone work here? I even got a threat of being kidnapped,” a government official said.

Most of the health facilities were primary health care facilities which were unable to fulfill all the health needs of the community and the available funding was not enough to ensure minimum infrastructure and equipment (water, electricity, beds, and supplies), the researchers said.

The stringent government regulations for NGOs to work in FATA and Balochistan, also impeded the work.

There was also absence or lack of laboratory and radiology services and the facilities did not follow any Standard Operating Procedures (SOPs) or protocols although they were present. Staff absence especially female staff, capacity gap and compromised quality of care discouraged the community and this together with lack of regulations contributed to quacks and traditional and faith healers filling the void.

Health facilities received medicines that were not required or demanded

The availability and supply of essential medicine and commodities was a major obstacle to provision of health services to women and children in the areas.

The study noted that reasons for non-availability of medicines included lengthy procurement procedures, inappropriate forecasting and inadequate distribution of supplies between facilities.

The road blocks and curfews during the conflict further exacerbated the supply and hence compromised healthcare.

The slow and tedious procurement systems of the government were mostly controlled centrally with few inputs from the district, hence often health facilities received medicines that were not required or demanded.

Lack of funds and poor budget allocation were also a major reason for this poor management of supplies. The existing pharmacies were not up to the mark and medicines were kept in dust and sometimes were not prescribed due to lack of professionals.

The study pointed out the private pharmacies available in these areas also sold medicines and supplements of poor quality as no monitoring mechanism was in place.

Stock-outs were also an issue sometimes when enrollments exceeded the targeted limit and secondly when there was a gap in supply at the end of the year. Sometimes the staff and the community also sold the nutritional supplements in the open market, which were provided to them by the government and the NGOs.

“There is a large market, where you would find the supplies like nutritional supplements given to the community being openly sold,” an NGO_official told the study authors.

The monitoring and evaluation section in the FATA Secretariat and Provincial Headquarters employ different methods of monitoring including household surveys, DHIS and LHW records. Specific surveys were also sometimes conducted by donors or organizations before, after and during the implementation of the projects.

These systems, though in place, were weak and the data collected was not regular and often of poor quality including fake or incomplete data, especially for DHIS.

The reduced capacity and training of health staff in data collection and monitoring together with resistance to change behaviors and no specific budget for data collection posed additional challenges for adequate monitoring and evaluation.

Even the data that was collected through various sources was also not effectively used to monitor progress or make informed decisions.

“DHIS system is weak, the data entered is not correct. People are not trained for this and don’t even know where the data would be used,” a govt official told the study authors.

Apart from the government, major funds were received from the Global Fund program, Gates foundation, GAVI, WHO, UNICEF amongst others. These available funds were insufficient to tackle the health needs of the population and a major barrier in successful implementation of the programs, while the transparent and efficient use of existing funds was another concern.

There were also delays in release of funds and inadequate distribution between the districts and the health facilities. The capacity gap of the government at various levels also impeded the efficient utilization of funds and at times there were enough funds but remained underutilized.

The specific programs in place operated and funded by various agencies also usually lacked sustainability mechanisms and terminated abruptly when the funding from the donor subsided.

“We have been implementing nutrition projects for three years in FATA and we have not received complete funds from the donor,” NGO staff said in the study.

The study identified inter-organization coordination as an important factor in the successful roll-out of programs and uptake of interventions especially in conflict settings and cluster meetings were an important means of coordination.

These cluster meetings though in place for various programs were conducted irregularly except for immunization and polio.

Cluster meetings for immunization were held monthly and led by WHO and were held at district and provincial level where the donors, government, district and field staff and program coordinators met and discussed progress and specific issues and deliberate on possible solutions.

UNICEF usually led the nutrition cluster meetings but these meetings were rarely conducted. Infrequent meetings were also held between the provincial health directorate and the district staff.

“Cluster meetings are important especially in an emergency situation. Our coordination team should be very strong so that it timely updates about any outbreak situation or severe situation. It is like an advocacy forum where needs are identified,” one of the UNOfficial told authors of the study.

There was a disaster management authority present at the federal and provincial level and FATA to look after natural disasters.

There had been outbreaks of measles, pertussis, diphtheria and dengue in areas of FATA such as Bannu and Khyber agency, while measles was also reported in Makran Division of Balochistan.

There was a Disease Surveillance and Response Unit which looked after these outbreaks, but usually the response was inadequate, the study noted.

For the past five decades, #German archaeologist Prof. Dr. Michael Jansen has been involved in the excavation and preservation of #Mohenjo_Daro: #IrfanAftab's report for @dw_urdu about Prof. Jansen's selfless services & love for #Mohenjo_Daro

Female students & teachers of Hazara University in Mansehra and Bacha Khan University in Charsadda have been barred from wearing jeans & T-shirts per a new dress code which will be instituted in all universities in Khyber Pakhtunkhwa in phases.

The #education of girls continues to be mired in difficulties in Swat as elders again demand government vacate buildings of institutions in the use of security forces for the last 12 years.

Saying ordinances were against the spirit of a parliamentary democracy in http://Voicepk.net’s webinar, PML-N MNA Mehnaz Akber Aziz pledges to work across party lines on anti-rape legislation