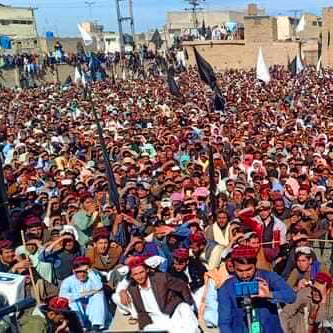 Cross border trade between Pakistan and Afghanistan has resumed in the border town of Chaman on November 30, after authorities agreed with the filing of a first information report (FIR) against law enforcement officials over the killing of a teenage boy. The boy was killed during day-long clashes between protesting tribesmen and border security officials on November 29.

Apart from him, 32 other civilians were injured in the Pakistan-Afghanistan border town, the administration confirmed.

Residents said the clashes erupted after security personnel allegedly thrashed a boy, forcing residents and cross border traders to protest against the torture. In order to disperse the protesters, security forces resorted to aerial firing during which a 17-year-old boy, Matiullah, and several other protesters were wounded in the firing. Later Matiullah succumbed to his wounds on the way to a hospital in Quetta. Following his death, the protest turned even more violent with demonstrators blocking the Chaman Mall Road. Protesters pelted stones as security officials resorted to aerial firing throughout the day to disperse them. The administration and leaders of political parties had to resort to holding talks with the protesters who only promised to call off their demonstration on the assurance of their demands being met.

“We are in coordination with Frontier Corps personnel on the border as well as with leaders of political parties to ensure such clashes do not occur in future,” said Zakaullah Durrani, assistant commissioner of Chaman, told Voicepk.net. He said the administration and the Levies Forces always tried to avert such incidents from happening, adding that whenever such events occur, their personnel intervene and settle the issues.

Meanwhile, Pushtun Tahaffuz Movement (PTM) held a protest outside Balochistan Assembly  in Quetta. Behram Khan, a family member of the deceased Matiullah, said the protest was called off after the administration acceded to some of their demands.

PTM is protesting in front of the provincial assembly in Quetta against #StateAtrocitiesInChaman. This is not the first time the FC has killed civilians in Chaman. We demand for the killers to be arrested and prosecuted. We demand justice.

Khan said the protesters had laid six conditions for calling off the protest which included the filing of an FIR against security personnel for the killing of Matiullah, the formation of a judicial commission to probe clashes occurring in the last one year, and the withdrawal of cases against the participants of a political gathering.

Strongly condemn FC’s firing on unarmed civilians in Chaman. Security forces continue to attack our people mercilessly. What laws allow the FC to open fire on unarmed civilians? Will the FC personnel who attacked civilians be arrested and prosecuted? #StateTerrorismInChaman pic.twitter.com/tf8ggepkly

“The administration has accepted three of our demands including registration of an FIR,” Behram Khan told Voicepk.net. However, the FIR that the administration has registered is vague. According to the FIR, Matiullah, accompanied by his two uncles, was passing through the Bab-e-Dosti gate on the Pak-Afghan border when he was fatally wounded with a bullet in the head from the firing of law enforcement officials trying to disperse protesters there. The complainant in the FIR is a third uncle Muhammad Rafique.

Meanwhile, others also condemned the attack.

#Pakistan’s #PuppetPM has nothing to say about #FC’s indiscriminate attack on citizens in #Chaman. Daily attacks in #Waziristan & return of Taliban in #Pakhtunkhwa but has time to promote soaps. Trust me the #Pindi #PuppetShow is enough for the public to endure. #GayaPakistan https://t.co/dwc1ei0Azq

Protesters are sitting in front of assembly in Quetta with the dead body of a child killed in yesterday’s firing, new casualties in FC fire again today in Chaman.With most players having put their back on them, people in Chaman are left to FC’s bullets.#StateTerrorismInChaman