PESHAWAR
It has been years since the horrific incident, but the bereaved parents whose children were ruthlessly martyred during the attack on the Army Public School (APS) Peshawer, are still grieving the same way. 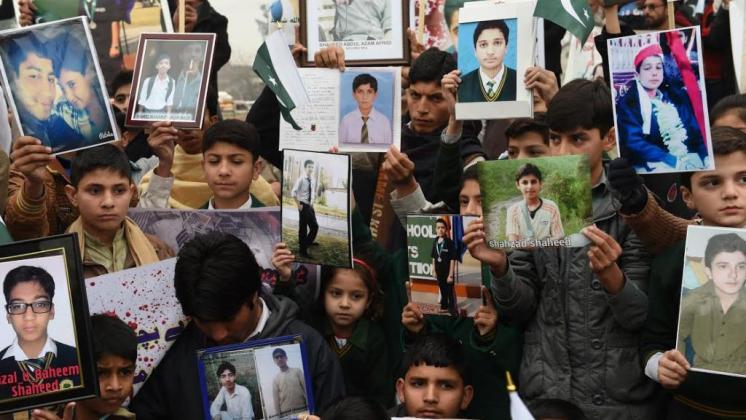 Part of the reason is that they are yet to  be given justice, for their children’s blood even as the country marks the sixth anniversary of the black day that changed Pakistan’s emotional landscape.

A day ahead of the anniversary of the dark day, parents of the martyred students gathered at the Shuhada-e-APS Memorial Library in Peshawar, to pay homage to the victims of the massacre that claimed lives of more than 140 students and staff members. The defunct Tehreek-i-Taliban Pakistan (TTP) had claimed responsibility for the deadliest school attack in the country.

The organizers of the memorial event, organized a Quran khwani and prayed for the departed souls. Later, the parents and other participants held a candlelight vigil in front of APS building.

Most of the parents have not reached any closure even after the passage of six years. The only times where they have an opportunity for empathy, is times like these, when they all collect to remember their lost children. It is only them who can understand the depth of the grief that consumes them.
“They are gone and can’t come back,” says one of the parents. “But we will strive till the end of our days to see that they get justice.”

Asfan Khan’s father, Ajun Khan, tells Voicepk.net that despite making the APS Commission report public, where security lapses have been duly pointed out, sadly and infuriatingly those responsible for the lapses have not been given any punishment.

“Whoever caused these security lapses should be punished,” says Ajun Khan blankly. “With regards to the proceedings in the case, the apex court should demand the lodging of a first investigation report (FIR) against those responsible for the security lapses that have been highlighted in the commission report,” he says.

He says only lower rank personnel and officials have been awarded with punishment, but the parents will never be fully satisfied, until FIRs are registered against the higher-ups.

A judicial commission had been formed on the directives of the then Chief Justice of Pakistan, Justice Saqib Nisar, that too on the demand of the parents of the martyred children. The parents had demanded that the massacre be investigated.

On July 9, 2020, the presiding officer of the commission, Justice Muhammad Ibrahim Khan, had submitted its report to the Supreme Court of Pakistan. According to the spokesperson of the commission, 132 people had recorded their statements before the commission that included 31 police and army officials, 101 survivors and parents.

Following the apex court order, the report was made public on September 25, 2020, and pointed at security lapses and local facilitation to terrorists that consequently resulted in the terrible attack.

“When one’s own blood and flesh commit treachery and betrayal, the result would always be devastating”, the report reads. The report states that no agency, no matter how capable or equipped, could effortlessly counter an attack ‘when infidels are within the inside.’

The ministry had issued an order against the promotion of Brigadier Mudassar Azam and also barred him from any re-employment after retirement.