“My husband has not divorced me himself, but he is pressuring my father and brothers to kill me telling them that if they don’t, then he will,” says Gulshana Shar of Sanghar in a video which went viral after she was murdered on November 7 by her brother.

After Voicepk.net published the story, the Khoi Police arrested Taj Muhammad the brother of Gulshana. Khoi Police SHO Zahid Hussain Brohi told Voicepk.net that Taj Muhammad would be produced before a court for physical remand in the case. He said Taj has confessed to the crime saying that he was under pressure from fellow tribesmen to carry out Karo Kari.

The downpour of comments on social media blamed police and the provincial government for not protecting the Karo Kari victim. However, local police officials say Gulshana Shar was provided protection when she first approached them on August 3, 2020. The very next day, she was taken to a local court in Khipro. The court had sent Gulshana to a shelter home in Hyderabad under police protection.

She had spoken to local reporters about her ordeal in the court building. “My name is Gulshana. My father’s name is Mohib. My husband Juman wants to kill me on the pretext of Karo Kari (honor killing),” says Gulshana Shar tells reporters in the video. “My husband has not divorced me but he is pressuring my father and my brothers to kill me saying if you don’t, we will. I have no children and I was married two years ago. There has been no decision yet. They will kill me, my father, my mother and brother. They will murder all of my family,” Gulshana says further in the video.

Twenty days later, her father approached the court saying the family feud had been resolved and he wanted to take her daughter home. On August 25, police brought back Gulshana from the Darul Amaan shelter home in Hyderabad and produced her before the local court. The court handed over custody to her father and she began living with her father in her ancestral village of Daulat Abad.

On November 7, Gulshana’s brother Taj Muhammad argued with his father that he was under increasing pressure from Juman, Gulshana’s husband and some other people from their tribe, to kill her sister according to the tribal custom of Karo Kari. According to the first investigation report (FIR), Mohib tried to dissuade his son from the killing but Taj Muhammad shot and killed his sister with a double-barrel gun fleeing from the house afterwards.

Police had at the time registered a case against the main accused, Taj Muhammad, Gulshana’s brother, Juman, husband of Gulshana, and five others, Yousaf, Dur Muhammad, Gul Baig, Maroof Yaqoob, said to be tribesmen who had instigated the killing.

Senator Qurutlain Marri of Pakistan People’s Party, whose sister Shazia Marri is a Member of National Assembly from Sanghar, had claimed at the time that the police had arrested four people in the case.

Soon after her killing in Sanghar, a video clip in which Gulshana is seen speaking about her ordeal on August 4, went viral with a hashtag of #JusticeforGhulshanaShar on social media. The comments mostly blamed the local police and the Sindh government in not doing enough to protect Gulshana Shar who had sought help from the State for protection. Responding to this accusation, Senator Qurutlain Marri told Voicepk.net that the police and the State had protected the victim when she first approached for help.

“The girl went to the police who protected her and presented her to Court. The court then sent her to Darul Aman. After that her father went to court and appealed the decision. He said the matter was resolved and his daughter should be sent back with him. The court recalled the girl from Darul Aman and sent her back with her father,” she said, explaining the background of the case.

Senator Marri believed that police did their duty and ensured Gulshana’s safe presence in Court, adding that the murder FIR was immediately lodged and local police was conducting raids to arrest all the accused. The senator said the entire family was responsible for what had happened, adding that people needed to stop bowing down to pressure to try and justify the murder of a woman.

However Marri had added that they had been confident and efforts were being taken to ensure justice is served in the honor killing case, adding that her sister, MNA Shazia Marri, was taking regular updates from officials handling the case as the area is in her constituency.

Senator Marri said she and her sister fear the same in this case and have asked input from Murtaza Wahab, Chief Minister’s Advisor on Law, whether the Sindh government can become a party in the honor killing case. 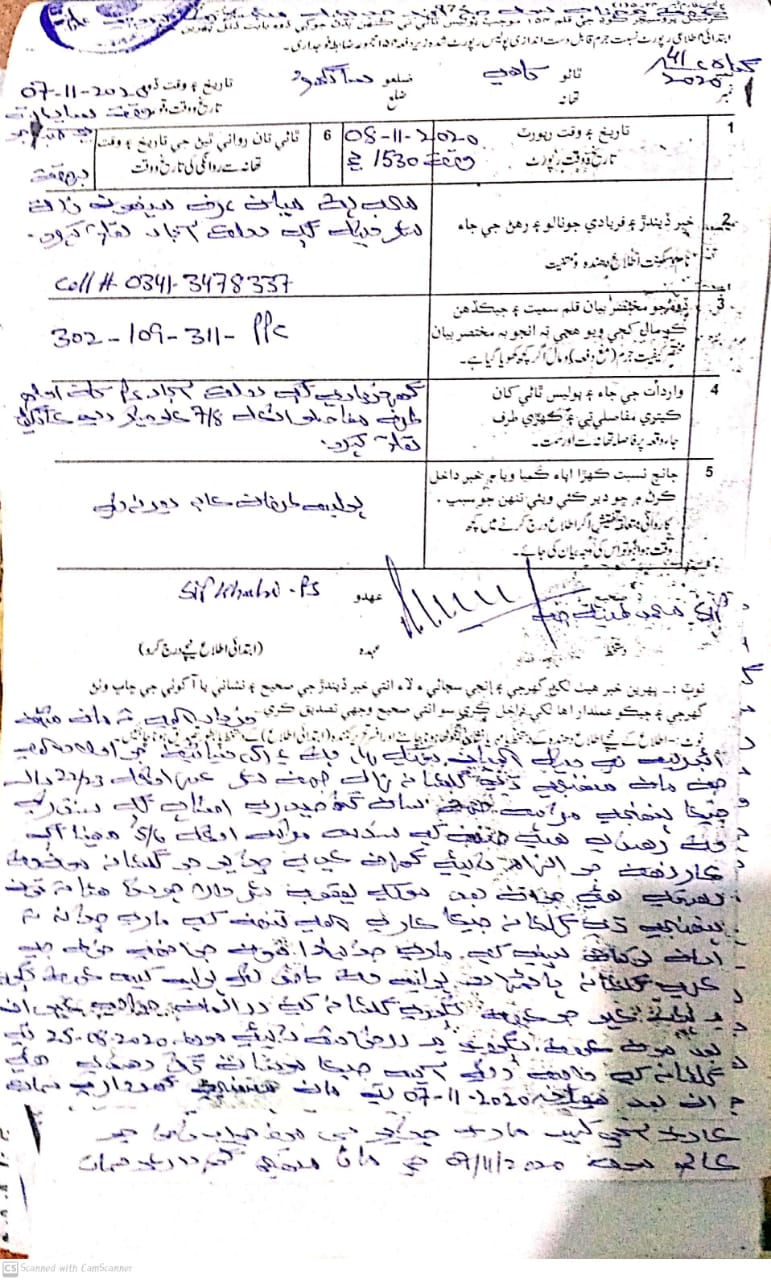 Khoi Police Station SHO Zahid Hussain Brohi said police was conducting raids to arrest Taj Muhammad and other suspects, adding that most of the suspects were nomads and had no fixed abode. Brohi said the investigations were ongoing and uptil now Gulshana’s father seemed to have no role in the killing of his daughter.

However, he added that the once the main accused Taj Muhammad, 30 years old, is arrested the investigators would have better understanding of those involved in the murder.

He said her husband Juman lived in Umerkot and it could not be confirmed whether he was at the scene of the murder.