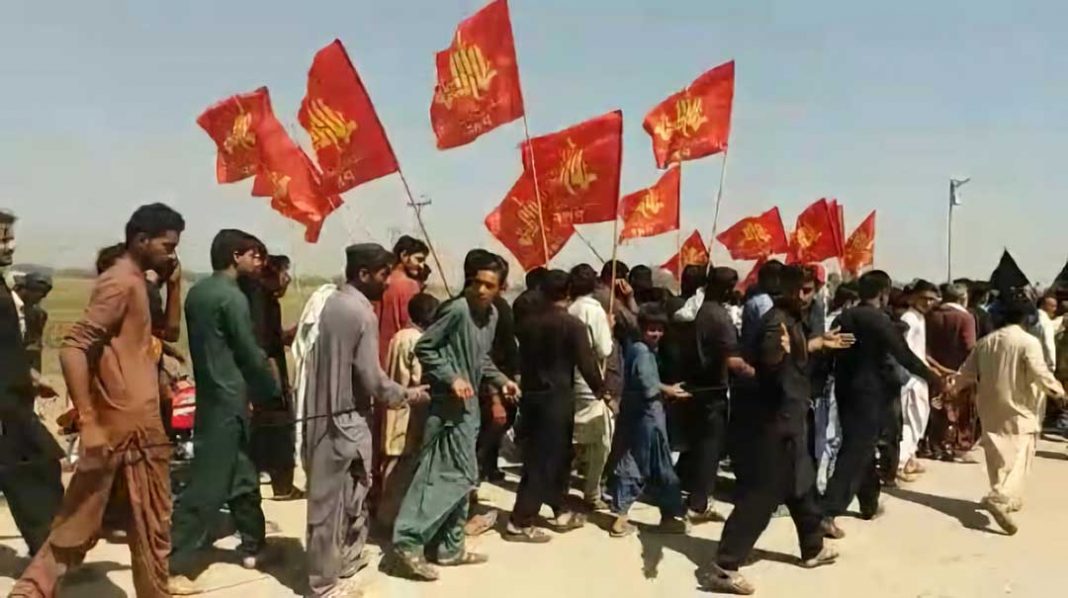 Sindh police has booked at least 950 mourners for allegedly blocking roads and for airing ‘hate speech’ when different Shia groups were about to take out processions in Jacobabad and Hyderabad on Tuesday, October 6 and Thursday, October 8 respectively.

Cases have been registered in two police stations in Jacobabad, seven in Jamshoro and Kotri and five in Hyderabad for holding processions without permission.

At least 100 unnamed mourners have been booked in Naseem Nagar, Latifabad A and B Section, Hali Road, Sakhi Pir, Kotri and Jamshoro police stations.

The two cases were registered at Abad and Mubarakpur police stations of Jacobabad by Inspector Asif Ali Mangrio and ASI Mansoor Ali Bhutto against the mourners on the eve of ‘Arbaeen’, but no arrests were made by the police.

Another case alleges that the same people nominated in the aforementioned complaint along with 600 others have been allegedly committing the same crimes before as well.

The sections applied in the FIRs include 341 (wrongfully restraining any person), 117 (abetting commission of offence by the public or by more than ten persons), 188 (disobedience to order duly promulgated by public servant), 153-A (hate speech), 147 (rioting), 143, 144, 151 (unlawful assembly) and 149 (common objective) of the Pakistan Penal code.

A procession approaching from Garhi Khero to Jacobabad under the leadership of Bandah Ali Jaffri was stopped by the police after which the security at exit and entry points was tightened which caused problems for the mourners leading to a protest that blocked the National Highway.

SSP Jacobabad, Tariq Nawaz has also suspended the SHO Mubarakabad Roshan ud Din for neglecting his duties which included allowing the procession to continue without permission from the concerned state officials through the proper channels.

A local journalist told Voicepk.net that police took action because the route of the procession passed from Sunni majority areas which created risk of sectarian violence during the event if police had not intervened or accompanied the procession.

Some local Shia leaders were also accused in the FIRs including Syed Ahsan Ali Shah, Syed Gulzar Shah, Syed Kamran Shah, and relatives of the deceased laid the body at DC Chowk during a sit-in protest.

According to Rind’s family, he died from harassment and hence police were responsible and action should be taken.

Jacobabad is considered to be a stronghold of the Majlis-e-Wahdatul Muslimeen but the city of Thal in particular has a strong presence of the Jamiat Ulema-e-Islam (F) historically due to multiple religious schools ran by the party.

This is not the first time a Shia rally has been stopped by the police in recent times due to risk of reactions from opposing sects.

The Sindh government had imposed a ban on religious congregations and processions but later marginally relaxed its restrictions on the occasion on the condition that all participants would properly follow all precautionary instructions.

According to reports, the relaxation was granted on the request of Shia leaders, who gave assurances that all SOPs would be followed and the number of participants would be limited.