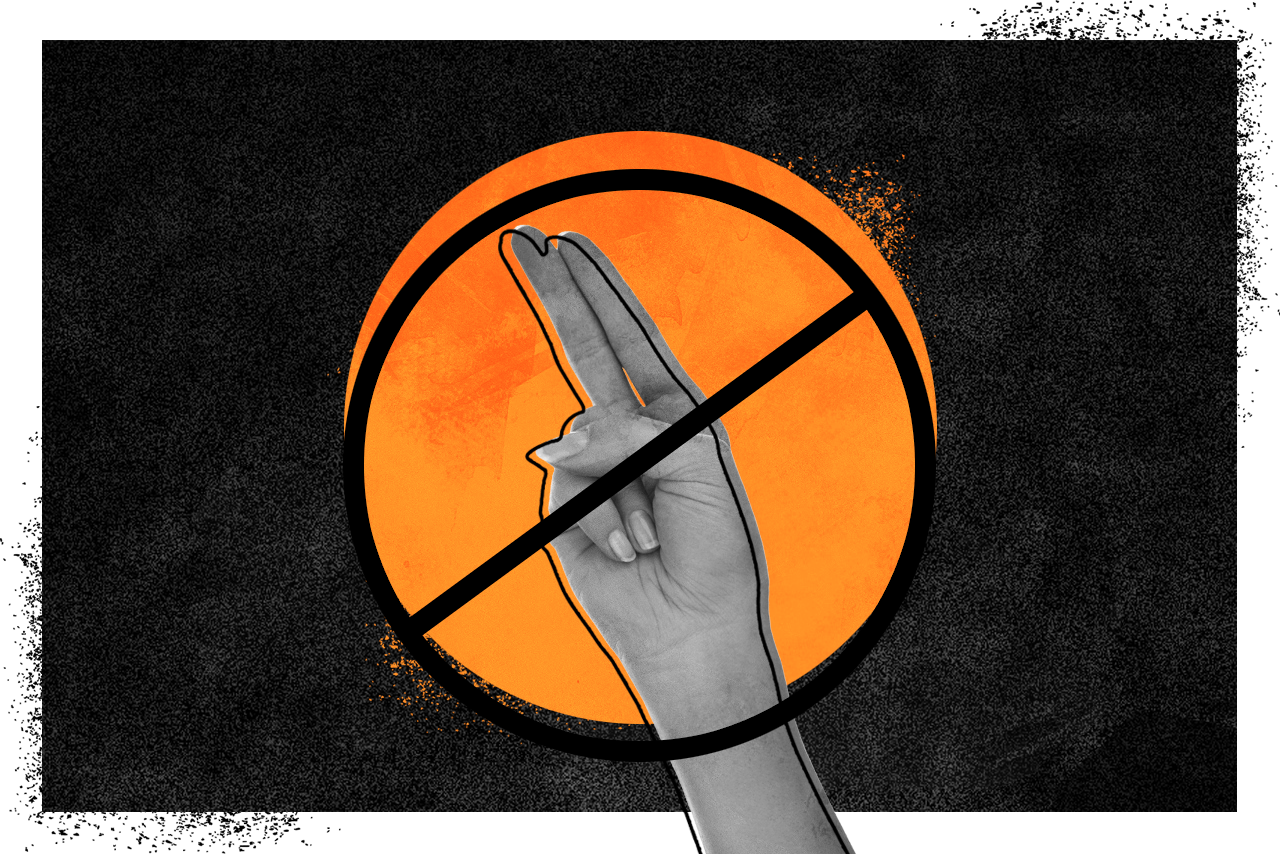 Women’s rights activists may be successful in their demand for the ban on a controversial medical examination procedure called the Two Finger Test (TFT). Last week the government recently submitted its joint reply to two petitions that had challenged the test usually used to ascertain whether the hymen of the woman is intact or not and indicating the status of the woman’s virginity. Unfortunately, the decades-old practice in Pakistan is also part of a medicolegal examination for a rape survivor.

In March 2020, a group of women – journalists, activists, and academics moved the court (Lahore High Court) demanding a ban on the controversial test that is not only unreliable but also extremely humiliating for women to endure, especially if they are rape survivors. The petition was filed by women including Sadaf Aziz, Farida Shaheed, Farieha Aziz, Farah Zia, Sarah Zaman, Maliha Zia Lari, Dr. Aisha Bedar, and Zainab Husain. Their petition was then clubbed together with another that had been filed by PML-N MNA Shaista Parvez Malik with Sahar Zareen Bandial and Barrister Sameer Khosa as lead counsel.

Because of the Covid-19 emergency in the country soon after the petitions were filed, the matter was not broached again, but on September 12, 2020, the provincial health authorities appeared in the LHC to record their responses. They have stated that TFT has limited evidentiary value and will be eliminated from the protocol of medicolegal certificate unless necessitated.

The case against TFT argued that “Neither the size of the vaginal opening nor the ease with which the fingers can be admitted or the state of the hymen is medically sound indications of prior sexual activity. Such tests are banned in India and Bangladesh.”

As their response, the Punjab Specialized Healthcare (PSH) and Medical Education Department, the Primary and Secondary Healthcare Department, and the medicolegal surgeon Lahore submitted a reply stating, “It is not the objective of the medical examination of the female rape survivor to comment about her character, neither is the TFT being practiced with that objective nor does it have any strong evidentiary value related to the determination of virginity.”

They also added that only authorized women medical officers (WMO) conduct the examination, that too with the consent of the survivor. The next hearing of the case is set for November 6.

Despite the government’s response saying that the practice was not done in any way through which the survivor’s character could be tarnished, court cases in the past show otherwise. One glaring example is a 2012 judgment of the LHC in the case of Rafiq Ahmad vs the State.

“In the instant case of the hymen of Miss Bibi (the victim) was ruptured at 3, 4, 5, 6, 7, 9 and 11 o clock. This is suggestive of the fact that the victim was a woman of ‘easy virtue’,” said the judgment. “The female doctor also observed that the vagina of the woman admitted two fingers which are prima facie if rape is committed only once with a virgin victim”, remarked the court before releasing the suspect.

Many other similar case studies have been included in the petitions filed by the women.

As far as attaining the consent of the survivor, what the government is showing may not even be the true picture of what is out there.

“Even though it is necessary to attain written and informed consent of the victim before conducting such tests, MLOs rarely do so,” says Sarah Zaman, a Karachi based women’s rights activist and a consultant in the development sector. “The victim is forced to re-live her trauma for something which should have no standing in the court of law especially after 2016. Conducting such a test is redundant because there is no evidentiary grounding that is provided to establish whether the act of rape occurred.”

The Law of Evidence

The Qanoon-e-Shahadat order (Law of Evidence) implemented in 1984 had a ‘special’ stipulation targeting witness testimonies of victims of rape. Article 151 (4) of the Law of Evidence Bill, stating that “A man who is prosecuted for rape or an attempt to ravish it may be shown that the prosecutor was of generally immoral character.” It was this that essentially linked the legitimacy of survivor’s testimonies to their perceived “morality”.

Advocate Sehar Bandial says that after months of very hard work, they were able to draft and push for the acceptance of the Criminal Law (Amendment) (Offences Relating to Rape) Act 2016, which got rid of Article 151 (4) of Zia’s Law of Evidence order. “In addition to getting rid of this stipulation, the 2016 Act made it clear that a rape victim’s testimony cannot be disregarded merely on the basis of her “moral standing” or the “sexual history” of the victim.”

“Even after the passage of the 2016 Act there have been instances in which the decisions of the court were marred by moral biases founded in the victim’s sexual history,” explains Advocate Sehar Bandial. “Back in 2016, we had to lobby very hard against this stipulation of the Law of Evidence. Courts heavily relied on the testimonies of female MLOs, who essentially had the final word about the legitimacy of witness testimonies,” she says.

Virginity testing is by no means a phenomenon unique to Pakistan or even the Indian sub-continent. Anthropologists trace back the first reported cases of virginity testing to tribal societies in both India and Africa. The ‘tests’ were primarily conducted by aged women of the tribes to assess and preserve the ‘purity’ of tribal lineages.

Interestingly, different regions of the world had completely distinct methodologies of conducting these tests.

While some believed that an “enlarged” vagina was indicative of promiscuous sexual behaviors others looked for signs of rupturing of the hymen. Following the same pattern, the two-finger virginity test, whereby two fingers are inserted inside the vagina to assess the laxity of the vaginal orifice, is a centuries-old technique to determine the ‘honor’ of women of the society.

India also saw its first institutionalized usage of this practice during the British Raj. Native Indian women were considered ‘cunning and prone to lying habitually about rape allegations’ and the test was introduced to both punish the native woman and to test the legitimacy of her claim. Though the test never became a part of formal constitutional structure both India and Pakistan continued employing such tests to ‘medically assess’ the validity of rape allegations. Even after multiple pieces of research pointed towards the non-medical, unethical, and illogical basis of such practices.

In 1979 the TFT became redundant in Pakistan, but only owing to the deeply patriarchal Hudood Ordinance promulgated by the then military dictator Zia-ul-Haq who placed consensual pre-marital sex and rape under the same legal ambit of ‘Zina’. Under this ordinance, rape survivors were required to produce four witnesses to substantiate their claim of being subjected to Zina-Bil-Jabar, (forceful sex/rape) failure to do so resulted in legal action against them under the newly formed Zina laws (Adultery laws). This law, further entrenched the culture of silence regarding rape and sexual assault incidents. And while the state at that time relied more on the four witness’s clause to deal with rape allegations the two-finger virginity testing continued unchecked in different social segments.

Even after Zia’s death and Benazir Bhutto’s rise to power as the first female Prime Minister of Pakistan the Hudood Ordinance remained unchanged.

But in 2006 Western pressure forced the ‘secular’ dictator Musharraf to repeal the worst chunks of the Hudood Ordinance the most prominent of which was the re-categorization of adultery and rape as separate offenses under the PPC. However, as soon as rape became a separate offense under the 2006 women’s protection laws, the old regime of validating rape allegations using the TFT made a resurgent come back. So repressive was General Zia’s reign of terror that even the TFT was considered an improvement over the barbaric Zina Ordinance that Zia had constructed.

Though the coming years saw a slew of more progressive legislation in the country under subsequent democratic governments, the ghost of Zia’s anti-woman assault continued to persist. In India and Bangladesh, the test was finally banned in 2013 and 2018 respectively.

But in Pakistan, such tests are still widely conducted and it is still enshrined in the guidelines of the medico-legal department as an SOP for rape cases.

Section 375 of the Pakistan Penal Code (PPC) employs five sub-sections to elucidate the term “rape”. Four out of these five sub-sections are centered around the word ‘consent’, the one sub-section which seemingly overlooks the term retains its essence, using the term ‘will’ in its stead.

The language of Article 375 leaves out no obvious room for ambiguity, sexual intercourse between a man and a woman without the explicit, informed and voluntary approval of the latter constitutes rape. Following the recent uptick in sexual violence in the country, our rulers must overcome their misogyny and realize that rape is never “called for” because it is, by definition, an “act against your will.”

“Rape is basically a crime based on the absence of consent,” says Sarah Zaman. “And in the context of the TFT, the courts cannot pre-suppose consent just because the victim was sexually active.”

“Under the current legal mechanisms, the victim’s statement, marks of violence on her body, circumstantial evidence, and DNA evidence (per the DNA Act), in this order, are central to decisions in rape cases. Why do we need this test?” she asks. The petition that Zaman is part of also calls for a ban on terms like ‘women of easy virtue’, ‘habituated to sex’ and ‘loose morals’ from being used in medico-legal reports of the victims of rape.

“In view of recent legislation and the judgments of higher courts, it is the statement of the victim herself which is considered prima fascia evidence if it ‘inspires the confidence’ of the court. This basically means that if the victim stands by her testimony and the defense cannot point out visible loopholes in it, rape will be established,” says Advocate Qamar Ramay, a lawyer at the AGHS (Asma Jahangir) Legal Aid Cell. “Since the testimony of the victim is so central now, defense lawyers who act as counsels for the accused utilize the results of the TFT conducted as part of medicolegal guidelines and not as a legal requirement (anymore).”

Muzaffargarh police arrested a man for uploading obscene pictures of an 11-year-old girl on his Facebook account’s story after keeping her hostage in his house.

Senior Lawyers have read the Supreme Court’s decision in the Faisal Vawda case as a window of opportunity for Nawaz Sharif to reverse his longtime disqualification through SC and reenter in electoral politics.

A rape victim protested outside Imran Khan's Zaman Park residence against the Lahore police for not arresting the rapists.

The victim, who was gang-raped in the Kot Lakhpat area, alleged that police officer Iram Shahzadi slapped her & released the accused Ikram for a bribe.

#Khanpur police have arrested a man for torturing a #transperson for filing a complaint against him.

Farooq Sajna of Mouza Dhand Gagri, Khanpur tehsil, stated that she was returning home when armed suspects Akbar, Salim, Saeed & Jamil Arian beat her up and assaulted her. #EndGBV