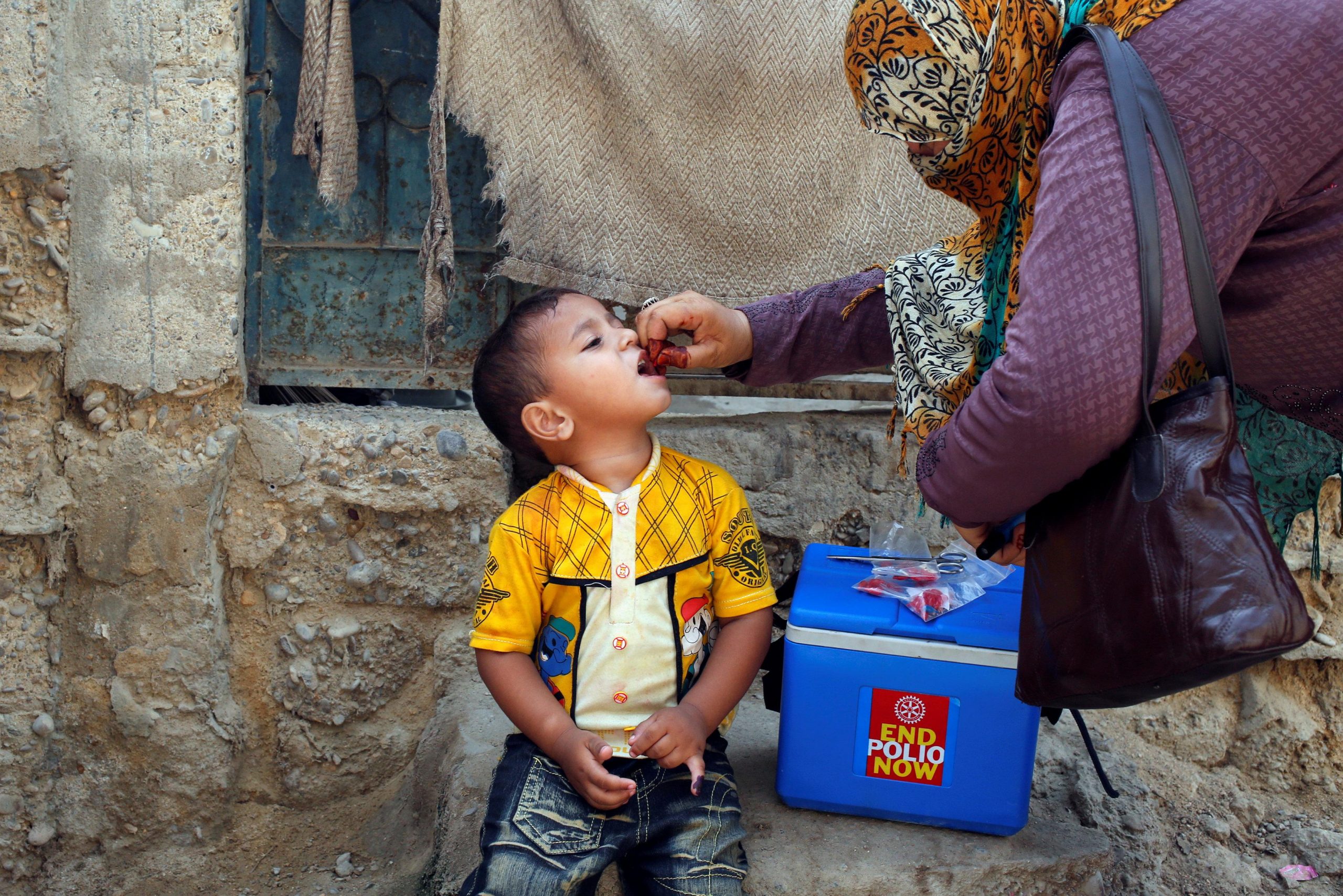 A five-day nationwide polio campaign has begun with the aim of reaching 40 million children across the country with the lifesaving polio vaccine after a seven-month suspension during the COVID outbreak.

A team of 275,000 polio workers will administer drops to children in the country from September 21 to September 25. “A request to parents and caregivers to cooperate with the (polio vaccination) teams to work towards a polio-free Pakistan,” said Dr Faisal Sultan, Special Assistant to the Prime Minister on Health, in a tweet to mark the launch of the nationwide vaccination drive. The campaign began in all four provinces and Azad Jammu and Kashmir (AJK) and Gilgit Baltistan.

This will be the first nationwide campaign in Pakistan since February due to suspension during the pandemic. Earlier in July and August of this year, smaller case response campaigns were conducted to vaccinate children in high-risk districts of the country. The scope of the present campaign is much larger and seeks to vaccinate all Pakistani children under the age of five through door-to-door visits by a cadre of vaccinators deployed across the entire nation.

As with the previous campaigns in July and August, polio vaccinators have continued to receive comprehensive training on how to vaccinate children safely within the COVID-19 context. This includes thorough prevention measures, such as hand washing, proper use of masks and keeping a safe distance from people during visits. Moreover, the programme has put strict measures in place for all staff following the Government of Pakistan’s set guidelines on COVID-19 preventative measures.

Speaking on the campaign, Dr Rana Safdar, the Coordinator of the National Emergency Operations Centre of the Pakistan Polio Eradication Programme, urged all parents with children under the age of five to ensure vaccination against this paralytic and sometimes life-threatening disease.

“This is an opportune moment for parents to make sure that their children are vaccinated against polio. We have made sure that all safety measures for COVID-19 are in place to protect children, their parents and caregivers as well as our vaccinators. The safety and health of our people will always come first,” he said.

To mitigate the risks associated with the widespread presence of the virus, the Pakistan Polio Eradication Programme is planning to conduct back-to-back national vaccination campaigns in the remaining months of 2020 as well. Children will also continue to receive routine immunization services at fixed health centres across the country.

Pakistan and Afghanistan sole strongholds of polio in the world

Pakistan and Afghanistan are now the only remaining strongholds of the virus in the world after Africa reported itself free of the poliovirus. “With the news of Africa being certified as polio-free, we are also ramping up our efforts to bring us closer to a polio-free Pakistan. We are consistently reviewing our campaign performance and responding to the needs of the communities we interact with in order to improve our outreach and capacity. Moreover, we are integrating and synergizing systems and services across our polio and immunization programmes to accrue benefits from their respective assets and opportunities and ultimately strengthen the routine immunization of children,” Dr Faisal Sultan had said in an earlier statement.

Challenges to the polio vaccination drive

Pakistan has reported a total of 73 cases this year with 9 cases confirmed in Punjab, 22 in Sindh, 22 in Khyber Pakhtunkhwa, 20 in Balochistan. No cases have been reported from Gilgit-Baltistan, Azad Jammu and Kashmir and Islamabad Capital Territory. There were 147 cases of polio in 2019.

The country has also witnessed a new challenge in its fight against the poliovirus with re-emergence of circulating vaccine-derived poliovirus type-2 (cVDPV2) polio cases across the provinces. In 2019, a total of 22 cases of the type-2 virus were reported across the country, according to statistics by the National Emergency Operations Centre of the Pakistan Polio Eradication Programme. The strain afflicted 16 children in Khyber Pakhtunkhwa and one child each in Punjab and Islamabad Capital Territory in 2019. However, the cases of the cVDPV2 strain have jumped to three times of last year’s figure of 22 to 61 cases this year. Until now, Khyber Pakhtunkhwa has reported 42 cases of cVDPV2; Sindh seven cases; Punjab 12 and Balochistan one case.

The polio vaccination campaign’s target was to vaccinate over 20 million children in Punjab, according to a spokesperson for the Pakistan Polio Eradication Programme in the province. The virus is spreading to major cities due to a prolonged gap in the anti-polio campaign when it was suspended earlier due to the coronavirus pandemic, the spokesperson explained. A monthly anti-polio drive would help stop the spread of the virus in the province, the spokesperson added.

The polio vaccination campaign began in all 29 districts of Sindh with a total target population of 9.14 million children under 5 years of age out of which more than 2.2 million children reside in Karachi. More than 50,000 polio workers have been deployed in the province for a house to house vaccination while 5000 personnel from law enforcement agencies provided security cover for the campaign.

In Khyber Pakhtunkhwa, 28,528 vaccination teams began administering of polio vaccine to about 6.5 million children below the age of five years in all districts. Health officials will also try to reach 200,000 children who were not given these drops after their parents refused in last month’s campaign.

Chief Secretary Dr Kazim Niaz said it was the first time in six months that a full-fledged vaccination campaign has been launched in the province. The vaccination teams included 1,091 transit teams, 1,864 fixed teams and 163 roaming teams.

In Balochistan, a team of 10,585 vaccinators began administering polio drops to more than 2.5 million children below the age of five years in all 33 districts of the province.

The coordinator of the Emergency Operation Centre (EOC), Balochistan, Rashid Razzaq, has said at least 8,988 mobile teams would go door-to-door to administer polio drops to children. Around 941 teams of vaccinators would be deployed at camps in cities and 594 teams would be deployed at the province’s borders. Razzaq said adequate security arrangements had been made for the vaccinators. Personnel of police, Levies force and Frontier Corps (FC) would be deployed to protect the polio workers. Religious leaders would help the vaccinators in persuading parents to get their children vaccinated, he added.

In Azad Jammu and Kashmir, 2,615 mobile and 422 stationary teams of vaccinators administered drops to a target population of 669,448 children in 220 union councils across the state. The team members were provided personal protective gear to protect themselves from COVID, officials said. Vaccination teams have also been deployed at the entry points to administer drops to all children entering the AJK territory over the next five days, according to Chief Secretary Dr Shehzad Bangash.

Officials said the pandemic had delayed the polio eradication campaign but the vaccination drive would now be conducted every month. Third-party monitoring was being used to ensure transparency and efficacy of the drive.