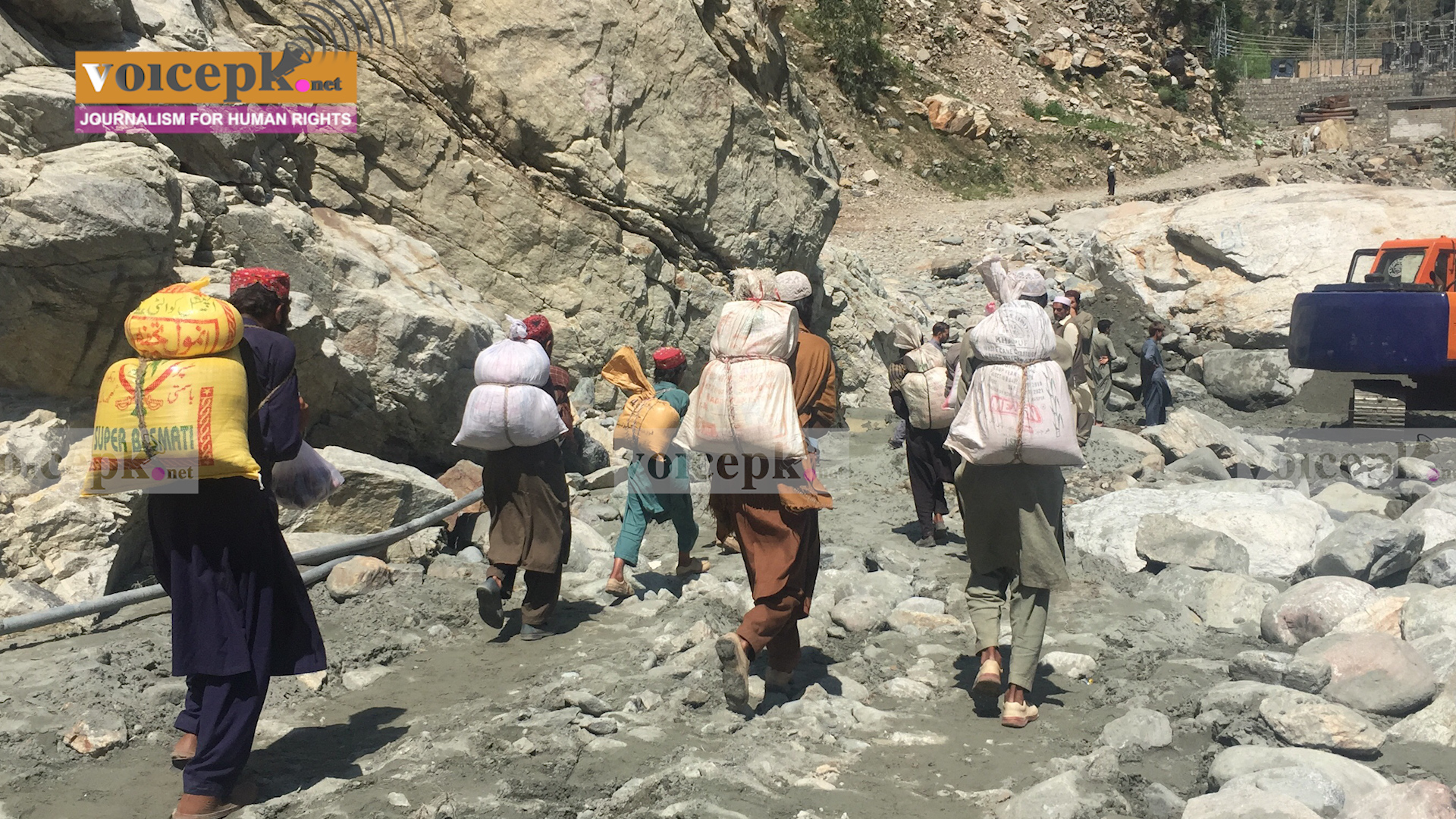 Tired of the neglect that they have experienced from the government, the residents of Dubair valley recently took to the Karakoram highway against the delay in the repair work of the roads washed away in the recent flood. 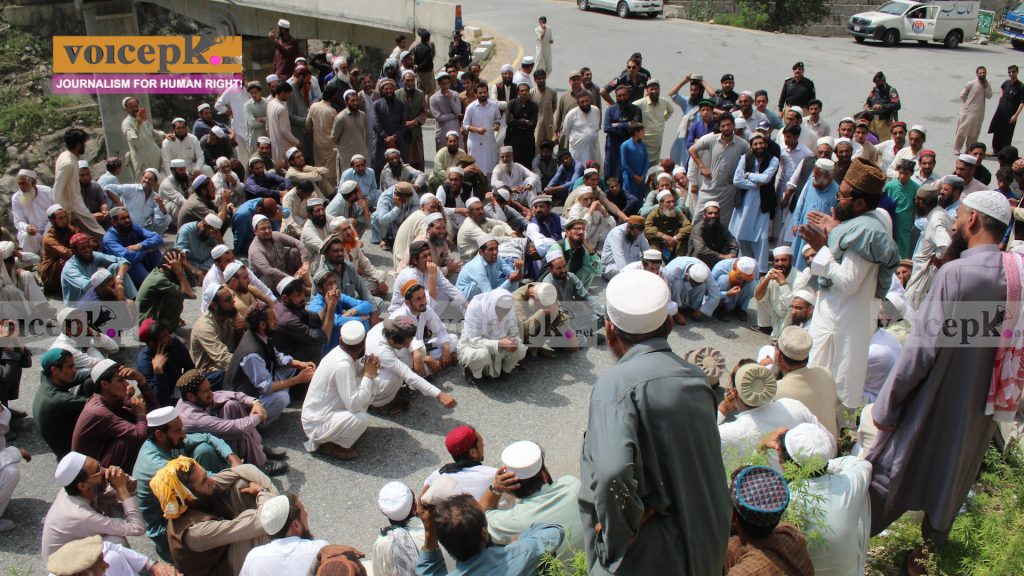 They blocked the Karakoram highway for hours demanding rehabilitation of the road, bridges, and mini power stations.

The protest was called by the Ulema Council, led by its Ameer Said Umar Mir Akbar.

Said Umar said that it was the third week since the road from Ranolia to Neri Dara had been blocked which forced them to take patients to the hospitals and for carrying things on their shoulders and walking for hours.

“Our MPA has failed miserably,” he says. “He did not even visit his village and constituency after the flood destruction and over the phone told us that the CM was not giving him any time. We demand the immediately rehabilitation of roads and bridges on an emergency basis so that our lives may continue and we stop being at a standstill,” He said.

Maulana Azam says that the government must immediately declare the Kohistan area as being disaster struck as it has declared Swat and other districts and start relief and rehabilitation work on an emergency basis.

“One night I saw a torchlight near my house, and when i inquired, I found out that a couple of men and four women were taking a patient for emergency treatment,” he said.

To quell the anger, Deputy Commissioner of Lower Kohistan, Khalid Khan arrived at the protest site and held negotiations with the protestors assuring them that rehabilitation work would be expedited and roads would be reopened very soon.

He also assured that he would tackle the issue of a declared disaster emergency in Kohistan. But for area residents, this seems like a lip service.

Every morning, very early, Hijab starts his journey from his house in Neri Dara, Dubair Bala all the way to Ranolia. It is a two day walk, but he must go as he has shifted his one year old daughter Safia to a hospital in Ranolia for medical examination. A friend’s house serves as a stopover for the night. Now he is on his way back, after he has bought the medicine from the private hospital.

“This time my journey will take even more time because the way back is upwards and pedestrian routes have been washed away in the floods. We have had to come through the mountains,” Hijab tells Voicepk.net, pleading for the that the Prime Minister should look into the matter.

In the recent torrential rain and flash floods for a second time since 2010 , Dubair valley of Lower Kohistan and Kandia tehsil of Upper Kohistan has been absolutely destroyed as a 23 kilometer road in Dubair valley, as well as a 50 kilometer stretch of road in Kandia tehsil has been washed away. So have suspension bridges, mini-hydro power stations, and watermills.

“It has been very hard for all of us because there is no food in our house,” says another resident Zahid Kathana. “I especially came out to get medicine for my son, and now I am buying flour and sugar as well as we are all out of supplies.”

With the flash floods, at least 11 irrigation channels were damaged, along with 12 bridges, seven roads, 11 water channels, and at least 100 houses destroyed across the district. Three people reportedly died.

The Deputy Commissioner of Lower Kohistan, Khalid Khan tells Voicepk.net that two areas in his premises Kayal and Dubair valley were badly affected in the flash flood where 90 percent of main road stretches were simply washed away. He says, work on the rehabilitation of the roads has begun but will take time.

since the devastating earthquake that took place on October 8, 2005 Kohistan, Shangla, and surrounding districts have gone through several natural disasters at various times. Yet despite the formation of national and provincial disaster management authorities, the government has seemingly failed in providing quick response to citizens and provide them with relief and begin in the restoration of routes.

There are two executing departments in the district: the Construction and Works Department and the Tehsil Municipal Administration but the government does not provide them with emergency funds on time, while these departments lack heavy machinery with which roads are cleared particularly after landslides, or even snowfall.

Zahoor, another resident of Dubair Shelkai, reached Ranolia Bazaar after having to climb down the steep mountains taking around eight hours. Now he has to go back home with his food supplies, and has tying a bag of flour and sugar around his body with a rope so he can climb back up easily.

“We have no ration and medication at home; outside we have no roads to travel on,” he says. “These floods have pushed us back into the stone ages.”

“I wonder how the Khyber Pakhtunkhwa government has not declared this a disaster emergency in Kohistan,” says social activist Malak Asad Khan adding that around 40,000 people from the four union councils of Ranolia, Dubair Khas, Dubair Pine, and Dubair Bala have been badly affected.

“Food shortage arose in these villages, but it was not like the government did anything to help,” he said. “A bag of flour cost them Rs6000 along with extra labor charges who brought them home from Ranolia.”

Meanwhile, roads in Upper Kohistan’s Kandia area have been closed since the last flood happened, as the major and link roads have been completely damaged, pushing the local people back into their houses.

Hafeez Ur Rehman, a local resident in Kandia, says that Kandia tehsil had been affected many times by floods and torrential rains during 2010, 2011, 2016, and now 2020 but still the government did not use a single penny on Kandia’s rehabilitation.

“There are neither health facilities nor infrastructure here, ever since the first time things were destroyed by a flood in 2010,” he says. “We walk for hours daily to bring food and other essentials from Thoti carrying them on our shoulders, while the government does not care the slightest about our issues. He added that they must face the worst circumstances when patients have to be transported to hospitals in Dassu, or if there is a medical emergency.

Aziz Ur Rehman, another local also says that they were always facing a food shortage as the main road from Thoti to Gabral had been washed away and its repair would take months.

Details shared by DC Upper Kohistan, Arif Khan Yousafzai, mentioned that the floods took the lives of seven people along with nine cows and 15 goats, while washing away 86 houses, six government structures, and suspension bridges Jalkot and Gabbar nullah.

Benazir Bhutto Shaheed was given a throne on a platter. This throne!

Textile and garment industry workers from Karachi have threatened to stage a sit-in in front of the Sindh Assembly if their "sweatshop-like" working conditions are not improved.

Peshawar accounts for half of Khyber Pakhtunkhwa's total #Covid_19 fatalities, and has the highest daily positivity rate (11.4%) in the country.

#UMT Students protesting against on campus exams brutalized by Punjab Police.
Some students have been hospitalized while there are reports of female students having been manhandled by the police personnel.
#PoliceAttackedStudents

Students are gathering outside UMT to protest against Ghunda Gardi of Punjab Police which baton charged students. Some students including president @PSCLahore @ZubairSiddiuqui are critically injured and have been taken to ICU #PoliceAttackedStudents #StudentsKoInsafDo