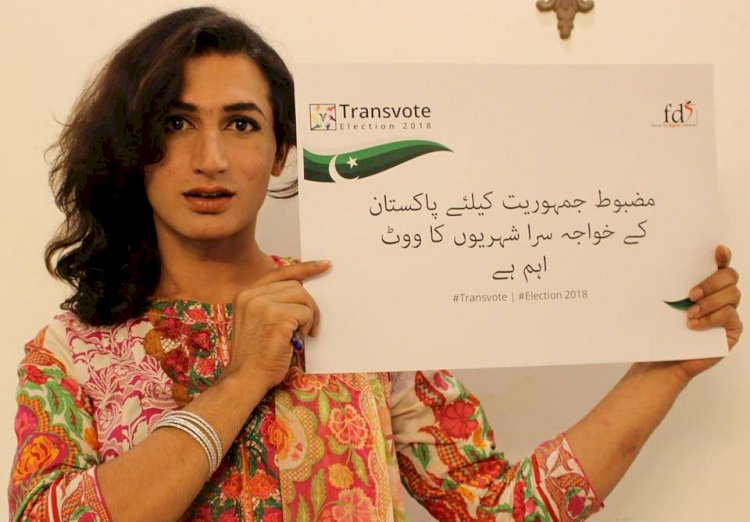 Julie Khan, a trans rights activist was arrested by the Islamabad police on August 10th and is now being kept in Rawalpindi’s Adiala jail. Julie’s interview clips for a multimedia platform went viral earlier this year where she made waves with her bold statements.

According to her sister, Julie was apprehended by policemen who barged into their house on Monday evening.”We were busy watching TV and Julie went out to smoke a cigarette; I heard loud noises,” she said. “I saw that the police had barged into our house. They pushed Julie around and dragged her away.”

Subsequently an FIR was registered against Julie in the Gulehra Sharif Police Station, Islamabad by Lubna, a fellow transwoman on the 16th of July, 2020. Lubna claimed in the FIR that a group of people led by Julie had barged into her house without cause and attacked her with knives.

Following the incident, Lubna went through a medico-legal exam to prove her injuries and launched legal proceedings against Julie and her friends; this FIR led to Julie’s eventual arrest.

Julie’s arrest has caused an uproar on social media with rights groups and ordinary citizens calling the case against her ‘fabricated’ and demanding her immediate release. In an exclusive interview given to Voicepk.net Hassaan Khan Niazi, Julie’s lawyer said that the FIR was mala fide, adding that it was a pressure tactic aimed at silencing Julie.

“Julie has been a vocal critic of the sex work racket being run by several powerful transgender gurus. One of those gurus Najma wanted Julie to become her Chaila (disciple), but Julie refused,” says Advocate Hassaan Khan Niazi. “Najma responded by storming Julie’s house and beating her up. After the incident, Julie and her friend Rozy registered an FIR against Guru Najma and her cronies. Right after the FIR was filed, Islamabad police arrested Najma and Nanhi, the two main culprits behind the brutal attack on Julie and Rozy.”

Both Najma and Nanhi were released on bail a few days after their initial arrest. “As soon as they came out, they sent some people to teach Rozy and Julie a lesson. Julie and Rozy were beaten up again, and a fabricated FIR was registered against them,” he explained .

A close friend of Julie, on condition of anonymity, told Voicepk.net, “As a human being I have never known Julie to be violent. It is not common for the transgender community to involve the police in internal disputes. But Julie is a vocal critic of “certain” prevalent tendencies in the community, and some people felt that she had crossed a red line. She is being punished for that”.

Friends, supporters and allies of Julie allege that the Islamabad police acted under pressure from powerful NGOs operating from the highest corridors of power.

“Julie did not abscond. She never left her house. She was even in constant contact with the police for a month after the FIR was registered. Officials assured her that the case would not be persued. Her arrest was the result of pressure exerted by power groups associated with some officials of the human rights ministry”, claimed Hassan Khan Niazi.

But official sources contend Hassan Khan Niazi’s view, claiming that once an FIR is formally registered the police have no choice but to act. Well-placed sources in the Islamabad police said that “For a month we pleaded with her to post bail, but she didn’t. We had no other choice but to act.”

The police have now launched an extensive investigation into the entire episode. “We have eyewitness accounts from the other group claiming that Julie was present at the scene at the time of the attack on Lubna. But as of now, we have not received any concrete circumstantial evidence which can corroborate the witness’s testimonies”, says an official in the Islamabad police on condition of anonymity.

Meanwhile, Hassan Niazi, Julie’s lawyer, has filed a bail plea on her behalf. She is expected to get bail by Monday.

Gender rights groups have strongly condemned the arrest despite the circumstances and have called for her immediate release.