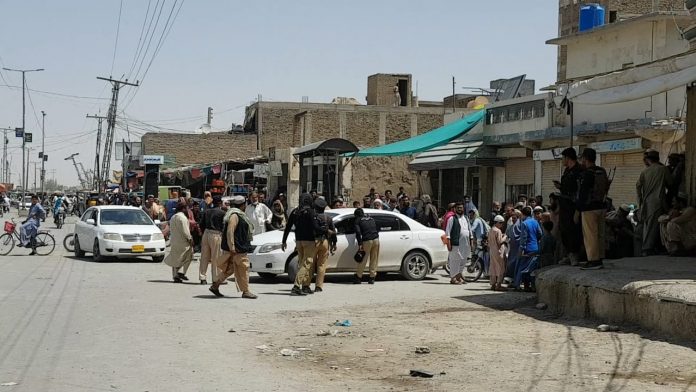 Five people were martyred due to an explosion at Chaman, a major city on the Pakistan Afghanistan border, Monday morning. The explosion took place on the Mall Road, one of the cardinal roads in the city. An initial investigation by the police has revealed that the bomb was fitted inside a motorcycle.

“Instantly, after the blast, we declared an emergency at the hospital, and our staff was very quick to respond as well. Out of the twenty-two injured, five were critically injured. We have sent them to Quetta for further treatment. I am satisfied with the overall response of my hospital,” says Dr. Abdul Malik.

Zakaullah Durrani, Assistant Commissioner Chaman, told VoicePk.net that they have ruled out the possibility of a suicide bombing. It is clear that the bomb was remotely controlled. “The bomb was planted in a bike in front of the Nida Shopping center on Mall Road. Following the blast, security forces quickly cordoned off the area. At the time of the blast, an ANF vehicle present on the scene. We believe that this vehicle might have been the main target of the blast,” says a weary Zakaullah.

The Tehreek-ul-Ahrar, an offshoot of the Tehreek-e-Taliban Pakistan (TTP), has claimed responsibility of the blast.

The explosion devastated nearby shops and commercial buildings. The Central Union for Traders Chaman has called on the government to improve the security of the area. “We demand that the government share the burden of the monetary losses the trader community faced as a result of this explosion,” says Habibullah, a union representative.

While investigators are still at work, the explosion has raised concerns regarding the country’s security situation, especially with the 14th August celebration only three days away.