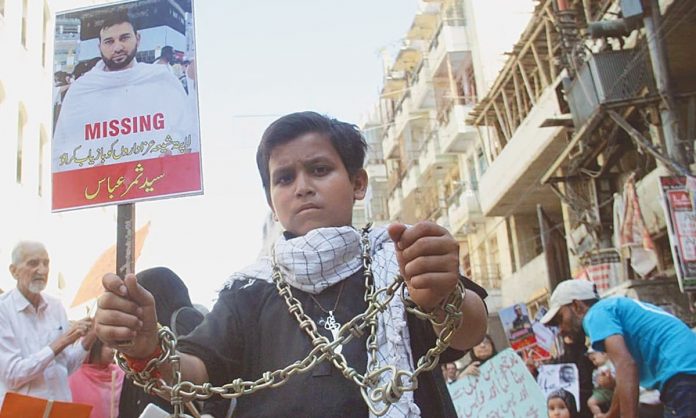 On Sunday night, July 14, 2020, Muhammad Amin was dragged out of his house in Shah Faisal Colony of Karachi, Sindh, by a group of men and was never seen since.

His family says the abductors were clad in civilian clothes and in Rangers’ uniforms and they told his family that he was being taken in for questioning, and would be sent back home the following day. Now it has been at least 12 days since, and the family fears that Amin is being held against his will and tortured in police custody.

“Around three in the morning we heard a knock on the door,” said Saira Bano, Muhammad Amin’s sister. “They said they were Rangers and they were going to search the house. When we opened the door, we saw they were about 15 to 20 men in uniform. Only two or three of them were in civilian clothes.”

She says they checked his CNIC and his cellphone. They asked him if he had any other cellphones or SIMs, after which they took him away.

“Then they brought Amin back about 10 minutes later, and he voluntarily informed them that he owned a licensed gun,” she said. “He showed them the gun and his license, after which they took him away with the gun, the license, his phone, and CNIC, and we have not seen him since.”

“I do not take my eyes off the door in case I miss even a glimpse of my son,” lamented Amin’s mother. “But I didn’t see him today… I don’t know what to do… I just hope they are not torturing him, and he is safe.”

Saira has already reported the forced abduction of her brother on the Citizens Portal and was informed that her complaint has been forwarded to IG Sindh who would reach out to her soon. She then took her complaint to the relevant police station but the local SHO sent her back, saying that if an intelligence agency had taken away her brother, the police did not have the jurisdiction to register her complaint.

“Amin is a student and is also working,” says Saira. “He is a member of the Progressive Youth Alliance which is a student wing of the International Marxist Tendency movement,” she says. Her brother was a model citizen and advocated only for the betterment of society.

Mohammad Amin is among the several missing persons for whom a protest was organized by various groups including Progressive Youth Alliance, the Pashtun Tahaffuz Movement (PTM), the Jeay Sindh Qaum Parast Party (JSQM), lawyers and most importantly the families of disappeared persons. The protest was carried out in front of the Karachi Press Club on Monday, July 20.

PTM Sindh organizer Noorullah Tareen demanded to know what was the purpose of the courts served if those charged of crimes were not presented before a magistrate.

“They take away people in the dead of night, without giving a word to their worried parents, siblings, wives, and children where they are taking the accused or for what crimes,” he said. “They should just dismiss our judges, and let our security forces have free reign of our institutions and enact justice.”

Muhammad Amin’s family has submitted an appeal in the Sindh High Court. They fear that Amin may be charged for a fake case.

Meanwhile, retired Justice Majida Rizvi, who is the chairperson of the Sindh Human Rights Commission, stated that HRCP continues to receive missing person reports in droves, and is working with the relevant authorities to demand their immediate release.