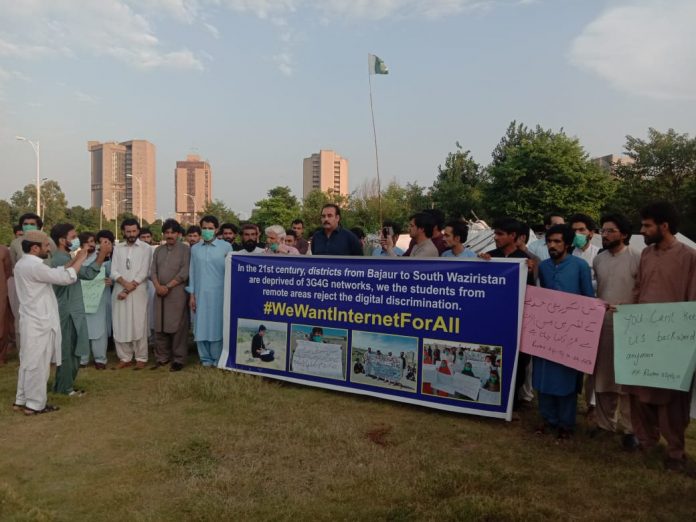 Students from Gilgit Baltistan and former-FATA took to the National Press Club to protest for the restoration of mobile internet data services in their areas. They demanded internet services so that they could attend online classes efficiently, as universities remain closed due to the pandemic.

The protesters demanded the authorities to immediately provide 3G and 4G services to the area … so that they could continue their education and not lag behind.

Senator Farhatullah Babar said that shutting down 3G and 4G services in Gilgit Baltistan, former FATA, and South Waziristan on the pretext of national security was unjustified. However, he urged the students not to ask authorities to promote them to next semester/classes without examinations.

MNA Ali Wazir also addressed the protesters and extended his full support to their demands.

Since the imposition of lockdown in March, students from across the country have been protesting for adequate provision of internet services so that they can continue with their online classes.

According to Pakistan Telecommunication Authority (PTA), only 37 percent of the country’s population has access to 3G/4G internet services.

After the ministry’s response, the court asked the petitioner to submit the reply regarding the jurisdiction of this court and adjourned the hearing indefinitely.

In a TV talk show last week, Federal Minister for Information and Technology Amin ul Haque assured that the government is trying to provide 3G/4G internet service to unserved areas of the country including Gilgit Baltistan (GB), Azad Kashmir and former-FATA through Universal Service Fund.