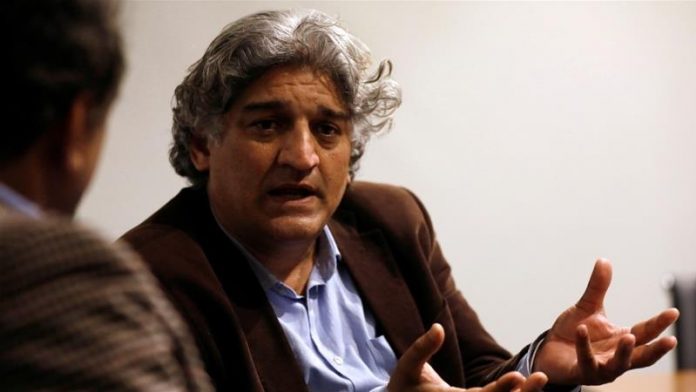 Senior journalist Matiullah Jan appeared in the Supreme Court today for the hearing of a suo moto case against him. Matiullah was abducted on Tuesday morning but was recovered later at night after a period of 12 hours, during which there was complete silence on behalf of the authorities, with no possible explanation of where he might be.

He was accompanied by a large number of journalists and lawyers. Talking to reporters outside the court, Jan said that on one side people are not allowed to speak and on the other hand those who dare to speak are being served contempt of court notices.

At the start of the hearing, the bench comprising of the Chief Justice, Justice Mushir Alam and Justice Ijazul Ahsan inquired about yesterday’s incident from the attorney general. The AG told the court that the government had initiated immediate proceedings in the case.

The Chief Justice expressed displeasure over Matiullah’s statement not being recorded after his recovery on Tuesday night, and ordered the police to record one at once. The apex court directed the DIG police to submit a report regarding the journalist’s abduction within two weeks.

In court, Jan argued that his kidnapping was directly related to the contempt of court case.

Matiullah requested the bench to give him some time to submit his written reply in the suo moto case. The court adjourned the case for two weeks.

Speaking to Voicepk.net, senior journalist Hamid Mir said that the civilian government had nothing to do with the abduction of Matiullah Jan.

“This case is a challenge for this government. There is an impression about this government that it is a proxy government with someone else working behind and while others make the ‘mistake’ the government gets the blame,” he said.

Justice Athar Minallah questioned what impression the public would get if they saw people roaming around freely in police uniforms. He said that the incident was meant to intimidate others. The court ordered the police to investigate the matter transparently.

The incident was also discussed in the Senate Standing Committee on Human Rights. Inspector General Islamabad Police briefed the committee about developments in the case. He said that a special investigation team had been constituted to probe the incident.

Federal Minister for Human Rights, Shireen Mazari called the incident an “embarrassment to the government”. She assured that the government would soon table a Journalists’ Protection Bill in the parliament.

She said that social media needs to be controlled because people were facing ‘character assassinations’ there.

PPP senator Sherry Rehman chided the government over the abduction. She said that this “nonsense” of Twitter condemnations by the ministers needed to be stopped.

“Don’t take appeals on twitter to condemn it; you have to either act or resign,” she said.