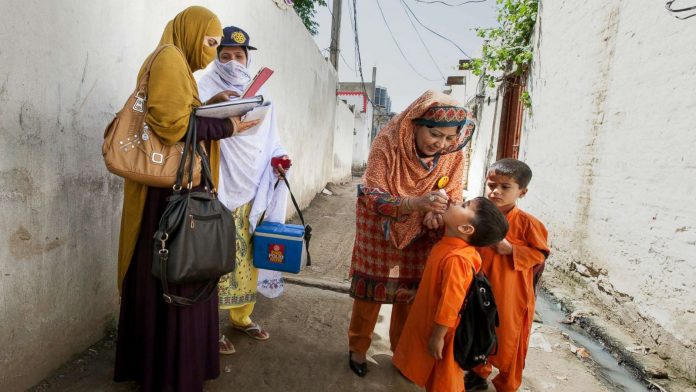 This year, Khyber Pakhtunkhwa’s southern districts reported 21 cases of wild poliovirus (WPV) or poliovirus type 1. Twelve children from Lakki Marwat, four from Tank, two from Bannu, two from South Waziristan and one from Karak were reported to have contracted the disease.

Three year old Shahidullah of Santwai in Shikari Dheri district of South Waziristan was handicapped by polio. His parents claim that Shahidullah had received polio vaccine drops seven times, but due to lack of basic health facilities and the gap in routine immunization due to the coronavirus pandemic, Shahidullah missed this year’s immunization and became prey to polio.

South Waziristan District Health Officer (DHO), Wali Rehman, confirmed that the routine polio immunization campaign could not go ahead due to COVID-19. But he assured that the drive would jumpstart in South Waziristan once again on July 20.

Dr. Abdul Basit, the Provincial Coordinator for the Emergency Operation Center, also confirmed that the anti-polio drive, which remained suspended since the past four months, is set to resume in the southern districts of the province on July 20, which will then expand to the rest of the region in its second phase.

Meanwhile, Pakistan’s anti-polio drive was recently restructured in order to address the gaps in yearly routine immunization and mitigate the disease, as a result of which scores of polio workers were laid off. Polio workers in Peshawar, Bajwar, and district Khyber took to the streets to protest these mass lay-offs.

Now under new health guidelines issued by the government on account of the spread of COVID-19 in the country, polio workers have been directed to follow SOPs in order to protect themselves as well as the children receiving vaccine drops from contracting the coronavirus disease.

“Polio workers will be instructed to wear masks and gloves, and to carry a hand sanitizer with them. Teams will be screened before they set out on field,” explained Dr. Abdul Basit.

In 2018, KP reported two polio cases while former FATA reported six. In 2019, these numbers increased with 46 reported in the province and 11 from the tribal districts. Within six months since the turn of 2020, South Waziristan alone has reported 21 cases so far, which raises questions as to the performance of the institutions involved in carrying out Pakistan’s anti-polio drives.