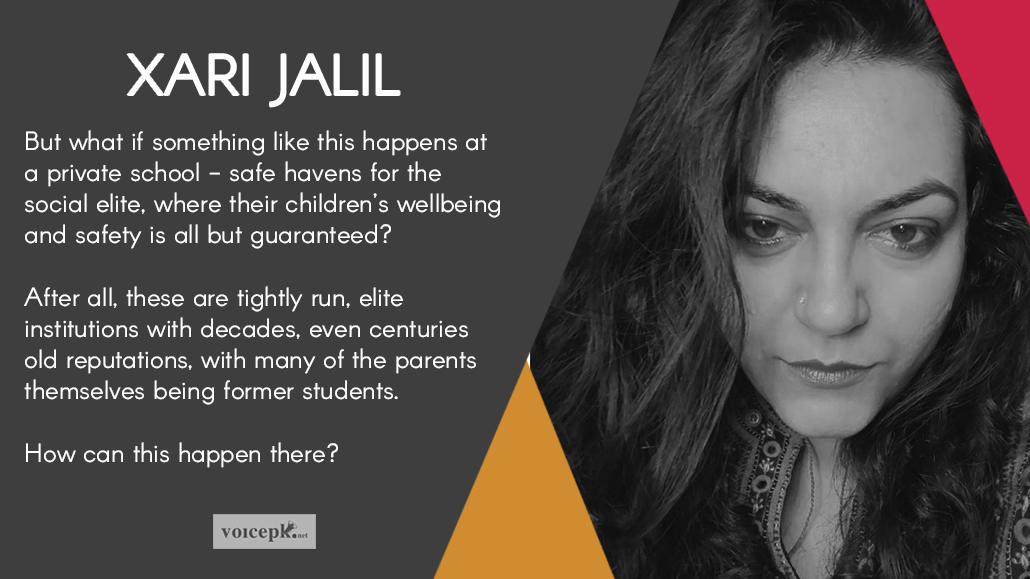 Spotlight, the 2015 Academy Award winning motion picture, brought to global attention the Catholic Archdiocese of Boston sex abuse scandal of 2002. The film was based on factual events, showing how a group of reporters unearthed a decades-long institutional culture of silence that allowed for continued occurrence of heinous abuses against innocent children, by trusted adults in positions of power.

A similar comparison can be made of the madrassahs in Pakistan – where children are frequently abused, physically and sexually, by their teachers – or government run educational institutions, such as the Balochistan University sexual harassment case where students were sexually abused and filmed.

There are several others which may or may not have made it to the press. But then, such is the reputation of madrassahs and government schools. They are no place for the society’s ‘respectables’.

But what if something like this happens at a private school, safe havens for the social elite, where their children’s wellbeing and safety is all but guaranteed? After all, they are tightly run, elite institutions with decades, even centuries old reputations, with many of the parents themselves being former students. How can this happen there?

When news broke of how some teachers from one of the branches of Lahore Grammar School had been harassing students since years, the shock and outrage spread like wildfire. And besides the news itself, the way it broke was even more disgraceful: the victims had to finally speak out on social media, along with damning evidence, since the school administration allegedly ignored their repeated complaints, and in some cases, even shamed the girls into keeping quiet.

The claims were corroborated by other students and very soon these message threads became viral. Students from other schools joined in the conversation as well to share their own experiences, and a whole can of worms was pried open, revealing a culture of silence prevalent in and perpetuated by, almost all top, “elite” private schools elite schools. It revealed the extent to which the upper echelons – the so called educated and privileged class of society – would go to cover up their own failings. After all, this is a class that continues to, albeit silently, endorse and perpetuate several other regressive and often criminal social ills, like the practice of dowry, young age marriages, underage domestic labor, and reinforcement of typical gender roles.

Whatever happened in LGS has also been happening in coaching or tuition centers that private school students attend. Many of them have crossed paths by the same school teachers who were accused of harassment.

By upholding the status quo, these schools have ended up in protecting the criminal, because he or she is ‘one of their own’. Subsequently the issue is hushed up.

A former student revealed that the school was known for its discipline and its regimental policies, possibly leading to this culture of silence; protecting the image to such an extent that basic rights are trampled.

One other chilling piece of information by none other than a school teacher herself revealed that a gang of boys from one of Lahore’s poshest and oldest schools – alma mater to many renowned politicians and bureaucrats, our current Prime Minister included – regularly abused girls, made videos and then posted them online for blackmail, or shared them with each other. The teacher said that one of the affected girls had been close to committing suicide because of this.

Yet this kind of behavior has gone unchecked for too long, only because of the tightly guarded school system which itself runs on outdated social mores.

The closed exclusivity of the elite social class has led to a culture of silence prevalent in their schools. At the same time, there is the stigma attached to the mixing of sexes in schools and on the whole in society resulting in such behavior among the youth as it builds frustration, and it ends up in making young people vulnerable to become groomed by predators in positions of authority and trust.

One can only hope that these revelations would cause a serious reevaluation of school policy and an overhaul of the educational system in general. Because as long as the status quo is upheld and exclusivity or closed-circle attitudes are kept in place, such abuses of power and authority will continue to happen.