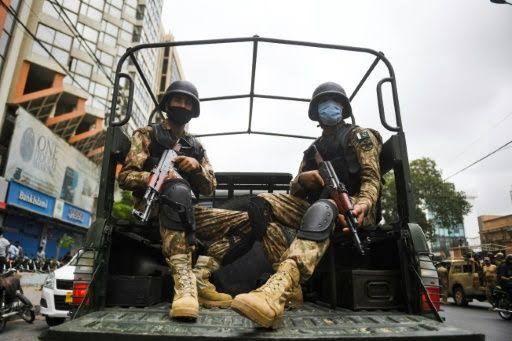 The valor shown by the security guards and the timely response from the Sindh police ended up in not only saving the Pakistan Stock Exchange (PSX) from a large scale terrorist attack and hostage situation, it also helped to prevent a potential economic crisis from occurring.

According to details, on Monday, June 29 four terrorists arrived at the main entrance of the PSX in a sedan car. There was a security check post beside the entrance of the building. But before the guards assessed the situation and reacted, the attackers opened fire on the picket, killing two guards on the spot.

The gunshots alerted the security guards and police officials positioned inside the building. They immediately took their positions and started retaliatory firing that killed two of the terrorists. The remaining two then resorted to indiscriminate firing and tried to take refuge behind a wall. After a brief encounter, they were also shot and killed by the police and security guards. The entire operation was reportedly done within eight minutes.

Traders and officials of the PSX termed the attack as an attempt to destabilize the country.

Director PSX Ahmed Chinoy told Voicepk.net that because China has invested a huge amount of money in the stock exchange, the terrorists targeted it. The terrorists were from the Balochistan Liberation Army (BLA) a banned outfit that claimed the responsibility of the attack. In addition, security officials say, the attack could not have been carried out without the help of RAW, India’s intelligence agency.

Director General Sindh Rangers Major General Omer Bukhari said that the attack was a foreign conspiracy against Pakistan. He said that the PSX attack and the one on the Chinese consulate were similar in nature.

Karachi Police Chief Gulam Nabi Memon also hinted at the involvement of ‘foreign hands’ in the attack. He said that it was relieving that the security officials were ready to thwart any potential terrorist attacks.

Eminent businessman Aqeel Karim Dhedhi said that there had been a threat of a terrorist attack in Pakistan since the Sino-India standoff at Ladakh. He also alleged that the terrorists had come from beyond the border.

Heavy ammunition and food items were recovered from the bodies of the attackers.

Meanwhile the director of a private security company, Tahir Naqvi said that the terrorists had a plan to make people hostage. He said that if they had managed to enter into the main compound or the PSX trading hall, then the country’s economy would have suffered a massive blow.