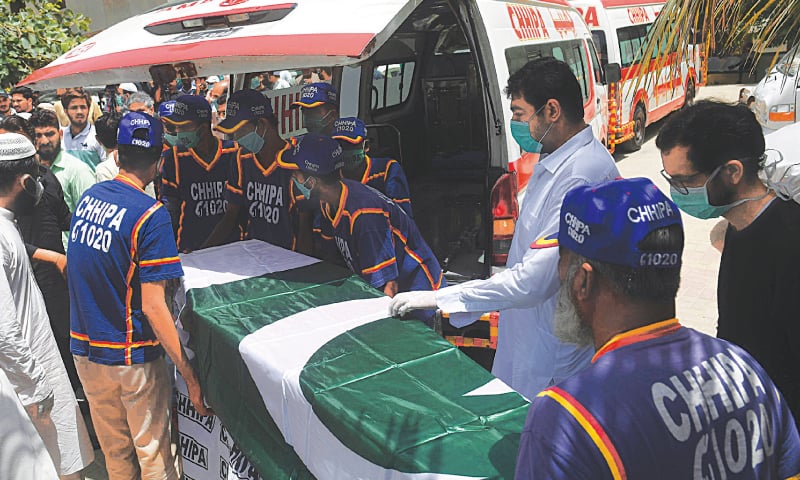 KARACHI: Arif Iqbal, a resident of Lahore, is among the several unfortunate Pakistanis who lost their loved ones in the Pakistan International Airlines (PIA) Airbus A320 plane crash on May 22, 2020. The plane had crash-landed in a residential area near the Jinnah International Airport claiming the lives of 97 passengers and a yet-indeterminable number of residents at the crash site.

Iqbal’s wife, son and two children were traveling to Karachi from Lahore via the ill-fated Flight PK8303. It has now been nearly two weeks since their demise, but Iqbal has yet to receive his family’s remains in order to perform the funeral rites. DNA identification is being carried out at a sluggish pace, and aggrieved families are being made to run from department to department without even a sliver of information or assurance to be gained.

“From commission to the assistant commissioner, no one has any clue about the procedures or systems (for identifying and handing over bodies to families). They have only offered their condolences and assurances so far,” Iqbal claimed. “The NDMA is performing postmortem examinations and acquiring DNA samples a second time nearly four days after Eid. What were they doing all this time? They should have followed proper SOPs and taken samples as soon as the bodies were wheeled in, and now the DNA test reports are coming out excruciatingly slow.”

Iqbal’s brother-in-law, says that the complete absence of information and communication between the authorities was terrible, stating that not a single individual had any answers as to when the bodies would be identified and handed over to the grieving families, or why the process was taking so long. Iqbal’s grief like that of so many others is being exacerbated by the lack of transparency and painfully long delays in identifying their departed loved ones.

Saeed Ghani, the Sindh Minister for Labour, Education, and Literacy, and Human Resources offering his condolences to the affected families stated that a few bodies were identified and immediately surrendered to their respective families, however, many could not be identified without DNA testing which can take up to 21 days to produce correct results.

“There were cases where it turned out that a body had been identified and was going to be turned over until another group of claimants arrived,” he said. “It became necessary to withhold the body until DNA testing could be conducted to correctly identify the deceased individual. The government cannot possibly hand over the deceased persons without conclusive DNA evidence,” he said

“We had correctly identified one Ataullah, who was previously believed to have been Waqas Younus. We contacted both families to clear the confusion, but Waqas Younus’ family declined our request as they demanded a DNA test first,” he said. “In such incidents, DNA testing is the only possible method of correctly identifying bodies”, he had added.

Police and PIA authorities have claimed that the reports are finally coming in and bodies will be promptly handed over after confirmation. So far, four bodies have been correctly identified among whom was a PIA air-hostess named Amna. Sindh police have stated that 56 bodies were received by the Edhi morgue while Chhipa morgue received 46 bodies related to the crash.

DNA reports for the remaining deceased have yet to come in, leaving Arif Iqbal and many others to bear a longer and more torturous wait.