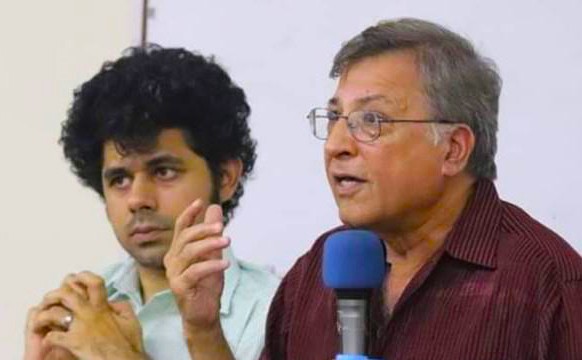 The gash that liberal society received of educationist Junaid Hafeez’s arrest over alleged blasphemy, is still as fresh as it was on the first day. Hafeez, a 34 year old Fulbright scholar, who was teaching at the Bahauddin Zakariya University (BZU) in Multan before being arrested in March 2013 is currently languishing in Multan Central Jail. His case hangs over his head like a sword of Damocles.

But Hafeez is not the only one who has been targeted for their open mindedness or critical thinking.

Despite many national and international organisations including Human Rights Commission of Pakistan (HRCP), Progressive Academic Collective (PAC), Human Rights Watch (HRW), Amnesty International (AI), demanding safety and freedom for critical thinkers or scholars in Pakistan, the government is yet to give any serious response to the issue.

Only a couple of weeks ago, two other senior academics, Dr Rasheed Soomro and Dr. Arfana Mallah faced this trend of “enforced silencing”. A case was filed against Dr Soomro over alleged charges of blasphemy and he was arrested, while Dr Arfana was threatened of having a case lodged against her too. She has been facing serious threats in Sindh since a very long time due to her political views.

This week again, some others were targeted.

Out For A Third Time

One of them is the academic, Dr Ammar Ali Jan who has himself been sacked for a third time, from teaching. Dr Jan – who holds a Bachelors in Political Science from the University of Texas and a PhD in History from the University of Cambridge, began teaching in 2017. He had moved to Pakistan right after his degrees and started out as a lecturer at the Government College University (GCU), Lahore. But due to ‘unknown external pressure’, he was shown the door by the administration in June the same year.

Dr. Ammar Jan also taught at the University of Punjab (PU) but right after the Pashtun Tahafuz Movement (PTM) rally in Lahore he was again fired in April 2018 after being declared a ‘security threat’ to the campus. In those two years since his sudden termination, PU has not called him even once for any disciplinary committee hearing. In fact even his dues have not been given to him.

As a result, many of his PU students had held a demonstration followed by a rally against the university administration to have him reinstated but in vain.

One of the protesting students described Dr Jan as a an instructor who was not only ‘intellectually very good, but also very caring and committed to teaching’.

“This is all just part of a witch hunt going on at the PU campus where those who do critical thinking and are capable of any progressive change are faced with either fascist groups on campus, or are thrown out one way or the other,” he told Voicepk.net. “Though I associate with a progressive outlook, I am unable to air my thoughts publicly because either I will be taken away like Alamgir Wazir or be humiliated and kicked out like they have done with Dr Ammar,” he said.

Now this week, Dr Ammar Jan found out that he could also no longer work at the Forman Christian College & University either. This was announced by him on a series of tweets on Saturday, where he declared that the situation had begun to change after the Students’ Solidarity March where he was accused of being an ‘instigator’ and was charged with sedition. “I felt university administrations should amplify the concerns of the students/teachers rather than mimicking the paranoia of a dysfunctional state. I was wrong, and I was told I either stay silent on the case or leave. I chose the latter option.”

Despite keeping a low profile during all this time, Dr Arfana Mallah chose to stand with him and sent him a solidarity message saying, “They don’t need teachers – they only love preachers.”

I sadly announce that I will no longer be teaching at Forman Christian College. Earlier this year, my contract was changed to visiting faculty from the position of Assistant Professor. Now I wont continue as a visiting lecturer either.

After returning to Pakistan in 2016, was

Tragically globally renowned writer, Mohammed Hanif was next, who also in some tweets announced how he had “just been shown the door by a private University (Habib) where (he) taught a few semesters.

Speaking to Voicepk.net, Professor Jan said that the forces who got him fired do not have a personal problem with him because their actual problem was with his critical thinking. However critical thinking and questioning was the role of an academic in any case. “Research, arguments, debate and questions are now in direct conflict with our society and institutions and since I have been associated with the academia for long enough I am aware of how it works but when a third party starts making the rules then even if you do not cross a red line, it may cross you,” he said.

Arguing his case further, Dr. Jan pointed out that Pakistan’s education system has been consistently decaying over time because of the policies of austerity but not a single senior academic from any public institution has openly resisted or taken a stand.

The Prime Minister of Pakistan, Imran Khan since a very long time has been making an appeal to overseas Pakistanis to come back and serve the country with a promise to welcome them nicely with opportunities, but Dr Jan’s experience tells another story.

But Dr Jan says that those who are planning to return must be mindful that they need to be very strong and tolerant of the petty politics within educational institutions.

“There are way too many hindrances for those who want to make a change through their services because once you come back, you will realize that there are forces outside the educational institutions that are trying to control and pressurize you,” he added. “This country does not seem to value the labour of those who are committed to the cause of bringing progressive changes.”

Previously a young academic from Gilgit-Baltistan (GB), Zaigham Abbas also had to face the wrath of power politics on campus resulting in an unexpected end to his contract after years of association GCU. Zaigham Abbas’s termination was also allegedly made due to his association with progressive political theory and activism. While the GCU administration said that the end of his contract was routine business the department did not require his services anymore due to ‘workload’.

I had the pleasure to teach alongside @ammaralijan at GCU for almost a year. working & organizing alongside Ammar is the most cherished time of my life at @gcuniversitylhr. I remember how Ammar was admired & loved by his students, how his course classes were always full—

Now in two more incidents, renowned nuclear physicist from Massachusetts Institute of Technology (MIT), Dr. Pervez Amirali Hoodhboy’s position at FCCU as the Zohra and ZZ Ahmed Foundation’s distinguished professor has also been reduced to a year-only contract, and journalist and academic, Aima Khosa was also sacked by Beaconhouse National University (BNU) with her entry allegedly banned from campus for her progressive views.

I was hired as visiting faculty at BNU in 2018 to teach political thought. After 2 semesters, I was told that my contract was not being renewed. I went to 2 HODs to find out why I was being abruptly dismissed. I was told that the VC had recieved calls about my political views…

If a teacher of politics does not talk about politics, what else does he or she talk about then, questions Dr Jan. “Such important political questions are discussed globally but it has never hurt any nation according to my knowledge. In fact when academics are threatened and students are abducted from campuses that is what I call ‘dirty politics’ and that is exactly what I have criticized in my classes,” he adds. Dr. Ammar Jan says that he is still ready to become part of a dialogue with anyone on what kind of campuses and spaces are required in the 21st century.

Ammar Sb please come to Karachi. I have also just been shown the door by a private Uni(Habib) where I taught a few semesters. (Not as qualified or committed as you). But I was beginning to like it. Will miss the students https://t.co/kEU8CCrlys

He also pointed out that Pakistan must go towards ending contractual labour because job security was the first thing which gave enough confidence to citizens when the exploitation ends. “Our society cannot better in any way without academic freedom in the true sense,” said Dr Jan. On the other hand there are many academics facing very different kinds of difficulties in Pakistan.

It should be pointed out that Dr Ammar Jan’s evaluation in FCCU, he is described as giving ‘very good performance, with areas of especially noteworthy achievement’, and his behavioral performance section says that “although only with us a short time, Dr. Ammar has already made a huge impact on campus life and beyond. He helped put together an interdisciplinary talk on the scientific, political, socio-economic, and health-related causes and implications of air pollution.”