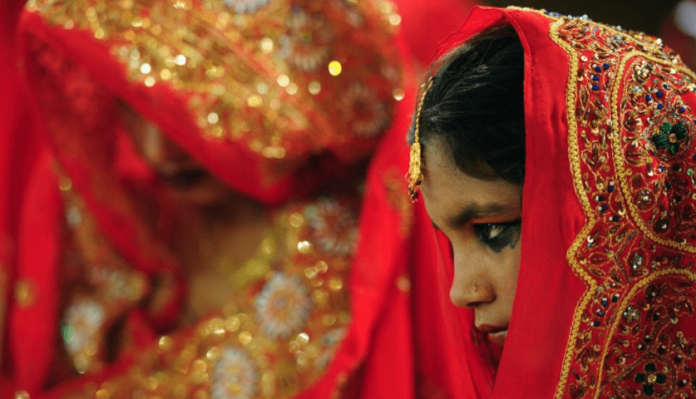 It is rather strange that Pakistani legislature cannot seem to decide what a child is.

In Pakistan, the definition of a child differs, across multiple laws in each of the four provinces. Under labour laws, a child is an individual below the age of 14 years, while under domestic labour laws, the age cap is 15 years. And as per the marriage laws depending on the province, a child could be someone under 16, or under 18 years of age.

Child protection laws, especially the ones for prevention of child marriages, are cosmetic at best, if not downright farcical. For they do not seem to have any effect on underage marriages at all. Their continued prevalence even in this day and age is sad proof that stamping this practice out is not a priority for Pakistan’s institutions.

According to Nida Aly, Executive Director of the AGHS Legal Aid Cell – a pro-bono law firm providing assistance to women, children and minorities – cultural attitudes not only help facilitate child marriages in certain communities, but also play a significant role in favorable legal verdicts for such cases. In Pakistan’s courts, the judge’s personal point of view, rather than the law itself, is the ultimate deciding factor. And that, as Aly states, undoes what child marriage restraint laws set out to do.

According to Shariah law, a girl is considered an adult when she has her first menstruation cycle. Scores of girls have their first period when they are barely 12, even younger, and Aly says there is no shortage of cases where nikah-namas of girls this young are declared legal in courts.

Advocate Ahmar Majeed, a Child Rights Movement activist who has helped draft the Child Marriage Restraint Bills which are currently stuck in limbo in Punjab, Khyber Pakhtunkhwa, Balochistan and Azad Jammu and Kashmir parliaments, says that marriages cannot be dissolved or annulled as there are no laws making it possible to do so.

The union may be declared illegal if one or both of the “married” individuals are minors as per the courts, but the individuals themselves must pursue annulling their nikah. In the event a minor girl seeks to annul her marriage, she must seek a khula. But such an outcome is extremely rare, practically unheard of since child marriages do not involve the disempowered victim’s consent. In fact the girl child would be more vulnerable than a woman could ever be.

Most cases involve minor girls who are coerced, forced, threatened or fooled into agreeing to marry their much older abductors/rapists. And once a nikah nama is signed, it may as well be impossible for the girl to be able to leave her marriage. In the rare instances a child is able to be rescued from a “solemnized” marriage, there are no institutions or even mechanisms in place to protect, facilitate and rehabilitate the victim until they are of age and capable of looking after themselves.

Aly states that the lack of a standard legal definition of a minor is a major obstacle to the implementation of child marriage restraint laws. Federal and provincial laws should all adhere to United Nations charters that define anyone under the age of 18 a minor.

Majeed on the other hand believes this is not enough. Many more amendments to existing laws, such as mandating that only those with a registered identity card (which is only issued when one provides legal certification that they are indeed 18 years old), and empowering child victims to issue complaints against their abductors.