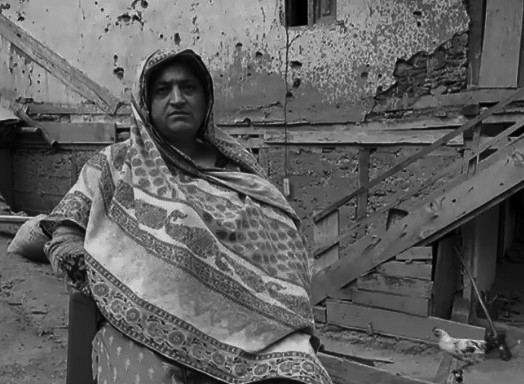 Begum Shah Jaan remembers the day well when her son was shot dead in December 2019. When the shelling took place, her son abandoned his shop and came running towards her, knowing that his mother was ill and would need his support.

The family had already moved into their bunker and was waiting out the firing, and when it seemed to stop for awhile, Shah Jaan’s son Sheikh, his sister Rabia, and a child from their neighborhood Sheheryar, slipped out for some water. As they were returning, suddenly firing began from the front, and right outside the bunker’s entrance, a grenade exploded, emitting smoke and dust in the air, throwing everyone back.


Shah Jaan remembers Rabia lying badly wounded on the ground, crying for help. They were all bathed in blood. There were others from the community taking refuge in the shelter with them. They managed to pull them inside.

This seems like many of the countless stories that Kashmiris who live near the Line of Control (LoC) face in their daily lives. Kashmiris along the LoC have spent the past seven decades in fear amidst the roars of gunfire and explosives from the Indian occupied territory. From Bhimber to Taobat, residents along the LoC have, without exception, borne some sort of human or material loss throughout the entire history of the Kashmir conflict.

Fifty five year old Begum Shah Jaan, is a resident of Leswa (an area adjacent to the Neelum valley – nearly a two hour ride from Kashmir’s capital, Muzaffarabad). During the indiscriminate firing from the Indian side, she lost her son Sheikh. Today she remains the sole elderly guardian of her orphaned grandchildren. At the mention of Sheikh, her eyes well up with tears.

After the firing stopped, the residents called for an ambulance – Sheheryar died even before they could reach the local hospital while Shah Jaan’s son and daughter Rabia and Sheikh, were carried to a hospital in Muzaffarabad. Her son did not make it while her daughter is still under treatment.

“His children are orphaned, they have no one to protect them!” she says quietly, clearly still grieving. “They call for their father…I miss my son too. How can I ever forget?” She sits in the open air, while her house walls behind her are pock marked with marks of firing.

“The government or anyone is not doing anything so I guess we have no choice but to carry on.” Rafique says there is not one military post in the area, from the river to the end. So whatever the Indians fire at, it is meant to just the residents of the area, not the military.

On June 22, 2020, Indians fired in Samahni, a settlement near the LoC on the Pakistani side, killing six people, including three women, while 19 were injured. According to the data issued by the State Disaster Management Authority (SDMA), Indian instigators managed to injure 106 and kill 13 Kashmiris in 2019.

“He was standing right here when it happened,” says Rafique Sheikh, Sheheryar’s grandfather. “He had been coming from some shop nearby, and as he approached the shelter, suddenly there was shelling and it hit him exactly in the center of his feet, completely blowing him up.”

When he got to know that Sheheryar had been killed in the attack, he cannot think of how to digest it even now. “I had only one grandchild – him,” he says. “And what a beautiful child he was.” The old man’s eyes sparkle with fondness in spite of the grief.

“The government or anyone is not doing anything so I guess we have no choice but to carry on.” Rafique says there is not one military post in the area, from the river to the end. So whatever the Indians fire at, it is meant to just the residents of the area, not the military.

“I still have some internal injuries,” says Rabiya. “I am in pain, I cant walk properly. There was a bullet in my legs which was taken out but the one in my back is still there.”There was firing a day before (from when this interview was filmed), she says. Rabiya is suffering from PTSD.

“I am in fear all the time feeling as if the firing could start any minute,” she says. “I don’t go anywhere near the place that gives me such feelings.”