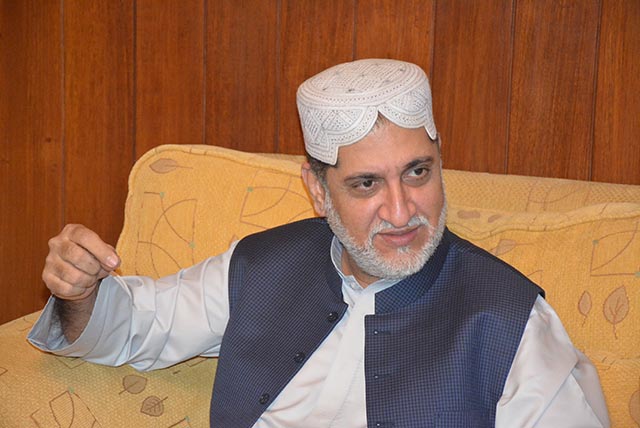 Chairman of the Balochistan National Party (BNP-M), Sardar Akhtar Mengal pulled out with his party’s 4 seats in the National Assembly from the coalition government with the ruling party, Pakistan Tehreek-e-Insaf (PTI).

Now the number of NA members from the ruling party and coalition partners has reduced to 180 after BNP parted ways with PTI while with the inclusion of BNP in the opposition alliance, seats of the opposition party will move upto to 161.

Mengal started his speech by pointing out that all the governments, including the current government, have always claimed that their budget is ‘pro-worker’ or ‘pro-people’. But he believes that the budget is actually only for ministers, members of parliament, bureaucracy
or military but it can never be people friendly.

“People are forced to ‘buy’ justice in Pakistan,” says Mengal.

Many of the major grievances of the people of Balochistan were brought forward by the BNP-M chief in parliament today where he compared the proceedings as mere catharsis as he referred to the house as ‘Hyde Park corner’.

Akhtar Mengal fears that the government will pin their failure to come up with a better budget on the pandemic and locusts attacks in the future and calls for an explanation on whether the situation is a conspiracy to damage the 18th amendment of the constitution.

“This budget is a packet, not a package” added Mengal while blasting at the government.

He further said that the single carriage route connecting Balochistan to CPEC has witnessed so many fatal accidents that the death toll may be as much as caused by terrorism in the province if not more.

The BNP-M chief strongly criticised the mismanagement at the quarantine facility located in Taftan and demanded an FIR to be launched against those who are responsible.

According to Mengal, previously a lot of major political forces from Balochistan went into armed struggles after the treaties and promises made to them by the central governments were not fulfilled repeatedly.

One of the two PTI leaders, Jahangir Khan Tareen who signed this agreement on August 9 in 2018, seems to have fled Pakistan a few days after the recent sugar crisis report was made public.

Another agreement between the two parties was signed on development, infrastructure, education and health issues of Balochistan.

Mengal said he waited for two years before taking this step but now wants the government to treat the Baloch people as equal citizens instead of a mindset that treats them like ‘bloody civilians’ all the time as the issues of Balochistan are political.

The triggering point for Mengal seems to be the suicide of Fatima Baloch on June 13 as her brother, Imam Ishaq has been mssiing since the last several years.

“Why is the sugar crisis discussed widely in this house but the blood of Baloch not even mentioned once?” questioned Mengal.

The issue faced by Baloch students as they fail to attend the online classes during the pandemic due to unavailability of internet in most of Balochistan since the last 8 to 9 years.

Voicepk.net has been reporting on the issue since the country went under a lockdown.

When education is denied in the name of security: https://t.co/HVIfT7NlRc
brings you voices from across Pak 2 highlight how due 2 no internet access students from Gilgit Baltistan,AJK,fmr tribal areas cannot attend online classes.#OnlineJalooshttps://t.co/UkiJNJXeQl

Akhtar Mengal also mentioned the rising movement against the ‘death squad’ in Balochistan which has also been reported by voicepk.net recently. The new protest movement was sparked when a Baloch woman, Malik Naaz became a symbol of courage and sacrifice leaving behind her four-year-old daughter Bramsh Baloch badly injured.

A Baloch woman stood up against armed men, not allowing them in her house. But they opened fire killing her and injuring her 4 year old daughter Bramsh. Today she has become a symbol of courage in the province.
Read Here: https://t.co/L9zQjzSJnO
pic.twitter.com/v7C4Ll8z8n

Among many other cases of missing persons, one of the most prominent ones going viral on social media was of Haseeba Qambrani in tears and choking on her words as she spoke exclusively to Voicepk.net about how her family had first found the deformed body of one of her brothers and then her other two brothers Hizbullah and Hassan Qambrani both disappeared on February 14.

Families of #BalochMissingPersons
gather at the #QuettaPressClub
to plead for their loved ones’ recovery. June 8 has been marked as the Missing Persons Day when Zakir Majeed Baloch of BSO was made to disappear 11 years ago the same day.
Read Here: https://t.co/NXV4UEDDpF
pic.twitter.com/kK6pwEqiGQ