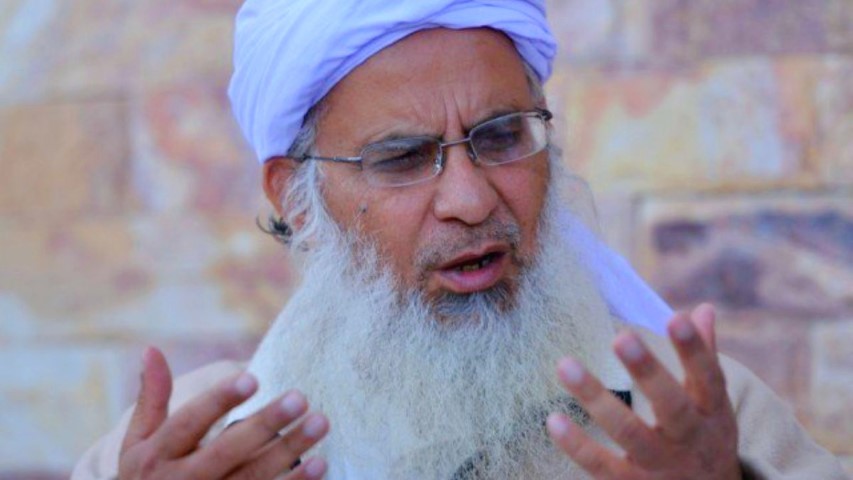 The controversial Maulana Abdul Aziz of Lal Masjid fame is firmly back in the spotlight as the government has reached an agreement with him whereby, he and his family have vacated Lal Masjid G-6 today (8th June 2020) and moved to the madrassah Jamia Hafsa in G-7, linked to the Lal Masjid. Both the mosque and seminary in G-6 are government-owned property. According to the recent negotiations, Maulana Aziz and his family will also not be allowed to enter the mosque for two months. Today, Haroon Rasheed, son of Abdul Rashid Ghazi and son-in-law of Aziz, took over the administration of the Lal Masjid.

Ahmed Ludhianvi Guarantor Of The Deal Between Government and Aziz

The deal was brokered last week with the help of Ahle Sunnat Wal Jamaat leader Maulana Ahmed Ludhianvi, who was previously banned under the Anti-Terrorism Act. Both Maulana Abdul Aziz and Islamabad DC Hamza Shafqat have refused to talk further about this agreement, but Haroon Rasheed, the son-in-law of Maulana Aziz told journalist Sabookh Syed that Muhammad Ahmed Ludhianvi acted on behalf of the government of Pakistan as a guarantor of the deal. According to the agreement, Maulana Aziz will be free to travel all across Pakistan at his own will after two months.

“Government has reached an agreement with him whereby, he and his family have vacated Lal Masjid G-6 today (8th June 2020) and moved to the madrassah Jamia Hafsa in G-7, linked to the Lal Masjid.”

Earlier in February 2020, Maulana Aziz occupied the state-owned mosque Lal Masjid, claiming to be its rightful ‘khateeb’ ( orator). The move was ignored by the authorities, until later when approximately a hundred female students of Jamia Hafsa from G-7, broke into another sealed building of a seminary at H-11. It was then that the Islamabad administration approached Maulana Abdul Aziz to resolve the matter, but the fiery cleric insisted that a Federal Minister be engaged to negotiate with him. The maulana continued to deliver an aggressive Friday sermon against state authorities, saying that he would not abide by orders of a state that followed “international agenda”.

According to sources, the Interior Ministry said that it received orders from ‘higher-ups’ to resolve differences with Maulana Aziz through talks rather than by force. Maulana Aziz’s violation of lockdown orders was even raised in the NCOC (National Command and Operation Center) during which Interior Minister Ejaz Shah said that legal action will be taken against Maulana’s provocative sermons. Two months later, instead of any action, the government has yet again decided to appease the Maulana. Even now it is not clear whether differences have been resolved or if the deadlock will linger as it has since 2007.

How The Lal Masjid Debacle Began

The Lal Masjid dispute dates back to January 2007, when Jamia Hafsa’s students illegally occupied a children’s library to protest the demolition of some mosques that were declared illegal by the CDA. Matters soared when the Lal Masjid group kidnapped three Chinese women over accusations of being sex workers. This, alongside a number of violent and antagonistic incidents, led to a bloody confrontation between the army and militants, resulting in the death of several militants and personnel of the armed forces. This clash was preceded by Maulana Aziz’s challenge to the Pakistani government’s decree by calling for the implementation of his form of Sharia and an end to collaboration with the US after 9/11.

“Today, Haroon Rasheed, son of Abdul Rashid Ghazi and son-in-law of Aziz, took over the administration of the Lal Masjid.”

It must be noted that Abdul Rashid Ghazi who was killed in the Lal Masjid siege of 2007 was subsequently praised by Osama bin Laden as a “hero of Islam” in an audio message, according to media reports. Since then, Al Qaeda and many other militant groups have used the Lal Masjid bloodshed as a justification to revolt against the Pakistani government and military.

Presently Maulana Aziz not only wants to be restored as the khateeb of Lal Masjid but also demands Rs. 250 million along with a large chunk of land to build Jamia Hafsa, as well as possession of the children’s library adjacent to the mosque. In February, the Islamabad Capital Territory reached an agreement with Maulana Aziz to let him stay in the mosque as long as he does not deliver sermons in which he was openly encouraging people not to follow government advice on lockdown and social distancing. Maulana Aziz has also demanded that the building of Jamia Hafsa, which was previously demolished for being illegally constructed on government property, should be reconstructed adjacent to Lal Masjid.

As a consequence of the military operation in 2007, the government and the mosque administration agreed for Jamia Hafsa to be reconstructed at an alternative site, to be provided by the CDA. However, in 2012, the Supreme Court canceled the allocation of the 20-Kanal plot in H-11 that was issued to Maulana for the construction of the seminary. According to sources, Jamia Sumya (G-7) was renamed as Jamia Hafsa after the latter was demolished. After the 2007 operation, Maulana Aziz and his family moved to this expanded seminary in G-7.

“The deal was brokered last week with the help of Ahle Sunnat Wal Jamaat leader Maulana Ahmed Ludhianvi, who was previously banned under the Anti-Terrorism Act.”

It is also questionable why Maulana Ahmed Ludhianvi was invited to mediate these negotiations despite belonging to a banned sectarian outfit. The Ahle Sunnat Wal Jamaat, formerly known as the Sipah-e-Sahaba Pakistan, was first banned in 2002, and again in 2012 for being involved in sectarian and terrorist activities. Despite the ban, the organization remained openly engaged in politics. The failure to take action against Maulana Ludhianvi was also noted by Justice Qazi Faez Isa’s inquiry report into Quetta’s Civil Hospital Attack on 9th August 2016.

In the last 12 months, three cases have been filed against Maulana Aziz for flouting SOPS and violating lockdown orders under section 144 (placed to limit the spread of coronavirus), 270 (malignant act likely to spread infection of disease dangerous to life) and 188 (disobedience to public order duly promulgated by public servant). According to police officials, Aziz not only led the weekly congregational prayer without taking any precautionary measures but also openly displayed weapons. Ironically, on 5th June, PM Imran Khan appeared on national television and claimed that the Tiger Force has done commendable work to ensure the implementation of SOPs in mosques and that none of the coronavirus cases were traced back to mosques.

Analysts question why the current and previous governments have refrained from taking any strict action against Maulana Aziz. Sources say that despite the latest agreements, the conflict remains far from being resolved, and in fact, the recent deal could be interpreted as a shameful surrender, as the state officials seem to be on-board with the current government.

Perhaps, the government is afraid of repeating the brutal clash of 10th July 2007 when a watershed operation between the army and Aziz’s militants sparked widespread terrorism in Pakistan and abroad. Although Maulana Aziz was arrested as he attempted to flee the mosque disguised in a burqa, he was released on bail in 2009 despite numerous indictments against him. Ever since he blatantly continues to challenge the writ of the state while the government seems more willing appease rather than arrest him.