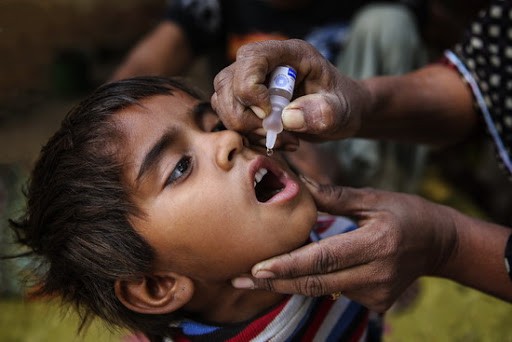 On June 1, hundreds of community-based vaccinators of the polio eradication program rallied outside the Karachi Press Club to protest against the termination of their jobs.

In 2016, over 14,000 vaccinators were hired with the assistance of the United Nations International Children’s Emergency Fund (UNICEF) to combat the poliovirus in Sindh. Out of the total number of vaccinators, 4,900 who had been employed in 89 union councils of Karachi were fired from their jobs on June 1st.

According to the anti-polio program officials, these vaccinators were hired to fight the propaganda about polio and to win the public’s trust about the polio vaccine through different awareness campaigns.

The vaccinators were hired on a contractual basis for the last four years and they had been given extensions many times. But in May, the program officials dropped a bombshell on them when they were informed that there would be no extension in their contracts as their services were no longer needed.

Perveen Hafeez, who is among those laid off said that they worked hard to make the anti-polio campaigns successful but they were shown the door without any prior information.

“We were told that our job will not end even after the eradication of the poliovirus from Pakistan. They promised to use our expertise against other diseases,” she said.

The protesters were dispersed peacefully after the program officials and health department assured them that they would be restored within 10 days.

Dr. Iqbal Ahmed Memon, a national member of the technical advisory group on polio said that these health staffers were helpful but they didn’t deliver the required results so we have decided to improve our strategy.

“People used to hide their children to avoid vaccination. But since the community vaccinators are local people they were trusted by parents, Memon said. “But the performance of this mechanism was not as desirable as we wanted.”

Pakistan is one of the three countries (Other two are Afghanistan and Nigeria) in the world where poliomyelitis (polio) is still categorized as an endemic viral infection.

According to the Global Polio Eradication Initiative (GPEI), Pakistan has reported 49 polio cases so far in the year 2020 while in 2019, 147 people were infected with this virus.
There has been a surge in attacks on vaccinators and police officials providing security to them after killing of Osama Bin Laden in Abbottabad operation in 2011. The hostility towards different vaccinations drives increased after the reports that the Central Intelligence Agency (CIA) organized a fake vaccination drive to help track down Al Qaeda’s former leader.

More than 100 people have been killed in different terrorist attacks on vaccination teams since 2012.