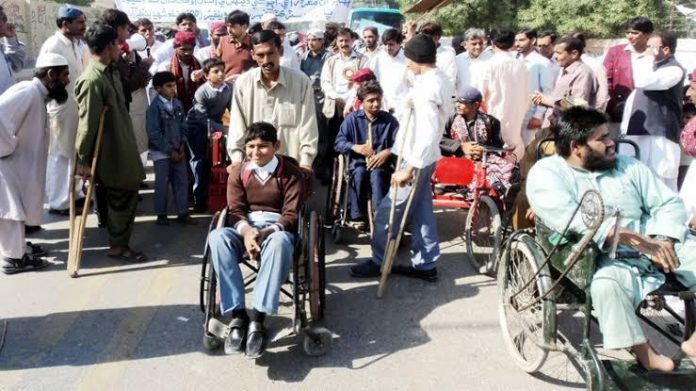 The federal government promulgated an ordinance on May 4 which amended various sections of the Companies Act and deleting section 459, which had ensured employment opportunities for people with disabilities (PWD) by allocating a 2pc quota for them in public and private companies.

Jobs quota for PWDs was raised under the government of the Pakistan People’s Party (PPP) back in 2009 but the new Companies’ Ordinance introduced by the PTI on the recommendations of Securities & Exchange Commission of Pakistan does not leave any legal obligations on companies to ensure the employment of PWDs.

The Ministry of Human Rights had introduced the ‘Islamabad Capital Territory Rights of Persons with Disability Act 2020’ which was passed from the National Assembly and was sent to the upper house for approval but it lapsed on Thursday after the three-month time period to pass the draft bill expired.

Chairman of the Senate Committee on Human Rights, Mustafa Nawaz Khokhar claims it was due to the pandemic as the committee was not able to hold its meetings.

In 2011, Pakistan became a signatory to the UN convention which ensures the right of accessibility as well as equity in education, health, and employment for PWDs.

Ministry of Human Rights’ secretary, Rabiya Javeri Agha told voicepk.net said that “Section 459 has only been removed due to its ambiguity and to avoid conflict of laws because Section 10 of Disabled Persons (Employment and Rehabilitation) Ordinance 1981 already ensured one percent employment for PWDs and then it was raised to two percent hence the new SECP ordinance cannot jeopardize these rights”.

Agha also claimed that the new ‘Islamabad Capital Territory Rights of Persons with Disability Act 2020’ has been passed by the senate committee on Human rights which ensures 5% jobs for PWDs in Pakistan.

“As soon as the new law comes out, the previous laws will be automatically overridden,” she added.

Chief executive of Potohar Mental Health Association, Zulqurnain Asghar has played a proactive role in the legislation for PWDs in Pakistan.

Asghar told voicepk.net “at least the companies act was there to make the companies bound to ensure 2% jobs for PWDs but now even that is taken away from them.”

He also said the state and especially the current government look at the fundamental rights of PWDs as some charity which makes it a bad approach altogether according to him.

“I personally gave recommendations and 29 of them were accepted by the ministry of human rights but the law and justice committee reversed it before it was approved and sent to the senate committee which could not approve it within 90 days hence it lapsed” added Asghar.

Legislation to ensure the rights of PWDs was a part of Pakistan Tehreek e Insaf’s manifesto but the living conditions seem to be deteriorating since they came into power.

Sindh and Balochistan have their own laws to protect the rights of PWDs but most of the corporations are registered with the federal institutions hence only when the federal government finally introduces a national law, most PWDs will be able to benefit by it.