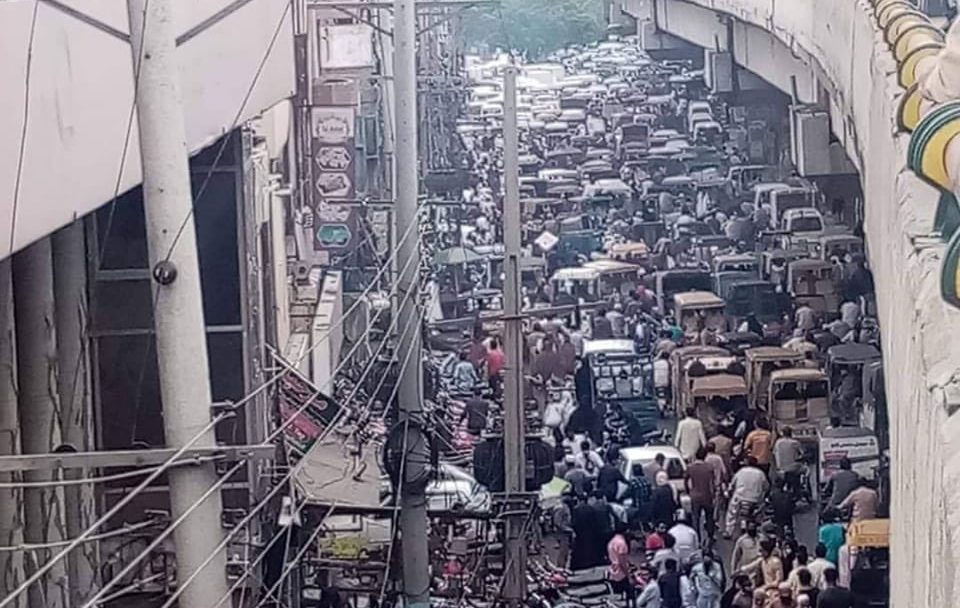 Gujranwala becomes one of the most affected areas in Punjab as more than 1,650 people have tested positive for COVID-19 in the division.

Located in the north of Punjab’s provincial capital Lahore, Gujranwala’s administration and its residents seem to be unsuccessful in following the SOPs given by the government ever since a ‘smart lock-down’ has been implemented in the province.

For instance, the city’s markets and shops are being regularly flooded by people without masks or gloves while a majority of them are not maintaining social distance as directed by the government and the World Health Organisation (WHO).

After a sample was taken by the Health Department from one of the central areas of the city near the historic Sheranwala Bagh on May 14, it was revealed that more than 30 percent of the people were tested positive.

According to the statistics given by the Commissioner Gujranwala Gulzar Hussain Shah, at least 27 people have lost their lives due to COVID-19.

But many street vendors and shopkeepers of the city told Voicepk.net that despite the lockdown being lifted, they have not been able to generate even a bare minimum of income because the number of consumers has decreased. And lack of money has forced them to violate SOPs.

“I have only made 60 rupees since the morning because people prefer going to bigger shops for buying,” says Ghulam Abbas a shopkeeper.

Muhammad Ashraf who was allowed to sell fruits after 2 months at Gujranwala’s GT Road says that he is still not able to make ends meet.

“I have seven daughters and a son so I am still waiting to receive Ehsaas cash as promised by the PM Imran Khan,” he says, claiming that he does not even have enough money to buy a mask or a sanitizer, therefore, he can only continue to sit without being able to follow the SOPs.

Many other shopkeepers and vendors say that they understand that the lockdown is the only solution to stop the spread of COVID-19 but they do not have a choice other than coming to work and putting their lives at risk, because the customers they get do not themselves follow the SOPs announced by the government.

Workers of Rescue 1122 have been working on the frontlines as usual but issues other than receiving hoax calls have also increased during the pandemic and especially under the lockdown.

One of the rescue workers in Gujranwala, Imtiaz Ashraf says, “We already had so many issues while carrying out rescue operations but even now when we reach to respond to a certain accident, a lot of people start gathering around just to see what is happening and this is dangerous.”

Imtiaz said people do not cooperate with the rescue workers even when they know they are also at high risk of getting infected.

“Not only the government but the citizens also need to take this pandemic more seriously and we have also been requesting people to stay inside for their own safety,” he added.

Despite rules and regulations, the overall situation seems to be getting worse ever since the lockdown has been eased, which puts a huge question mark on the situation. Can the government save businesses and lives at the same time or will there be more death and destruction because of the pandemic?