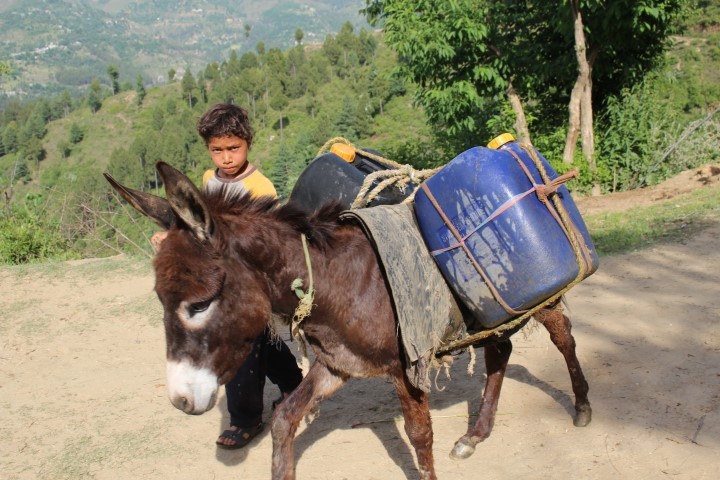 For decades the local people living in the upper parts of the country particularly Malakand and Hazara divisions have been experiencing severe water shortage for decades, forced to fetch drinking water from miles away from natural springs on donkeys.

District Battagram of Hazara division’s Kolai area which is located around 6000 feet above sea level is one of those areas parched for water.

The Kolai village council’s 750,000 population has no water supply scheme. For water, villagers must travel at least five kilometers for the nearest natural spring on donkeys where they wait for hours for their turn.

Ten year old Amin, with two gallons of water loaded over his donkey, is on his way upwards to his home.

“I regularly visit the spring along with my donkey and fetch water from the spring. After that it takes me two hours to return back home,” he said.

Amin says he has no idea how his elders brought water in the past but since his childhood, he has seen his elders fetch water from the same natural spring on donkeys and in mini jeeps but only by paying Rs 100 for per gallon.

Seventy years old, Abdur Rehman, complains that their area has deliberately been deprived of the fundamental right to clean water and lawmakers only make tall claims with them.

“I have been seeing this water shortage ever since I was a child,” he says. “Whenever it rains we rush out to fill our tanks, otherwise we have to get water from the springs.”

Abdul Faraz, a social activist, has been campaigning for the water issue for the last 20 years has also staged protests and hunger strikes at the main Battagram bazaar but has not yet been successful in his endeavors because the government has been ignorant of the problems of the area and neglectful in their attitude.

“I have knocked every door that I could find, to help in initiating a water supply scheme for Kolai village but these politicians who call themselves public servants have done nothing but make hollow promises.”

Mr. Faraz said that everybody – including women and children – had the routine job of fetching water. Their entire lives pass by like this.

Ikramullah Shah, an executive engineer of the Public Health Engineering department, Battagram, said that it was not only the Kolai area but the entire Battagram that has been experiencing serious water shortage particularly its high altitude parts.

“Only sixty percent of the population in district Battagram enjoy public health ensured water,” he said. “The rest of the masses have not been provided government schemes water because of a funds shortage,” said the XEN.

Replying to a question, he said that the same issue was also experienced by the inhabitants of Kolai. The only solution to this water crisis was the injection of millions of funds by the government in order to initiate more schemes in the upper parts.